Posted on April 3, 2015 by WNUR Sports Leave a comment

It’s another WNUR 4-on-4, as four of our broadcasters answer four questions about a newsworthy topic. This week Ryan Fish, Jason Dorow, Zach Pereles, and Will Greer discuss the Final Four. 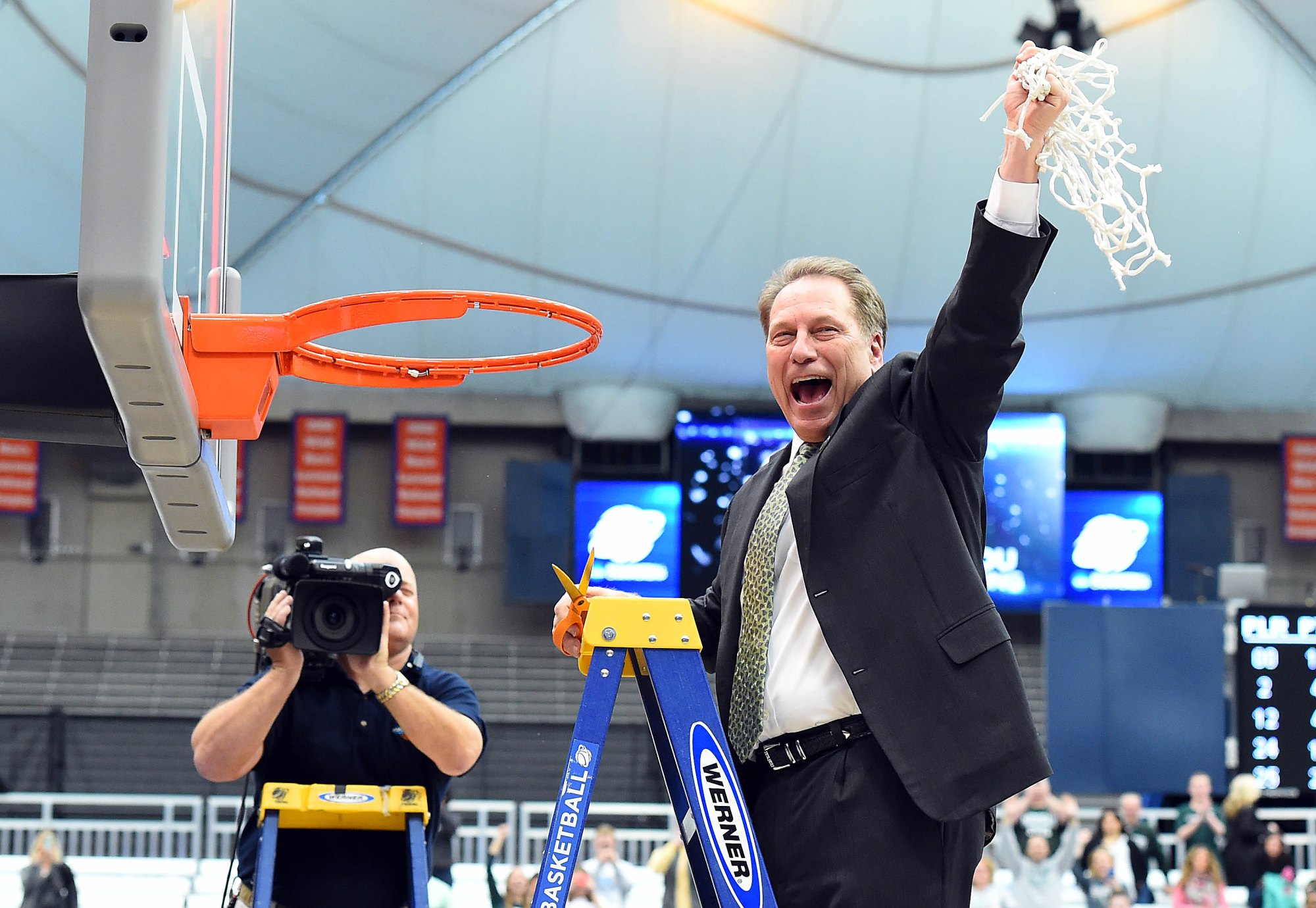 Stop me if you’ve heard this before: Tom Izzo is headed to the Final Four. Photo Credit: Rich Barnes- USA TODAY Sports

Who wins it all?

Ryan: I’m sticking with my pre-tournament pick—albeit cautiously—of Duke winning it all. Kentucky is still the obvious favorite, but the Wildcats looked vulnerable against Notre Dame and we know they are beatable. Duke’s backcourt (Tyus Jones and Quinn Cook) is, well, really good. So is Jahlil Okafor, who I think can potentially outplay Willie Cauley-Stein and Karl-Anthony Towns if they meet in the Final. Justise Winslow will need to be an X-factor to overcompensate for the Blue Devils’ lack of depth. It’s a bold pick, but I’ll say Coach K does it again.

Jason: Call me crazy, but I’m not taking Kentucky. For a while now, I’ve said that if I could take one team to beat Calipari’s Wildcat squad, it would be Wisconsin. Notre Dame proved that if you take care of the basketball and limit UK’s extra possessions, the Wildcats become rather vulnerable. And who’s the only team in the country that turns the ball over less than 8 times per game? Wisconsin. The Badgers are the most fundamental team in the NCAA, and their offense is a well-oiled machine. They only run 7-8 deep, but if they stay out of foul trouble, the upset is certainly feasible. Can’t believe I’m saying this… give me Bo Ryan and the Badgers to win it all.

Zach: took Wisconsin at the beginning and I’m sticking with Wisconsin now. Frank Kaminsky has been playing well and Sam Dekker has the size and athleticism to match up solidly with Kentucky’s guards and end the Wildcats’ perfect season, and he has been on an absolute tear over the past couple of games. I think once they get past Kentucky they’ll get Duke, and Bo Ryan’s veteran team will get revenge for their early season loss to the Blue Devils. Right now, Wisconsin is playing the best basketball—their offense is really clicking and their defense is, as always, very tough. To me, that’s the winning combination.

Will: It’s tough to go against the Kentucky Wildcats. Kentucky squeaks by Wisconsin and then trounces its championship opponent to achieve a 40-0 season and college basketball perfection.

Who’s the player to watch?

Ryan: I’ll go with Sam Dekker. After averaging a less than 13 points a game before the big dance, Dekker is scoring nearly 22 a contest in the tournament. He’s been en fuego. His shots have been clutch, too; he single-handedly assured that Arizona wouldn’t be able to come back late in the West Regional Final with five three-pointers in the second half and eight points in the final two minutes. He’ll need to be a big contributor once again in order for the Badgers to make some noise this weekend. Watch out, Calipari.

Jason: Low-key, Travis Trice has been one of the best, if not the best, players in the NCAA Tournament. He’s scoring nearly 20 points per game on 42 percent shooting. He’s played all but 11 of the 165 minutes Michigan State has seen in the big dance, and he has only missed two of 18 free throw attempts. In the 154 minutes he’s played in the tournament, he’s accumulated just eight turnovers and two fouls while primarily playing point guard for the Spartans. Seven seeds don’t make a run to the Final Four without a guy like Travis Trice, and there’s no way MSU gets past Duke without another outstanding performance from the senior.

Zach: Duke’s Quinn Cook. He’s not the star of this Duke squad, and he’s not the obvious pick, but his play has been very important. In March, it is often the backcourt that wins teams championships. Just think of last year’s Connecticut squad, led by guards Shabazz Napier and Ryan Boatright. When Cook plays well, Duke wins. He’s scored in double digits in every game this tournament, and he’s gotten to the line 14 times (and made 12 attempts) in the past two games, showing aggression going to the rim. In Duke’s last loss (to Notre Dame in the ACC Tournament), he only had seven points. Cook’s leadership, ball-handling, and shooting ability will undoubtedly play a very important albeit under-the-radar role if Duke wins it all.

Will: If Frank Kaminsky can play the game of his life, Wisconsin has a fighting chance against Kentucky. Kaminsky needs to score early and draw the attention of the Kentucky defense to open up guys like Dekker and Hayes on the perimeter. The Badgers can win it all if Kaminsky brings his A game to Indianapolis.

What has been the biggest surprise of the tournament?

Ryan: Many pundits thought UCLA shouldn’t even make the tournament, or at least needed a play-in game to make the field of 64. And yet, they made the Sweet 16, upsetting 6-seed SMU before beating UAB—a team that had just beat a “dark horse Final Four” team in Iowa State—by a considerable margin. The Bruins couldn’t quite hang with an elite Gonzaga team, but their tournament run was impressive nonetheless.

Jason: Looking through the bracket, I never thought it’d be so hard to find a huge surprise in the NCAA Tournament. And I’m going to go with the easy answer of the 3 seeds. We were only 3 games into the NCAA Tournament, and Iowa State and Baylor had already been bounced. Notre Dame nearly fell to Northeastern. Then, they turn around and almost beat Kentucky. Oklahoma was the lone 3 seed who failed to shock us at some point during the tournament, and even the Sooners fell to a 7 seed in the sweet 16.

Zach: Michigan State’s run would easily qualify as a contender for biggest surprise, but given Tom Izzo’s résumé, it should come as less surprising than any other seven seed advancing to the Final Four. So I’ll go with Iowa State losing in the Round of 64. It seems like 100 years ago that Alabama-Birmingham upset the Cyclones, but I was really high on Fred Hoiberg’s squad coming into the tournament. I had them in my championship game (oops). This was the top team in perhaps the country’s top conference two and a half weeks ago. A few days later, they were out of the tournament.

Will: The seventh-seeded Michigan State Spartans are the biggest surprise of the tournament. Sparty’s Final Four run is arguably Tom Izzo’s best coaching job in East Lansing, as Izzo has not only made a mediocre team an excellent one, but has also beaten strong competition (Virginia, Oklahoma, Louisville) in the process.

Who is the best coach at the Final Four?

Ryan: You can’t go wrong with any of the coaches in Indianapolis this weekend. But from a pure coaching perspective, I’ll give a slight edge to Tom Izzo. There’s a reason why his name is synonymous with the month of March: the guy knows how to win when it matters. This is Izzo’s seventh Final Four, and he never seems to reach this point with an overly dominant team or player leading the way. Izzo’s teams can perform in crunch time, though, and that’s all that matters. As a 7-seed and a team with an inconsistent regular season, the 2015 Spartans certainly fit that mold once again. Don’t count out Travis Trice, Denzel Valentine and co. on this big of a stage.

Jason: Choosing between these four coaches is tougher than trying to pick one cereal box at the grocery store. And there are a million options in the cereal aisle. I’m not going to take Calipari simply because his recent teams have had so much talent that his best play call is an isolation. Duke has been upset early in the tournament too many times lately, which leaves a pair of Big Ten guys, and I’ll take Tom Izzo. When they are making calendars that replace “March” with “Izzo,” you know the Spartans’ head coach is doing something right. He’s led the Spartans to 18 straight NCAA Tournaments, and in 7 of those 18 trips, MSU made the Final Four. Now, he just wants to lock up that 2nd national title.

Zach: Despite his team being undefeated, John Calipari is a great talent manager, not a great coach. Mike Krzyzewski has done a phenomenal job overcoming midseason adversity and Bo Ryan has done a great job in Madison handling an experienced team with really high expectations. But no coach has done more with less than Tom Izzo, who owns a 13-1 record in the Round of 32. He’s perhaps the best coach of this era. This year’s version of the Spartans has been undersized, inexperienced and undermanned. But Izzo is a great motivator and a terrific strategist. He has his team playing its best basketball at the best time to be doing so. It’s time to give Izzo the credit he deserves, and that might just be the title of best coach in not only the Final Four, but also all of college basketball.

Will: Tom Izzo is without a doubt the best coach at this year’s Final Four. Izzo’s strong track record in March came to life again this year, as he has taken a team that lost to lowly Texas Southern in mid-December and molded it into one of the top squads in college basketball.