Posted on April 6, 2015 by Josh Burton Leave a comment 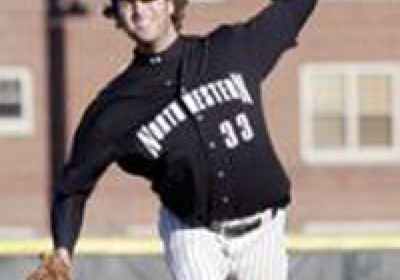 It’s no secret that Northwestern’s baseball program has gone through a bit of a rough patch in terms of success in the competitive Big Ten over the last few seasons. The Wildcats haven’t qualified for the Big Ten Tournament since 2010 and haven’t had an overall winning record since 2010.

Still, through it all, Paul Stevens has been the skipper even though the 2015 season is scheduled to be his last. He might not have presided over many stellar campaigns since his first year, 1988, but he has seen a few notable big-leaguers filter through Evanston in his time. Former Cubs and Yankees player and current Yankees manager Joe Girardi was a little before Stevens’ time but he has coached two-time All-Star Mark Loretta, reliever Mike Koplove and journeyman outfielder Mike Huff are among other lesser names to have passed through Northwestern en route to the Big Show.

Stevens has also coached a few guys in recent years who are still in the MLB and the minors. Here’s check-in on those players, ordered by MLB games played:

Happ, a north-central Illinois native, was picked in the third round of the 2004 MLB Draft by the Philadelphia Phillies after three stellar seasons at NU. In 49 college games (31 starts), he posted a 2.88 ERA with 251 strikeouts in 228.1 innings. He shot through the Phillies’ farm system before being dealt to the Houston Astros in 2010 in a package for All-Star Roy Oswalt. Happ started 41 games for Houston over parts of two seasons and then was involved in another trade, this one sending him to Toronto.

With the Blue Jays, Happ was shaky in relief during the second half of 2012 (4.69 ERA in 40.1 innings) before breaking into the rotation from 2013-14. Then, this summer, he was traded to Seattle straight-up for Canadian outfielder Michael Saunders and is now projected as the Mariners’ No. 5 starter heading into the 2015 campaign. In 164 career games (140 starts), Happ has a respectable 4.24 ERA and decent ERA+ of 93, categorizing him as a roughly average-to-below-average pitcher.

A product of Niles West High School in Skokie, right next to Evanston, Kontos was a fifth-round draft pick of the Yankees even though he finished his three-year NU career with a 5.49 ERA and more hits allowed (238) than innings pitched (219.2). Kontos only got a cup of coffee in the majors with the Yankees in 2011 before being shipped to San Francisco in exchange for catcher Chris Stewart.

With the Giants organization, Kontos dominated the hitter-friendly Pacific Coast League (Triple-A), earning a call-up to the big-league club, where he has remained since. Kontos earned a World Series ring in 2012 with the Giants–even with an uneven postseason performance–but he had a sub-2.50 ERA and sub-1.11 WHIP during the regular season. After a down 2013 season, he returned to form in 2014 but didn’t make San Francisco’s playoff roster as the Giants rolled to another championship.

For 2015, he is currently on the Giants’ 25-man roster and figures to be a key figure–yet again–in the defending champs’ bullpen.

Drafted in the 13th round in 2009 by the Houston Astros after two strong seasons with the Wildcats, in which he was a career .343 hitter in 103 games, Goebbert was sent to the Padres for fellow outfielder Kyle Blanks. He earned his first MLB chance in the second half of last season, but hit just .218 in 51 games with San Diego and is with Triple-A El Paso to begin 2015.

The Padres, who have had one of the most active offseasons of any MLB team, have built a glut of outfielders behind which Goebbert–who was NU’s Freshman of the Year in 2007–has gotten stuck.

Jokisch, selected by the Cubs in 2010 after a three-year Northwestern career, was a First-team All-Big Ten pick in his junior season after posting a 3.25 ERA and 4-2 record in conference play. He shuffled around the Cubs’ farm system for a few years before finally getting his chance with Chicago late last season, pitching to a 1.88 ERA in 14.1 innings.

Even with the strong stint in the majors, Jokisch is on the outside looking-in for the Cubs’ rotation and looks to be in Triple-A Iowa to begin the season. However, with the impressive start to his MLB career, should the Cubs lose a pitcher or two to injury, Jokisch might be heading back to Wrigley Field.

Schultz’ incredibly interesting road to the MLB took him from Men’s Journal magazine in New York to beer-league softball in Brooklyn then to Australia with the Diamondbacks. The Dallas native wasn’t even that good in college, with a 9.13 ERA in 68 career innings (he didn’t play baseball in his first two years at NU), so he wasn’t drafted but did manage to sign with the Oakland A’s as a free agent, a team that convinced him to become a sidearmer.

He then was signed by the Diamondbacks and even made their Opening Day roster in 2014, making his MLB debut in late March as the team opened up the MLB season in Sydney, Australia. This offseason, he was waived and picked up by the Blue Jays, where he hasn’t made the big-league roster yet but is on the 40-man, so a call-up in the near future isn’t out of the picture.

The son of Red Sox manager John Farrell, Farrell was a sixth-round pick of the Kansas City Royals in the 2013 Draft after a senior season in which he had the 10th-best ERA in school history. He has struggled in the pros, so far, with a combined 5.70 ERA and 1.5 WHIP in 162.2 innings over two seasons and 35 games (31 starts). He’s likely to be in Double-A Northwest Arkansas or Triple-A Omaha for the 2015 season.

Evanston Township High School product Zach Morton was a second baseman during his time at Northwestern but, after getting drafted by the Astros in the 32rd round in 2013, converted to a pitcher and was pretty good in his rookie season, allowing just 35 hits and 10 walks in 51.1 innings (1.75 ERA) a year ago. Promoted from Single-A to Single-A Advanced this past season, Morton struggled a little and was returned from Lancaster (A-Advanced) to Quad Cities (A) where his performance returned to good levels.

He’s still really young and has only been pitching for two seasons, so the upside on Morton–in a franchise without a truly established rotation or bullpen at the big-league level–is sky-high. He’ll be stuck in the low levels for the foreseeable future–barring a breakout–but he’s a name to watch for Houston heading forward.