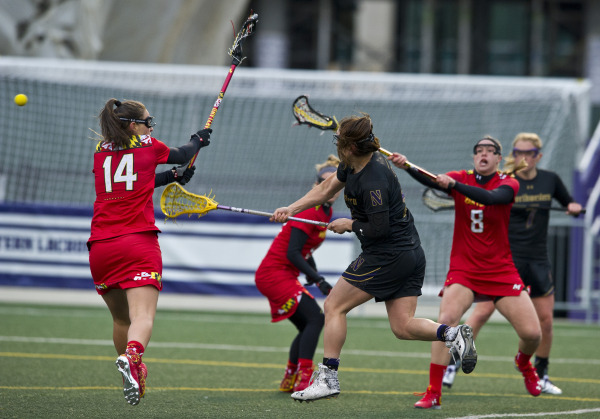 After an intense overtime win over against #11 Penn on Sunday, the #5 Northwestern Wildcats women’s lacrosse team faced a very different opponent and dominated the Rutgers Scarlet Knights, 18-6, for their fourth straight victory.

Despite the overall scoring barrage from the ‘Cats, in many ways the game started off very slowly in Piscataway. Senior attacker Kara Mupo’s struck first with her 22nd goal on the season, but on the whole, despite long periods of possession, the Wildcats struggled to find the back of the net early on. They remained scoreless for more than 12 minutes after Mupo’s first, as it wasn’t until the 15:49 mark in the first half that the ‘Cats got back on the scoreboard through junior attacker Christina Esposito.

Rutgers would tie the game at two less than a minute later, and it was only then that things really began to click for the Wildcats offense. With 13 minutes to go in the first half, freshman midfield Selena Lasota was able to squeeze past two Rutgers defenders in the middle of the fan and fire it into the top of the goal her 43rd goal of the season and a 3-2 Northwestern lead.

From there the floodgates would open up as the ‘Cats would end the half on a 6-0 run and take a 8-2 lead into the break including Corrine Wessel’s five hole shot past the Rutgers goalie.

The impressive display from the Wildcats continued into the second half, as freshman midfielder Shelby Fredericks took the ball in front of the crease and whipped behind her head and into the goal to give Northwestern a 9-2 lead and Fredericks her 10th goal of the campaign.

The dynamic duo of Mupo and Lasota again came up big in the second half against the Scarlet Knights. The senior captain Mupo continued her impressive goal scoring streak as her two second half goals brought her total to four for the game, the third time in the last four games that she has scored four goals. For the freshman sensation Lasota, she remained the model of consistency for the Wildcats, as she extended her streak of multi-goal games to 12 with two goals against Rutgers.

It’s still unclear how much we can take away from this game.  Rutgers has just one win on their entire season.  They were clearly not of Northwestern’s caliber as at times it looked like Northwestern was going through a scrimmage, getting exactly what they wanted when they wanted.  Rutgers provided, perhaps more than anything else, a bit of a breather for a Northwestern team that has played an incredibly tough schedule.  The Wildcats did exactly what they needed to do.  They buried a lesser team and, hopefully, will be able to take the positives from tonight into their games against better opponents down the road.

Northwestern (9-3, 2-1 B1G) will stay on the road for the next game as they travel to New York to take on the #7 Stony Brook Seawolves.