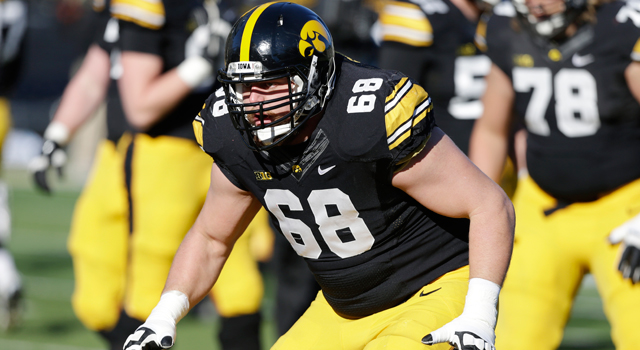 A few weeks ago, WNUR Sports’ Ari Ross (@aross50) looked at Northwestern’s graduating senior’s draft prospects. This week he takes a look at some of the top prospects out of the Big Ten.

Scherff is the top rated prospect out of the Big Ten. The 6’5” 319-pound senior tackle started all 13 games his final two seasons with the Hawkeyes, being named a consensus All-American and winning the Outland Trophy, given to the nation’s best interior lineman, his senior year.

CBS Sports ranks Scherff as the best offensive lineman in the draft class and the eighth overall prospect. He’s projected to be a first-rounder and possibly even a top 10 pick.  CBSSports scouts agree that Scherff is the most NFL-ready lineman in the draft, but disagree on whether he projects as a guard or tackle. Scherff played mostly tackle his final two seasons at Iowa.

CBS Sports’ Dane Brugler projects the St. Louis Rams to take Scherff with the No. 10 selection in the first round of the 2015 NFL Draft.

Waynes is the top rated cornerback in this year’s NFL Draft. He was a second-team All-American  and first-team All-Big Ten selection last season. He was also a semifinalist for the Thorpe Award, given to the nation’s top defensive back. Last season with the Spartans, the 6’0” 186-pound corner had 46 tackles, three interceptions and 13 passes defended.

CBS Sports ranks Waynes as the top cornerback in the 2015 NFL Draft class and the No. 12 overall prospect. He’s projected to be a first round pick, and possibly a top 10 selection as well. Brugler sends Waynes to the Giants with the ninth overall pick in his latest mock draft.

Gregory is the second rated defensive end, according to CBS Sports in this year’s draft. Gregory was ranked higher on many draft boards previously, but has fallen due to a failed drug test at the NFL Combine. CBS Sports ranks Gregory as the fourteenth best player in the draft, although he was among the top 10 before the drug test debacle.

As a junior last season with the Huskers, Gregory recorded seven sacks and 10 tackles for a loss. He was first-team All-Big Ten and a semifinalist for the Chuck Bednarik Award, given to the nation’s best defensive player. Gregory was also a third-team All-American.

Gregory is projected to be selected in the first round but could fall due to his failed drug test at the combine. Brugler has the San Francisco 49ers selecting Gregory with the No. 15 overall pick in the first round on the 2015 NFL Draft.

Gordon is the second best running back in the 2015 NFL Draft class, behind Georgia RB Todd Gurley. Last season with the Badgers, Gordon rushed for 2,587 yards and 29 touchdowns en route to being named a finalist for the Heisman Trophy and winning the Doak Walker Award, given to the nation’s top running back. Gordon was also a consensus first-team All-American and a finalist for the Walter Camp Player of the Year award.

CBS Sports ranks Gordon as the No. 22 overall player in the draft and projects him to be a mid-first round pick. Dan Brugler projects the San Diego Chargers to select the 6’1” 215-pound junior with the No. 17 overall pick in the draft.

The top-ranked tight end in the draft class, Williams caught 36 passes for 569 yards and eight touchdowns this past year for the Golden Gophers. Williams was a second-team All-American and a finalist for the Mackey Award, given to the most outstanding tight end in college football.

CBS Sports ranks Williams as the No. 28 overall prospect, and projects him to be taken in the last first or early second round. Brugler has the Denver Broncos selecting Williams with the No. 28 pick in the 2015 NFL Draft.

Abdullah is the fourth-ranked running back and No. 48 overall prospect according to CBS Sports. He’s projected to be a second round pick.

This past season with the Huskers, Abdullah rushed for 1,611 yards and 19 touchdowns. He was a second-team All-American and a Doak Walker finalist. He was also a semifinalist for the Maxwell Award, given to the nation’s top offensive player.

Davis is the seventh-ranked defensive tackle and No. 52 overall player in this year’s draft according to CBS Sports. He’s projected to be a second round pick.

The 6’5” 320 lbs senior had 36 tackles, two sacks and nine tackles for loss for the Hawkeyes last season. Davis was named second-team All-Big Ten and participated in the Senior Bowl leading up to the draft.

Smith is the ninth-ranked receiver and No. 56 overall prospect in this year’s draft class according to CBS Sports. He’s a projected second round pick.

Smith caught 33 receptions for 931 yards and 12 touchdowns his senior year with the Buckeyes including 2 catches for 87 yards and a touchdown against Alabama in the Sugar Bowl.

CBS Sports ranks Coleman as the sixth-best running back and the No. 62 overall prospect in the 2015 NFL Draft. Coleman is projected to be a late second round pick.

This past year with the Hoosiers, Coleman was a Doak Walker Award finalist, a consensus first-team All-American and first-team All-Big Ten. He rushed for 2,036 yards on 270 carries and 15 touchdowns, while catching 25 passes for 141 yards.