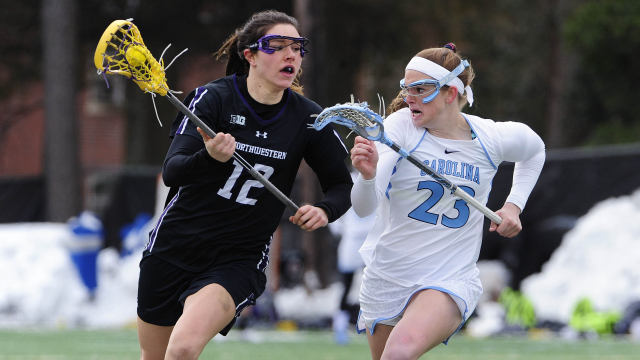 In its final road game of the season, Northwestern came from behind and scored the game’s final two goals en route to a 10-9 win at Notre Dame.

Trailing by a goal with less than five minutes left in the contest, junior Kaleigh Craig scored her third goal of the game to pull the seventh-ranked Wildcats (10-4) even at 9-9. And just over a minute later, sophomore Sheila Nesselbush scored the game-winning goal for Northwestern.

The Cats got off to a quick start, as freshman Selena Lasota scored three in a row early on to give Northwestern a 4-1 lead. Lasota then assisted on Craig’s first score of the game, giving Northwestern an early 5-2 lead.

But tenth-ranked Notre Dame (9-6) fought back. The Irish went on a three-goal, game-tying run, capped off by sophomore Cortney Fortunato’s fiftieth goal of the season early in the second half.

The two top-ten teams went back and forth and were tied at eight goals apiece until junior Stephanie Toy found the back of the net for Notre Dame, giving the Irish a 9-8 lead with just over ten minutes to play.

But Northwestern scored twice in the game’s final five minutes, clinching the team’s fourth top-ten win of the season.

Northwestern, which scored five times on just 13 shots in the second half, was led by Lasota and Craig. The two combined for seven goals and an assist.