Does Trevor Siemian have a chance of making an NFL team? 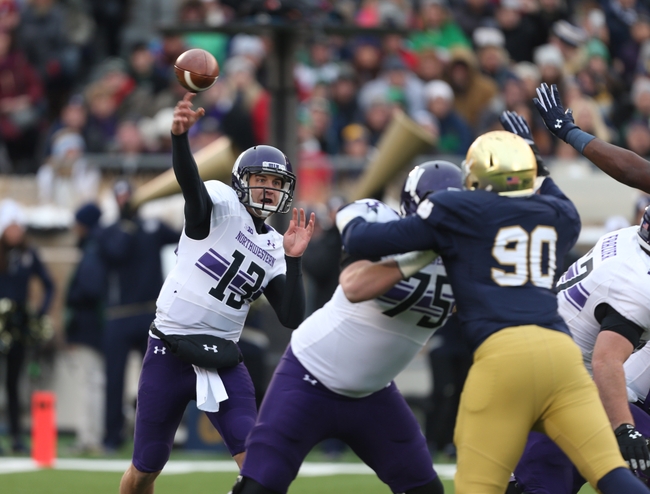 While Trevor Siemian tore his ACL in his final season with the Wildcats, he’s still getting some interest from NFL teams. Photo Credit: Brian Spurlock-USA TODAY Sports

While former Northwestern quarterback Trevor Siemian may not be the most highly rated quarterback, he does seem to be garnering some NFL team’s interest. Siemian is rated as the No. 26 quarterback and No. 510 overall prospect according to CBS Sports. He’s projected to be an undrafted free agent.

If drafted, Siemian would be the first Northwestern quarterback selected since Mike Kafka.

The Philadelphia Eagles selected Kafka in the fourth round of the 2010 NFL Draft. He proceeded to bounce around NFL practice squads before signing with the Tampa Bay Buccaneers this past season. While the Buccaneers did not re-sign him after the 2014 season, Kafka performed well at the veteran combine and signed a deal with the Minnesota Vikings, joining former Northwestern quarterback Kain Colter. Kafka is expected to compete for the third quarterback slot behind Teddy Bridgewater and Shaun Hill.

Siemian’s name has been mentioned a lot in the past few weeks leading up to the NFL Draft. A few weeks ago NFL Network’s Ian Rapoport mentioned him as a possible sleeper in the upcoming NFL Draft.

According to Rapoport, Seimian met with both the Denver Broncos and the Chicago Bears, before meeting with the Cleveland Browns last weekend.

Bit of a wildcard: #Browns are bringing in #Northwestern QB Trevor Siemian for a visit on Sunday & Monday, with dinner with the staff Sunday

The Browns are notorious for their problems at quarterback and Siemian could be an option for them as a possible undrafted free agent or even a late seventh round pick. The Browns even went a step further and worked him out in Evanston this past week, according to ESPN Browns reporter Jeremy Fowler.

NFL Draft Analyst Dane Brugler of CBS Sports’ commented in a tweet that Siemian could be a good developmental option.

@SpiderMonkey216 I wasn't too impressed based on tape, but smart, good-sized and mobile. Good developmental option

More recently, Brugler commented in a tweet that Siemian is “average across the board, not much stands out,” but he does have a high football IQ.

Siemian would join Kafka, Colter, Dan Persa and Brett Basanez as Northwestern quarterbacks who’ve bounced around with NFL teams over the past few years.

Among the five quarterbacks, Siemian has the worst completion percentage and quarterback rating. He also has the second lowest touchdown to interception ratio, only behind Kafka. Both Colter and Basanez were signed as undrafted free agents while Persa was given a tryout in rookie minicamp but injured his Achilles. Kafka was drafted in the fourth round in 2010.

Six teams attended his pro day on March 9, and along with the Bears, Browns and Broncos, six other teams have shown interest in the Northwestern quarterback.

Still it is unlikely that Siemian will be drafted, but there’s a good chance someone, whether it be the Browns, Bears, Broncos or another team, takes a chance on him as an undrafted free agent, giving him a tryout in minicamp and/or training camp.

Whether he’s taken at the end of the seventh round or signed as an undrafted free agent, its a shot for Siemian, and that’s more than a lot of other collegiate athletes get.