Covering the Bases: May 5

Posted on May 5, 2015 by Michael Stern Leave a comment

Northwestern baseball got a walk-off and a shutout to complete a 2-2 week, while softball took two of three from Iowa to secure a first-round bye in the Big Ten Tournament. Michael Stern has the details in “Covering the Bases”. 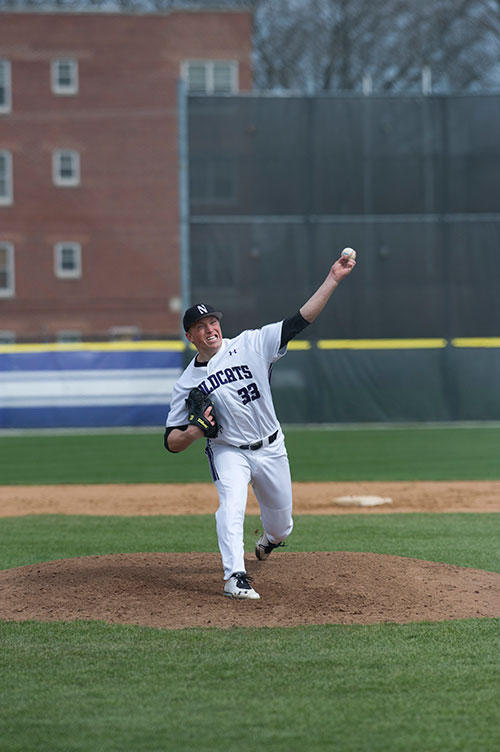 Matt Portland was solid Saturday, twirling a complete-game shutout against Nebraska. The effort earned him Big Ten pitcher of the week honors, but was certainly taxing on his arm. Portland threw 132 pitches and scattered 11 hits, all singles. He struck out eight and walked only one, picking up his second win of the season. Brandon Magallones was also solid on Friday, allowing three earned runs in eight innings. The senior struck out eight and threw 130 pitches, but was hit with a tough-luck loss as the Wildcats fell 4-2. Reed Mason was unable to build off a solid outing against Ohio State, lasting only three innings on Sunday and giving up five earned runs. Joe Schindler continued to pitch well as mid-week starter, getting into the sixth inning and allowing only two earned runs against Chicago State.

After Joe Hoscheit led off the bottom of the 10th with a double against Chicago State, Zach Jones delivered a two-out single to plate pinch-runner Luke Dauch and give the Wildcats their fifth straight mid-week win. Hoscheit had a terrific week at the plate, going for 7-for-15 in the team’s four games. Northwestern had struggled to find production out of the leadoff spot since Kyle Ruchim suffered an oblique injury, but Paul Stevens put catcher Scott Heelan into the top spot in the order Saturday, and the veteran delivered. Heelan collected two hits and scored two runs in Saturday’s win, and went two-for-four in Sunday’s loss. The backstop should stay in the leadoff spot for the upcoming mid-week set against Kansas if Ruchim remains unavailable.

Amy Letourneau hasn’t pitched in a few weeks, and Olivia Duehr has been solid filling in. The senior outfielder-turned-hurler was a tough-luck loser in last weekend’s 20-17 game, but the Wildcat offense mad her a winner Saturday against Iowa. Duehr battled through seven innings, working through 10 hits and six walks to allow only five earned runs. Northwestern’s bats provided Duehr plenty of cushion, as seniors Julia Kuhn and Letourneau (as designated player) combined for six hits and six RBI in the 11-6 win. After taking two of three from the Hawkeyes in Iowa City, NU earned the fourth seed for the Big Ten tournament, which comes with a first-round bye. Northwestern finished a half-game ahead of in-state rival Illinois, who closed the season by dropping two of three at Nebraska.

Kristen Wood has been Northwestern’s go-to pitcher since the Letourneau injury, and she hasn’t disappointed. Wood delivered five innings of two-hit ball in the Wildcats’ 12-1 mid-week win over DePaul, then came back Friday with a complete-game five-hit shutout against Iowa. NU won that Friday game 1-0 behind a homer from Kuhn, who finished the weekend with 5 RBI. The senior ends the regular season with a .336 batting average, and her 34 RBI are third-most on the Wildcats. Andrea Filler also had a solid weekend, connecting on her 12th homer of the season and driving in three.

Up next: Baseball hosts a two-game mid-week series against Kansas before heading to Ann Arbor for three against Michigan. Softball heads to the Big Ten tournament, where they will open play Friday against the winner of Thursday’s Illinois-Purdue game.