Northwestern NFL Draft Recap: Where did the Wildcats’ Prospects Land? 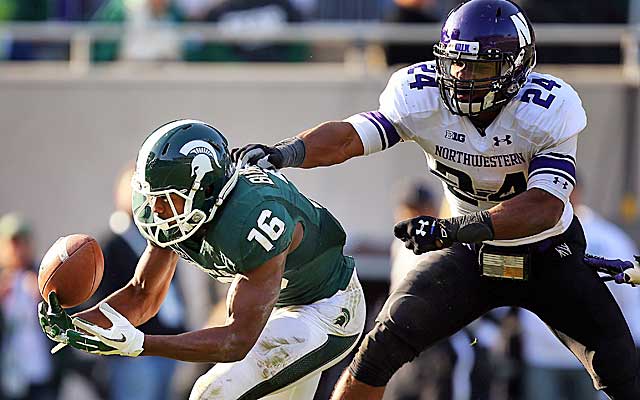 For the first time since 2012, Northwestern had two players taken in the NFL Draft. Safety Ibraheim Campbell became the Wildcats’ highest selection since the Bears chose Corey Wootton in the fourth round of the 2010 Draft, while quarterback Trevor Siemian was surprisingly selected late in the seventh round.

Siemian should compete with Broncos quarterback Zac Dysert for the third string quarterback job behind Peyton Manning and Brock Osweiler. The opportunity to play behind and learn from Peyton Manning will be invaluable for Siemian, even if it’s just for training camp. And if Manning were to retire after this season, Siemian might be given the chance to compete for the starting job. John Elway, current Bronco GM and Vice President of Football Operations (and former Denver starting quarterback), had high praise for Siemian on Twitter:

7th rd pick Trevor Siemian had a productive career as a quarterback at Northwestern. He has raw talent and we think he will develop nicely.

Campbell joins a stacked Browns secondary, including safety Tashuan Gipson Sr., who was second in the NFL in interceptions last season. Campbell joins a crowded secondary with Gipson, Donte Whitner, Jordan Poyer and Johnson Bademosi, but with Gipson possibly heading to unrestricted free agency next season, Campbell could soon be competing for a starting job in Cleveland.

Five Wildcats signed contracts as undrafted free agents and will have the chance to make NFL rosters.

Joining Campbell in Cleveland, former Wildcat wide receiver Kyle Prater signed with the Browns as an undrafted free agent. Prater could have a shot at making the Browns roster if he performs well in minicamp and training camp. The Browns are in need of receivers after losing Josh Gordon for the season due to a drug suspension and if Prater can remain healthy and reach his potential, he could be an asset to the Browns.

Another former Wildcat receiver, Tony Jones, signed as a UDFA with the Washington Redskins. Jones caught 130 balls for nearly 1500 yards and 10 touchdowns during his time at Northwestern, but struggled with drops throughout his career. With little depth behind DeSean Jackson and Pierre Garcon on the Redskins’ depth chart, Jones may have a chance to make the team if he can cut down on his drops.

On the offensive side of the ball, center Brandon Vitabile signed with the Indianapolis Colts. Vitabile earned four Academic All-Big Ten honors and was a 2014 National Football Foundational National Scholar-Athlete. He’s durable as well, having started all 50 games of his Northwestern career. Indianapolis needs improvement along the offensive line, but the Colts didn’t draft a lineman until the seventh round, so Vitabile may have a chance to make the team.

On the defensive side of the ball, linebackers Jimmy Hall and Chi Chi Ariguzo both found homes in the AFC West. Ariguzo signed with the San Diego Chargers but will have to fight for a roster spot behind Melvin Ingram, Kavell Connor, Manti T’eo, Donald Butler, and the Chargers’ two draft picks, Denzel Perryman and Kyle Emanuel. Ariguzo had a stellar career for the Wildcats, recording nearly 200 career solo tackles and posting back to back 100+ total tackle seasons in 2013 and 2014.

Hall signed with the Oakland Raiders and will join a linebacking core that includes Khalil Mack, Sio Moore and Curtis Lofton. Hall had 102 tackles (67 solo), 6 tackles for a loss, 3 interceptions and 5 passes defended in four years with the Wildcats. A very athletic linebacker, Hall will have his work cut out for him finding a spot on the solid Raider defense.