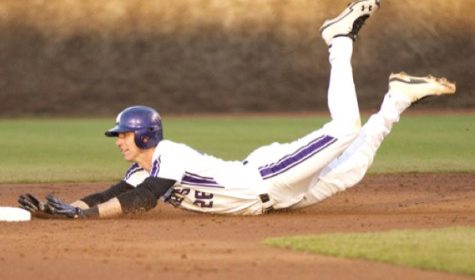 With just two Big Ten series separating them from the end of yet another losing season, the Northwestern Wildcats (15-33 overall, 5-13 Big Ten) head to Ann Arbor for a weekend set with the Michigan Wolverines (29-20, 12-9) in a meeting of teams headed in opposite directions.

NU has slogged through a rough campaign in longtime coach Paul Stevens’ swan song while Michigan has surprised many in becoming one of the Big Ten’s top teams. While the Wildcats won’t be participating in the conference tournament in two weeks, they can hurt the Wolverines’ seeding with a few wins.

Northwestern is coming off a mid-week series with the Kansas Jayhawks, in which they lost both games. On Tuesday afternoon at Rocky Miller Park, NU outhit Kansas 13-9 but had trouble converting with runners in scoring position en route to a 6-2 loss. Starter Joe Schindler got touched up for six runs (five earned) in six innings and put him team in a five-run deficit by the fifth inning.

Then, on Wednesday, Northwestern blew a 6-4 lead due to a six-run 9th inning in which Kansas’ freshman catcher T.J. Martin crushed a grand slam that sealed the Wildcats’ fate. Joe Hoscheit, partly due to a costly throwing error by Reid Hunter, got the loss after allowing six runs (one earned) as his team lost its third game in a row.

Meanwhile, Michigan eked by instate rival Central Michigan yesterday in extra innings by a score of 6-5. The win snapped the Wolverines’ two-game losing streak in which they failed to score a run against No. 16 Iowa and UIC. A suicide squeeze bunt by second baseman Eric Jacobson drove left fielder Cody Bruder home to put Michigan ahead in the tenth and junior Jacob Cronenworth–who started the game at second base–pitched a scoreless bottom half of the frame to clinch the victory.

Now, the Wolverines will look to expand on their exciting win against the scuffling Wildcats. On the hitting side, Michigan is led by sophomore Carmen Benedetti (.366/.420/.557)–who has a team-high batting average and slugging percentage and has driven in a team-leading 55 RBI–and by senior outfielder Jackson Glines, who boasts an equally nice .362 batting average and a downright crazy on-base percentage of .459. Cronenworth, with 49 games played, has started all of Michigan’s games this season, some in the field and some at the mound (13 games pitched, six started, 3.79 ERA in 38 innings).

The first game is Friday evening at 5:00 p.m. while games two and three are Saturday and Sunday afternoon. The Wildcats would surely like to get a win or two before their season-ending series next week against a ranked Maryland team.