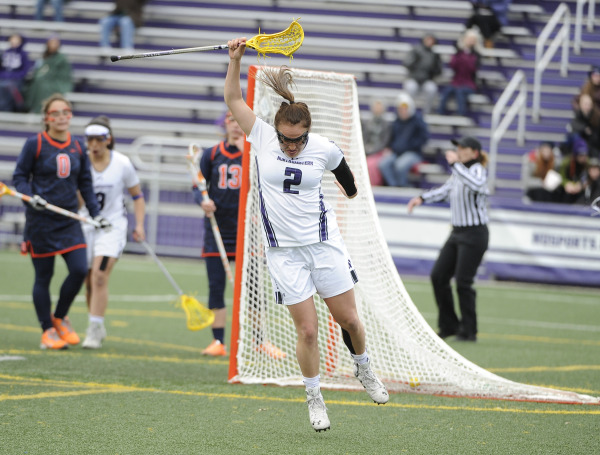 Selena Lastoa added five goals to her astounding season total of 67, and NU advanced to face Maryland in the quarterfinals. Credit: NUSports.com

Northwestern fans were worried that Northwestern wouldn’t be able to advance out of Evanston this weekend, but with a dominant second half, the Wildcats will be facing their rival, top-ranked Maryland, in the quarterfinals. Notre Dame was an extremely tough opponent, but Northwestern was able to explode late in the game and kept the Irish at bay, winning the game 16-11. After an extremely close first half that saw three goals in the last minute, it looked like anyone’s game. Selena Lasota was being covered well, so it was on Kaleigh Craig’s shoulders to keep the ‘Cats in the game. She had four goals in the first, which kept NU tied with Notre Dame 7-7 after 30 minutes. Liz O’Sullivan was keeping ND in the game with six saves, but Northwestern struggled with turnovers.

But then came the 2nd half. Northwestern went on a 4-1 run in the first seven minutes, and from there answered any ND counterattacks and added to their lead. Lasota got rid of her defenders, gaining two immediate goals, and added two later for five on the day. The freshman has scored 67 goals this season. Kaleigh Craig notched a second-half goal for a career-high five-goal game, and Sheila Nesselbush scored three after halftime and four for the game. Northwestern also dominated draw controls, getting 17 compared to Notre Dame’s 12. Northwestern doubled Notre Dame’s DCs in the 1st half, which allowed them to stay in the game despite so many turnovers. Northwestern was able to better control the ball in the 2nd, which led to more goals on their side, and less opportunities for the Irish. Northwestern now heads to Maryland to face off against the top seed Terrapins in a rematch of too-many-to-count NCAA Championship games and last year’s NCAA semifinal.