Magallones Shuts Down Terrapins in Game One 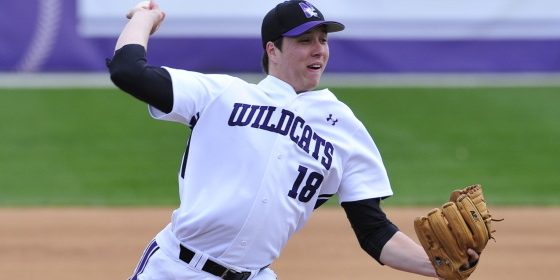 Against a Maryland team averaging over 6.5 runs per game, one run shouldn’t have been enough. But for Brandon Magallones, in what may have been his final start as a Wildcat, one run was enough. The Wildcats pitcher shut down the Terrapins, throwing a complete game shutout, leading the ‘Cats to a 1-0 victory.

Magallones had never thrown a complete game shutout before, and coming into today he 3-5 with a 6.21 ERA. Opponents were hitting .335 against him. But Magallones shut the Terrapins down.

Scott Heelan scored the only Wildcat run off an RBI double by Jack Mitchell in the fifth inning. And that was all Magallones needed. Magallones threw 90 pitches, 61 strikes, striking out seven and walking just one. Magallones also allowed just two hits to a Maryland lineup hitting .275 with 491 hits and 98 doubles.

The Wildcats face off with the Terrapins in Game 2 of the series tomorrow at 3 pm. WNUR Sports will have the call on our UStream.