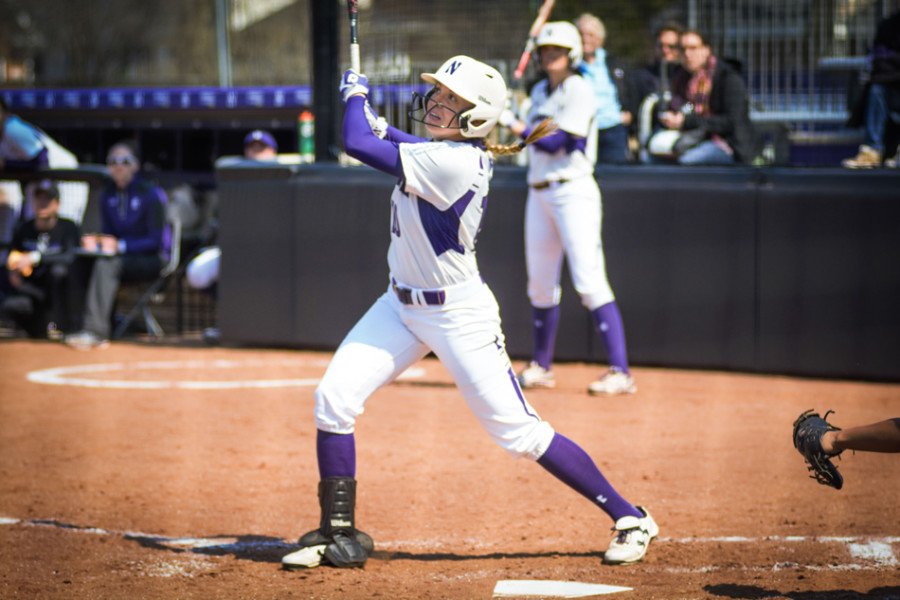 You can’t help but feel that Northwestern Softball’s biggest adversary this year was the injury table.

A team that looked very tired and very injured showed up in South Bend last weekend and, in truth, never really looked like they had what it took to get out of the regional.  Kristen Wood looked gassed after 4 innings on Friday, but had to throw a complete game, racking up a smooth 101 pitches for the afternoon.  After no-hitting Kentucky through 3, she gave up 5 runs in her last three innings of work, as Northwestern fell just short of Big Blue Nation 5-4.

The next game against Notre Dame was where the cracks in the levee gave way and the flood was on.  Northwestern put Amy Letourneau in the circle, who was still overcoming a host of injuries and had a wrist brace on when she was hitting, and she could only retire one Notre Dame hitter before being pulled.  With Wood clearly fatigued and third pitcher Nicole Bond’s leg in a robo-brace from an injury that kept her out the whole season, Northwestern had to go to Olivia Duehr.  Duehr is a solid power hitting left fielder.  She is not a solid pitcher.  After not throwing a pitch in a competitive game for her first three years of college, she was thrust into an elimination game against the top team in the region.  She gave up 8 runs (7 earned) in less than 3 innings and NU had to pitch Wood, who looked like she was around 50% of what she was the day before.

By the time the dust had cleared, NU gave up 14 runs and were run ruled after just 5 innings. Injuries ended NU’s season every bit as much as Notre Dame did. With a healthy pitching staff, this team should’ve been great.

In 2014, Kristen Wood finished 18th in the NCAA in strikeouts per seven innings.  Before missing all of 2014 with injury, Amy Letourneau struck out 288 hitters in 218.2 innings.  Nicole Bond didn’t lose a single decision her freshman year, going 7-0 with a 3.92 ERA.  Entering the year, it was supposed to be NU’s pitching and the trio of Wood, Letourneau and Bond leading the way.  Not one of those three ever looked to be 100% healthy, and both Wood and Letourneau saw their ERA’s rise significantly from their last full seasons.

What Northwestern still did have was a stacked lineup.  Andrea and Andrea (Filler and DiPrima) provided big time pop in the middle of the Wildcats order, combining to hit .393 with 22 homeruns and 107 RBI.  Both locked up All-Big Ten honors, with Filler getting on the first team and DiPrima getting on the second team.

Those two were more often than not greeted with a set table thanks to leadoff hitter, and true freshman, Sabrina Rabin.  Rabin is a treat to watch.  Any grounder to the left side of the infield is basically a single, and any single is basically a double thanks to her elite speed.  She hit .394, stole 28 bases, and earned Big Ten Freshman of the Year honors along with a First Team All-B1G selection.

When healthy, Amy Letourneau and Sammy Nettling were key pieces as well, with Letourneau hitting .360 in her 38 games played with 7 home runs and freshman Nettling hitting .315 in 30 games.  Julia Kuhn bumped her average up .106 from 2014, hitting .323 with 18 extra base hits (she had just 5 in her first 3 years as a Wildcat).  Even with Brianna LeBeau and Anna Edwards sliding back, Northwestern had plenty of hitters in the starting lineup.

Next year should be better for Northwestern, especially if the pitching staff can get healthy.  A full year of healthy Wood, healthy Letourneau, and healthy Bond should make for a pretty fearsome trio.

The big question for the team is going to be how to replace the power that is graduating.  Between DiPrima, Kuhn, Duehr, and Edwards, NU loses 27 home runs.  Rabin, Nettling, and Brooke Marquez show that freshmen can come in and play defense, run fast, and even hit for average.  It’s significantly more rare to see true freshmen come in and start hitting the ball out of the park.  Don’t be shocked if NU has some problems driving in runs next year.

·      NU’s first baseman went from a defensive specialist to an all around player who could drive the ball.  Plus she doesn’t wear batting gloves.  Huge plus.

Freshman of the Year:

Game of the Year:

Play of the Year:

·      Not a highlight reel play, but DePaul played 5 infielders to try and stop Rabin’s slap technique.  Like they didn’t play a centerfielder.  It was weird.

·      Kind of a toss-up between Filler and DiPrima, but we’ll give Filler the edge.  A really well-rounded hitter with a solid defensive game as well, Filler will be the big run producer for NU next year.