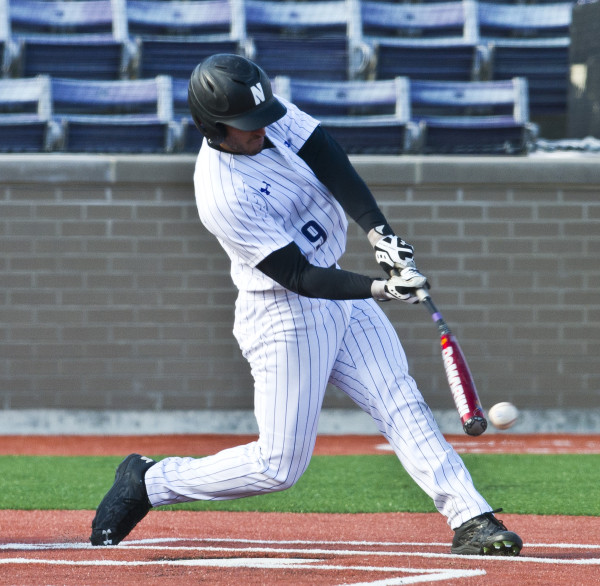 Outfielder Kyle Ruchim was a bright spot for Northwestern this season, leading the team in home runs, slugging percentage and on-base percentage.

Just as Rocky Miller Park underwent major renovations this spring that will continue into the offseason, Northwestern baseball now also enters a period of transition.

Amid an up-and-down and ultimately disappointing season for the ‘Cats, 2015 will be remembered most as the final season for longtime head coach Paul Stevens.

Northwestern went 18-36 on the year and 8-16 in Big Ten play, finishing tenth in the conference and falling short of the Big Ten Tournament. New artificial turf was installed at Rocky Miller Park early in the season, meaning that ‘Cats were only able to play 14 games in Evanston and none until April 21. Northwestern still remained inconsistent from there, however; the ‘Cats went 4-7 during an 11 game, ballpark-reopening homestand and only 6-8 overall at home.

Stevens’ 28th and final season as head coach looked bleakest early on, as the ‘Cats dropped their first six games and nine of their first 10. Pitching struggles came early and often: Wildcat pitching allowed 17 or more runs in four games this year, including a 19-1 loss to Michigan in the final week of the season. A 5.52-team earned run average was often too much for the offense to overcome.

Despite these struggles, there were certainly bright spots for the ‘Cats in 2015. Relief pitcher Jake Stolley led the team with a 2.98 ERA and seven saves. Matt Portland was the team’s best starter, looking impressive in his 14 starts. Opposing hitters only hit .299 in Portland’s 89 innings. Team captain and departing senior Brandon Magallones struggled at times but threw a complete game, two-hit shutout in a May 15 victory over Maryland, the final start of his college career.

Northwestern also had key contributors at the plate. Redshirt senior outfielder Kyle Ruchim is at the top of that list: Ruchim led the team in average, runs, home runs and slugging percentage despite missing 18 games with an upper-body injury. Catcher Scott Heelan was another senior who contributed significantly, hitting .332 and knocking in 19 runs while making the lion’s share of starts behind the plate. Ruchim and Heelan’s departures create two big holes in Northwestern’s lineup in 2016.

The ‘Cats should still have effective talent on the roster next year nonetheless. Junior first baseman Zach Jones established himself as a reliable offensive option, finishing as the team leader in hits and RBI and second in the Big Ten with 20 doubles. Sophomore Joe Hoscheit was the only player to start and play in all 54 games for the Wildcats, and he did so while maintaining offensive success. Hoscheit played in the infield, outfield and as a pitcher in 2015 while hitting .286 and driving in 28 runs. Hoscheit’s durability and flexibility will be a valuable asset for Stevens’ successor in 2016.

That being said, uncertainty surrounds this team heading into next season. The continuity that Stevens brought to the team is gone, but a fresh face and new philosophy at head coach could be highly beneficial for Northwestern. Losing Ruchim and Heelan will hurt the ‘Cats offensive production and Magallones was more than serviceable during his time in the starting rotation. Yet Jones and Hoscheit should continue to improve and become team leaders as Portland and Stolley should lead next year’s pitching staff.

If the team responds well to the new head coach, it wouldn’t be surprising to see improvement from Northwestern next season. With all the struggles the Wildcats endured in 2015, a new state of mind could go a long way toward changing any sort of “losing culture.” With a new coach comes a new learning curve, however, so expect any improvement to be gradual, and very dependent on how well Jones, Hoscheit and others can compensate for the losses of Ruchim and Heelan.

Rocky Miller Park should look new-and-improved in 2016. It remains to be seen whether the same will be true for the team that plays there.