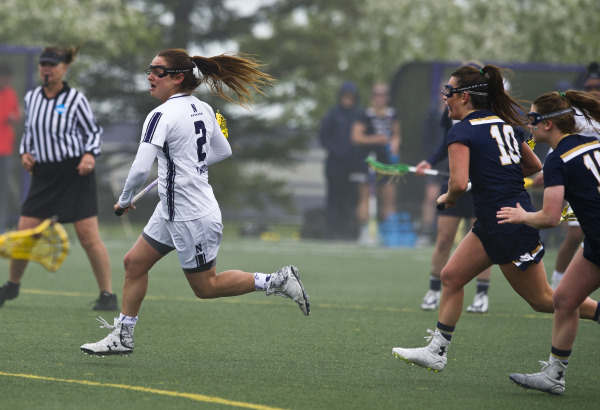 Freshman Selena Lasota led the team with 69 goals this season, but the ‘Cats were eliminated in the National Quarterfinals. Photo Credit: nusports.com

This year, we saw the end of an era. Northwestern women’s lacrosse dominated college lacrosse for the past decade. They made the NCAA Final Four every year from 2005 through 2014. What makes that streak even more amazing, and what many don’t know, is that there was no varsity women’s lacrosse at Northwestern from 1993-2003.

Kelly Amonte Hiller coached the club team in 2002 and 2003 before coaching the now-varsity team to the quarterfinals in 2004. One year later the team not only made the Final Four, but were NCAA Champions, beginning a streak of five straight championships. To put all of this in perspective, the University of Michigan has competed for two years as a varsity program and went 5-12 this year, missing the NCAA tournament.

But this isn’t a time to focus on the streak, because the streak is over. Instead, it’s time to wonder how it happened. At the end of the 2011-2012 season, Northwestern bested Syracuse to win their most recent national title. Since then, they finished as semifinalists in 2013 and 2014, and then quarterfinalists this year. Since that defeat of Syracuse in Stony Brook three years ago, the ‘Cats have slowly faded from the top spot in college lacrosse.

They didn’t suddenly lose the throne, but they slowly fell from it, culminating in this season’s big loss to Maryland on May 17th. They struggled for a lot of reasons this season, but Northwestern’s main problem, and the reason why their fall was slow, is that the ‘Cats aren’t actually much worse than they were three years ago. Everyone else just got better.

Back in 2004, Northwestern simply began playing lacrosse at a different level than everyone else. They got exponentially better, while other teams tried desperately to keep up. In the last three seasons, teams who were never too far behind like Maryland, Syracuse, UNC and Duke have caught up. In the early years of Northwestern’s dominance, these were the few elite teams who could compete with them. This year, new teams broke onto the scene, like Penn State, Stony Brook, and Boston College. Simply put, everyone else got much better at lacrosse, and Northwestern just stayed really good.

But there are also a few more problems–tangible problems–the Wildcats had this season. First, they depended too much on their stars. Really, they depended on freshman phenom Selena Lasota, and a little bit on Kaleigh Craig and Kara Mupo. Those three were able to carry the ‘cats in most games, but they weren’t enough. Three will never be enough. Sheila Nesselbush figured that out later in the season and played impressively in the second half of the year. But it didn’t seem like anyone else stepped up. When an opposing team shut down one of Northwestern’s stars, or one of them had an off day, no one was ready to provide the firepower needed to make up for it.

Another problem was draw controls. The ‘Cats got better at it throughout the season…much better. But they’ve got to be consistently good at it because, in women’s lacrosse, possession is essential. They won the draw control battle overall against Maryland, but lost it in the second half; the same half where they were outscored 11-1.

Their defense this year also struggled a bit in terms of fouling. Specifically, they gave up 87 free position shots, on which opponents converted 41 times. Northwestern received fewer opportunities from their opponents, and it felt like the ‘Cats consistently gave up free position shots all season, allowing easy offense for the other team.

The other part of the defensive equation that didn’t come through this season was the goalie. Bridget Bianco has been a star for Northwestern in her four years here. Her career will surely be remembered as a success. But, this season was a struggle for her. Nearly every season for the past ten years, Northwestern’s goalie has had a save percentage above .400. Starting in her sophomore and junior seasons, Bianco had .433 and .455 save percentages, respectively. This year, she was 75th in the nation at .392. It simply wasn’t enough for a team who had come to rely on a few more saves per game.

While Northwestern didn’t make it to Championship Weekend this year, they also aren’t about to fall off the map. This year’s freshmen were the top recruiting class in the nation. Next year’s recruits include a few US U-19 National Team members, including an incoming goalie. In a few years, with the freshman more mature and more support for the offense, we could see the Wildcats winning yet another title.