Posted on June 2, 2015 by Michael Stern Leave a comment

It’s been a historic baseball season for the Big Ten: the conference got five teams into the field of 64, and two made it through the regional round into the round of 16, two wins away from the College World Series. Here’s a team-by-team look at how the conference fared this past weekend. 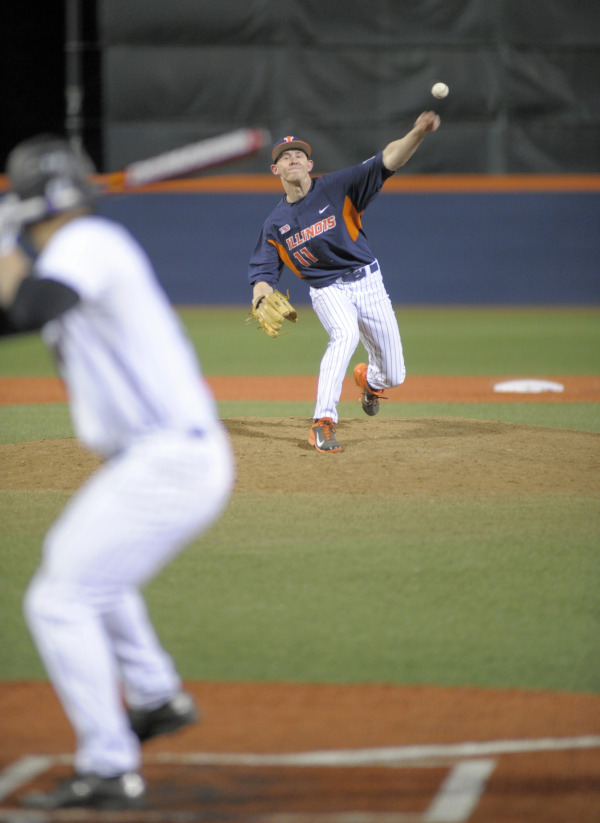 Illinois closer Tyler Jay is considered a first-round draft pick by many. Jay (shown here pitching to a blurry Northwestern batter) and the Illini advanced to the Super Regionals, one of two Big Ten teams among baseball’s final 16. Photo credit: Illinois athletics.

Maryland: The Terps have been the surprise of the weekend out of the Big Ten. Maryland started off strong with a 3-1 win over Ole Miss on Friday. Mike Shawaryn picked up his 13th win of the season, battling through five and one-third innings, allowing only two hits and one run but walking five. Lamonte Wade made the play of the day robbing Ole Miss of a homer in the eighth, and the Terp bullpen held the lead. Saturday, Maryland upset top-ranked UCLA to move within a win of the super regionals. Tim Lewis hit a bloop two-run triple and Wade smacked a long solo homer as the Terps built a 4-1 lead. Robert Galligan was excellent in relief and Maryland won by that same 4-1 score. On Sunday, UCLA knocked off the Terps 4-2 to force a winner-take-all game Monday night, despite another homer from Wade. Maryland shocked the college baseball world by beating the Bruins 2-1, behind six strong innings from Taylor Bloom and a nine-out save from Kevin Mooney. The Terps will face Virginia for a spot in the College World Series.

Iowa: The Hawkeyes played four tight ballgames in Springfield, Missouri, beating Oregon twice and losing to Missouri State twice. Tyler Peyton was brilliant on the mound in the regional opener, tossing 7.1 innings of one-run ball as the Hawkeyes beat Oregon 3-1. Iowa built a 2-0 lead the next night against Missouri State, but the Bears battled back in the middle innings to win 5-3. In an elimination game against Oregon, Hawkeye closer Nick Hibbing worked out of a bases-loaded, nobody out jam in the bottom of the ninth to keep the score tied at one. Daniel Aaron Moriel delivered an RBI single up the middle in the top of the 11th, and Hibbing held down the Ducks to move Iowa into the round of 32. Missouri State again proved to be too much to handle, building a 3-0 lead before the Hawkeyes closed to within 3-2. Closer Bryan Young got the final five outs for the Bears, ending Iowa’s season. Hibbing was terrific again in this game, as the closer worked 5.2 innings, allowing one run and one hit while striking out eight.

Illinois: The Illini swept through their home regional with wins over Ohio, Notre Dame, and Wright State. On Friday night, Illinois moved into the winner’s bracket by routing the Bobcats 10-3. Reid Roper and David Kerian homered, while Kevin Duchene needed only 114 pitches to earn his 11th win of the season with a complete-game seven-hitter. Drasen Johnson stole the show Sunday against Notre Dame, hurling a five-hit shutout to lead the Illini within a game of the super regional. Illinois got all the offense they would need in a three-run fifth, as Johnson silenced the Irish and the Illini won 3-0. Illinois had some trouble with Wright State in their final game of the weekend, but another homer by Kerian and a four-inning save from Tyler Jay allowed the sixth-ranked team in the nation to advance with an 8-4 victory. Next up, Illinois welcomes eleventh-ranked defending national champion Vanderbilt to Champaign for the best-of-three super regional.

Indiana: The weekend started out well for the Hoosiers, as Robert Dedelow homered and Kyle Hart threw seven innings and allowed only an unearned run in Indiana’s 7-1 victory over Radford. In the winners’ bracket game against host Vanderbilt, Indiana led 3-0 after two innings, but Vanderbilt rallied to tie and eventually won it 6-4 on Dansby Swanson’s two-run homer in the top of the ninth. IU lost another nail-biter in Sunday’s elimination game rematch with Radford, as the Highlanders scored two in the eighth to break a 3-3 tie and take a 5-3 lead they would never relinquish. Bullpen troubles sent Indiana home after three games with a 1-2 record, but the Hoosiers were a few key outs away from the driver’s seat in the Nashville regional.

Michigan: The Wolverines snuck into the field of 64 after winning the Big Ten tournament, and got handed the third seed in third-ranked Louisville’s regional. Michigan started out fast, using two homers from Kendall Patrick and a solid start from Matt Ogden to build a 10-1 lead en route to a 10-5 victory over Bradley. Saturday, Louisville edged Michigan in a 4-3 nail-biter. Michigan held a 1-0 lead after six innings thanks to a homer by Carmen Benedetti, but Louisville rallied to take a 3-1 lead into the bottom of the eighth. After a two-run single by pinch-hitter Kyle Jusic tied the game at three, Louisville scored the game-winning run in the top of the ninth on a sac fly which the Wolverines could have let drop in foul territory. Evan Hill gave Michigan a quality start Sunday afternoon against Radford, and the Wolverines held on to win 4-3 and advance to face Louisville in the round of 32, but Michigan ran out of pitching and the Cardinals won the regional Sunday night with a 13-4 blowout victory.