Matt Portland was selected by the Kansas City Royals in the 17th round. Photo credit: Northwestern athletics.

With the 519th pick in the 17th round of the MLB draft, the Kansas City Royals selected Northwestern pitcher Matt Portland.

The first #B1GCats off the board in the @MLB Draft is…Matt Portland, chosen by the @Royals in round 17! Congrats, @m_attyice33!

Portland finished 2015 with a 4.04 ERA, the lowest of any Wildcat starting pitcher. He struck out 68 in 89 innings, finishing with a 3-6 record. The biggest highlight of his season was a complete-game 10-hit shutout against Nebraska.

As a junior, Portland has the option to return to Northwestern for his senior season.

As the Daily Northwestern’s Alex Putterman points out, Portland is not the first Wildcat selected by Kansas City recently:

Kansas City seems to like Northwestern pitchers. They took former Wildcat Luke Farrell in the sixth round two years ago. He’s now in AA. 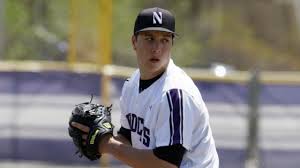 Brandon Magallones was the second Wildcat off the board, going to the White Sox in round 24. Photo credit: Northwestern Athletics.

It’s another Wildcat hurler off the board at pick 712 in the 24th round, as the Chicago White Sox select Brandon Magallones.

Brandon Magallones is staying nearby! The senior has been selected by the @whitesox in the 24th round! — NU Baseball (@NUCatsBaseball) June 10, 2015

The senior from Manhattan, Illinois struggled in his last two years in Evanston, posting an ERA above five each of the past two seasons. He did record a 3.30 ERA in 85 innings as a sophomore, and ended his career on a high note with a complete-game shutout of Maryland.

Keep it locked for updates when more Wildcats are drafted.