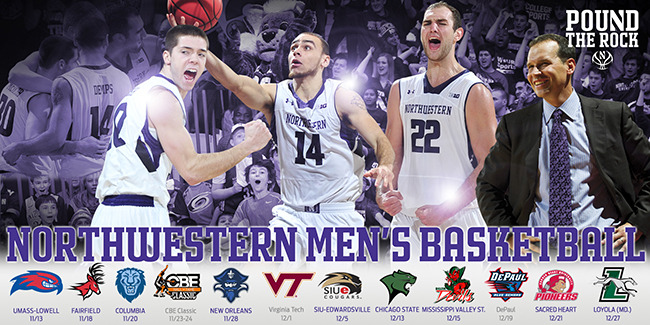 Northwestern men’s basketball has officially released its non-conference schedule for 2015.

NU will open the year against UMass-Lowell, then will follow it by taking on Fairfield and Columbia.

The headline of NU’s non-conference schedule is the CBE Hall of Fame Classic, a tournament which will host Northwestern, Missouri, Kansas State, and probable top 5 ranked North Carolina.  The specific matchups for that tournament will be released later.

The rest of NU’s schedule is pretty soft.  NU will host New Orleans then travel to ACC bottom-dwellers Virginia Tech in the Big Ten-ACC Challenge.  The Wildcats will play SIU-Edwardsville, a team Northwestern took two shot clock violations on purpose at the end of the game to avoid scoring 100 during the Bill Carmody era. Wrapping up the season will be games against Chicago State, Mississippi Valley State, DePaul on the road, Sacred Heart, and Loyola Maryland. 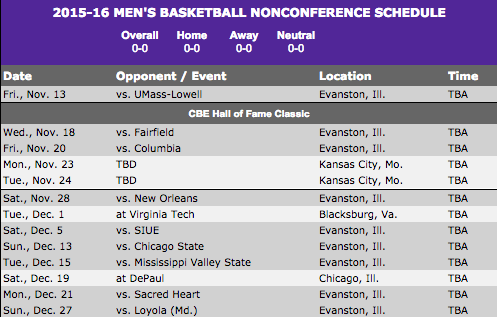 The schedule doesn’t exactly look like a recipe for a high strength of schedule, which could definitely come back to bite the Wildcats if they’re in the discussion for the NCAA Tournament.  Northwestern will be banking on cleaning up against lesser competition in non-con play before getting ready to face what looks to be a frighteningly deep Big Ten.