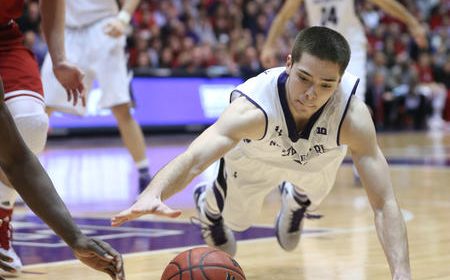 Northwestern’s newcomers have reported to campus.  This year’s class, freshmen Jordan Ash, Dererk Pardon, and Aaron Falzon along with graduate transfer Joey Van Zegeren come in with high rankings and equally high expectations.  But after NU’s super-class of a year ago, the question is: which class will have a more productive first season: 2014 or 2015?

Ben Goren: It’s hard to complain about the output of Northwestern’s freshmen last season.  Bryant McIntosh pulled an all-freshman team selection (a team that included the 2nd overall pick in the NBA Draft D’Angelo Russell, along with McDonald’s All-Americans Melo Trimble and James Blackmon), Vic Law came on strong in the second half, Scottie Lindsey showed flashes, and the combination of Jeremiah Kreisberg and Gavin Skelly played an acceptable role as backups to starting center Alex Olah.  The results on the court in terms of wins added weren’t huge, but imagine where that team would’ve been with even a mediocre recruiting class.  The trio of Law, McIntosh, and Lindsey combined to start 59 games with McIntosh playing north of 33 minutes a contest.

Next year’s class is pretty highly touted too.  The class is headlined by top 100 recruit Aaron Falzon, a true stretch 4 out of Massachusetts.  NU also added local combo guard Jordan Ash and 6-8 center Dererk Pardon.  NU is also getting a little more international with graduate transfer Joey Van Zegeren coming from Virginia Tech.  The class of 2015 is deep in the frontcourt, and Ash just might be asked to run the point when McIntosh needs a breather.  So Jason, what do you see in this group that has you so excited?

Jason Dorow: First and foremost, there are two newcomers in this class that are unlike any player on the Northwestern roster in the last couple years. Aaron Falzon is a 6-foot-7, 220-pound stretch four who can stroke the three ball from anywhere. Yes folks, we’re talking Jimmer range. Plus, he’s an adequate defender and can score on the drive. Falzon probably won’t put up McIntosh-like numbers from his freshman season, but he’s really going to open up this offense. No longer will the Branden Dawson’s and the Nigel Hayes’s of the world be able to camp in the paint and protect the hoop. Falzon will pull them 20 feet from the basket, which will make getting to the rim so much easier for everyone else.

On the other end of the court, the ‘Cats add Joey van Zegeren. Last year, NU got Jeremiah Kreisberg, who they quickly realized was not going to contribute much due to his limited offensive skill set and inability to defend Big Ten posts. If the off-court issues are over, that won’t be the case with van Zegeren. He can protect the rim, and he can rebound. Van Zegeren was averaging 9.8 points, 5.3 boards and 1.4 blocks in just 20.4 minutes per game before transferring from Tech. And he can do mean things to a basketball hoop, like this and this. Ben, you’re the NU sports history expert. You’ll have to remind me of the last time the Wildcats had a 6-foot-10 guy with that kind of bounce.

Ben Goren: Mike Capocci was like 6-8, does that count?  As a side note, whoever is reading this and remembers Mike Capocci can win 50 internetbux by DMing us on the twitter.

I’ll give you Van Zegeren.  He’s going to be a massive improvement on Kreisberg.  But how much is he really going to play?  Olah might well be Northwestern’s 2nd best offensive option and he needs to be on the floor nearly 30 minutes a night.  That leaves 10-15 for JVZ.  And good luck playing them together.  Olah isn’t mobile enough to be a high post kind of player and Van Zegeren doesn’t have a jumper.

I’m also not quite as high on Falzon as you are.  Northwestern basically plays with a stretch 4 anytime Sanjay Lumpkin isn’t on the floor.  Whether it’s Nate Taphorn or Vic Law (who did finish in the top 10 in the conference in three-point shooting in Big Ten games), Northwestern went with a three-point shooting forward for the 17.5 minutes per game Lumpkin was on the pine.  Falzon will be a defensive upgrade from Taphorn and he’ll allow Law to slide over to his more natural 3 position, but it’s not going to revolutionize Northwestern’s style of play.

Falzon is the only person I think could be a starter of the three this season unless someone goes down with injury.  Ash should see the same kind of minutes Sobolewski played last season and Pardon might straight up replace Skelly.  That plus JVZ doesn’t seem as important as the serious minutes that last year’s new guys played.  42% of all minutes played last year were played by newcomers.  On pure court time alone, there’s no way this crew matches that.

Jason Dorow: This year’s group definitely won’t contribute as many overall minutes as last year’s, but three of the six newcomers in 2014 rarely played significant minutes. Skelly, Vassar and Kreisberg played very little in close games, and even when they did play, their impact on the game was minimal. At least three of the four players joining NU in 2015 will be key this season.

Falzon should step right into the starting lineup and play about 20 minutes, if not more, per game. And I think JVZ will play more than you expect. There’s no way Olah puts in nearly 30 minutes per night over the last two seasons if NU had a legitimate back-up center. Getting JVZ in there 12-18 minutes per contest, depending on the matchup, could conserve energy for Olah and create a real two-headed monster in the post.

Jordan Ash is a really underrated addition too. He can run point with McIntosh on the bench and be the athletic two-guard with strong handles that NU currently lacks, so I’d bet he gets more than Sobo’s 2014 minutes. Dererk Pardon probably won’t play much, but he’s a third option at center if Olah and JVZ are in foul trouble.

In 2015, three newcomers are going to play significant roles, and two of them bring skill sets that can bolster NU on both ends. Their minutes won’t match last year’s additions in quantity, but they’ll be a step up in quality.