Rutgers is not a Big Ten team until they start winning 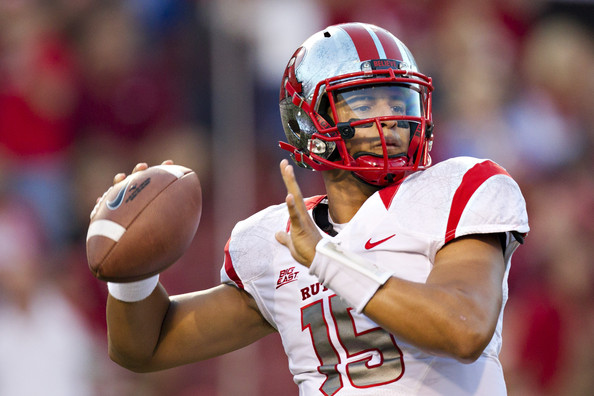 Rutgers will have to adjust to life without quarterback Gary Nova this season.

It takes time to adjust to a new place, a new job, a new family member.  Maybe that’s why I still think Rutgers isn’t really part of the Big Ten yet.

Something makes Rutgers different than everyone else.  Sure I didn’t like it when Nebraska joined, but they were so clearly “one of us,” and to their credit, they draped themselves in the Big Ten flag pretty quickly.  Maryland is pretty high in the snobbery department right now after making a bowl, competing for the men’s basketball conference championship, and going undefeated in conference in women’s basketball, but in a weird way it’s actually helped them integrate.  You can hate Maryland, but odds are they’re better than you in something important.

Rutgers has exactly none of those things going for them.  They’re not a Big Ten school in terms of geography like Nebraska or culture like 1990 newcomer Penn State.  They’re not even good at anything like Maryland is.  Their football team is going to be bad this year.  Their basketball team was literally the worst power conference team in the country last year according to KenPom and they’re losing their top three players from last year. They are horrible at every revenue sport.

Rutgers, more so than any other team that has switched conference allegiances to join the Big Ten, wreaks of a cash grab.  For Rutgers, they left the disintegrating American Conference to get a piece of the ever growing Big Ten Network pie.  For the conference, they saw Piscataway, New Jersey as a way to crack into the New York media market (which is freaking hilarious as New Yorkers haven’t cared about college football since ever).

At it’s simplest level, money is why every team switches conferences.  But there’s something to be said for having a cover story.  Try and make an argument for Rutgers joining the Big Ten that doesn’t involve mentioning the Big Ten Network’s checkbook.  It can’t be done.

The only way Rutgers can really become part of the Big Ten is to start kicking some butt.  And that ain’t happening.  Rutgers’ projected F/+ ranking is 79th in the country, behind every Big Ten team not named Indiana.  They return a host of bodies at the skill positions, but lose their starting QB Gary Nova.  It’s going to get worse before it gets better for Rutgers in a stacked Big Ten East.

The good news for the future is that Rutgers is sitting on a football hotbed.  Despite having a  small population, New Jersey had the 10th most top 100 football recruits in the 2015 class.  If Rutgers can own or at least have a large market share of the New Jersey talent pool, there’s no reason they can’t be a very solid football program.  Say what you want about New Jersey, but Piscataway isn’t any less attractive of a location than Champaign, Illinois or Iowa City, Iowa.

That’s not happening yet.

Until that happens, Rutgers is still going to be a second rate program.  And if Rutgers doesn’t start actually rubbing elbows with the best of the conference, they’re still going to be kept at the kid’s table.