Kevin Wilson changed the way offenses work. Can he save Indiana and his job? 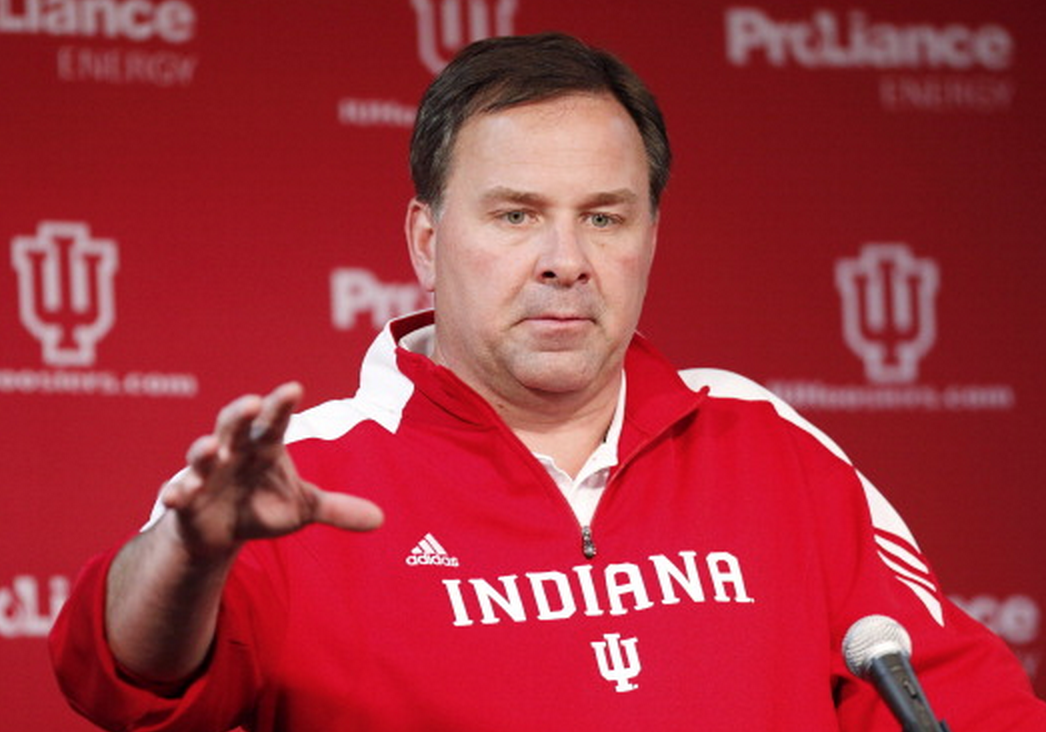 Kevin Wilson enters his fifth season at Indiana sitting on the hot seat.

Kevin Wilson has a really tough job at Indiana.

When’s the last time anyone really cared about Hoosier football?  Antwaan Randle El?  Kevin Coleman came through Indiana without once making it to a bowl game.  They’ve had some explosive players in the last few years under Wilson, but the team hasn’t taken off.  In Wilson’s first season, the Hoosiers went just 1-11, but in 2012 and 2013, the team improved, finishing just one game away from a bowl appearance in 2013.  But last year saw Indiana move backwards, finishing at 4-8 and just 1-8 in conference.

It’s not looking much better for 2015.  Defensively, Indiana was a mess last year.  Their defense ranked 91st in S&P+ rankings and finished 102nd in points allowed per game.  The good news is that most of the guys who were on that defense are gone.  The bad news, is that what’s behind them might not be much better.

On the other side of the ball, Indiana loses Tevin Coleman, who might have had legitimate Heisman hype if he were on a team that didn’t suck last year.  They replace him with Jordan Howard, a transfer from UAB who rushed for over 1500 yards and 13 scores last year, but even with Nate Sudfield back, the offense isn’t in great shape with the top 2 receivers graduating as well.

The idea of a bad Kevin Wilson offense is hard to imagine.

Wildcat fans with any tenure remember Wilson’s short time at Northwestern as offensive coordinator fondly.  Wilson was one of the pioneers of the original spread that would come to take over the world of college football.  What he did at Northwestern was stupid good.

His first season in 1999 wasn’t good.  The Wildcats went 3-8, Zak Kustok split time at quarterback with Nick Breikbrink, and Damien Anderson rushed for only 3 touchdowns.  That would be the last season that a Kevin Wilson offense would be anemic.

In 2000, Northwestern’s offense was terrifying.  They averaged 475 yards of total offense a game.  Last season, Northwestern only gained more than that once, and it took them bonus football to do it in South Bend.  Zak Kustok was Kain Colter 2.0.   He threw for almost 2400 yards and had 19 TD’s to just 7 interceptions.  On the ground, he was even more electric, rushing for 505 yards and 9 touchdowns.  Damien Anderson finished 5th in the Heisman voting and was a Doak Walker finalist thanks to his 2063 rushing yards, 23 touchdowns, and insane 6.6 yards per carry.

No body could slow down the NU offense.  They put up 47 points in Camp Randall.  37 in East Lansing.  41 in the Metrodome.  54 on the 12th ranked Michigan Wolverines in Evanston.  And just for kicks, slapped 61 on Illinois and took the Sweet Sioux Tomahawk (the precursor to the Land of Lincoln Trophy).

The next season, the magic had left, but the offense still pumped out points.  The Wildcats would average 443 yards a game, but would go just 4-7.

After that, Kevin Wilson left to go to Oklahoma to serve as the Sooners’ offensive coordinator.  The Sooners wouldn’t come in worse than 3rd in the Big 12 in his nine seasons in Norman.  It was from there that Wilson left to try his hand at head coaching at Indiana.

There’s no denying that Kevin Wilson has one of the brightest football minds, at least offensively, in the conference, if not the country.  But the word has gotten out on how to slow down the spread.  Whether or not Wilson can adjust and squeeze six wins out of an under-talented Indiana squad will determine whether or not he’ll still be the head ball coach in Bloomington in 2016.