Northwestern vs Illinois and the rivalry game that isn’t 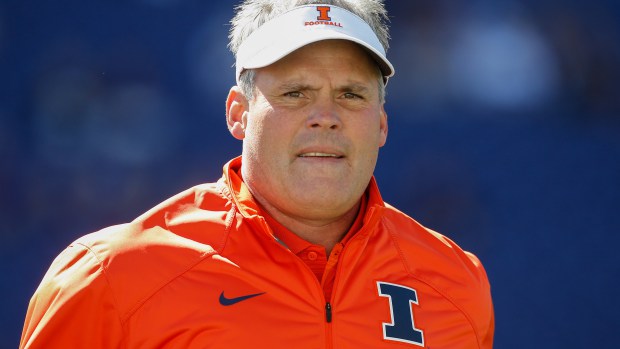 Northwestern vs. Illinois is not a rivalry, and it’s not for lack of trying.

Tim Beckman has done everything he can to “make fetch happen,” so to speak, and create a rivalry where there isn’t one.  He won’t refer to Northwestern by name, instead calling NU “that school upstate.”  Fittingly enough, this is clearly ripping off Ohio State’s Woody Hayes referring to Michigan as “that school up north.”  Tim Beckman makes injured players wear purple, which can be taken as either a reference to the litany of injuries at Northwestern or, more likely, is suggesting that if you’re hurt and can’t play, you are bad and thus should be wearing purple.

Boy, who could imagine why Mr. Beckman is in hot water.

What makes a rivalry a rivalry is in the fanbase.  Players can chirp, coaches can run up scores, but until the majority fans start caring about one game more than any other, it’s just not going to matter.  Both the Fighting Illini and Wildcat fanbases don’t fill their stadiums in the same way Nebraska or Ohio State do.  Illinois filled, on average, just 68.5% of its stadium last year, which was second worst in the conference, just edging out Purdue (who filled 62.5% of Ross-Ade Stadium last season).  Northwestern filled 81.9% of Ryan Field last season, good for 11th in the conference.

Those numbers don’t tell the whole story.  Northwestern is a destination for Big Ten fans.  It’s close to Chicago, it’s a friendly atmosphere and, at least the last two seasons, you’ve got a good shot at watching your team win on the road.  It’s not entirely surprising that NU gets out-crowded every once and a while in its home building.  As for Illinois, well, there’s no way you can tell me that 20% of this stadium is filled, forget about 69%.

One of the perks of being a Northwestern student from Illinois is that my friends and I are supposed to be the kind of kids who care deeply about the Land of Lincoln Trophy.  I know a ton of kids who go to school in the cornfield city of Urbana-Champaign.  I don’t hold any Northwestern victories over the Illini over their head, nor do they Illinois victories over mine.  It just doesn’t seem to matter.

ESPN’s attendance figures bear this out. Since Mikel LeShoure ran for almost 500,000 yards against Northwestern at Wrigley Field in 2010, only one Illinois vs Northwestern game has beaten the average home attendance for either school.  In 2011, 53,000+ fans filed into Memorial Field, putting the attendance at 87.7% of capacity.  The last two times the games have been at Ryan Field, in 2012 and 2014, 68.7% and 66% of the stadium was full respectively.  The last time it was at Memorial Field in 2013, the building was at just 61% capacity.