WNUR 1-on-1: The Harbaugh Effect 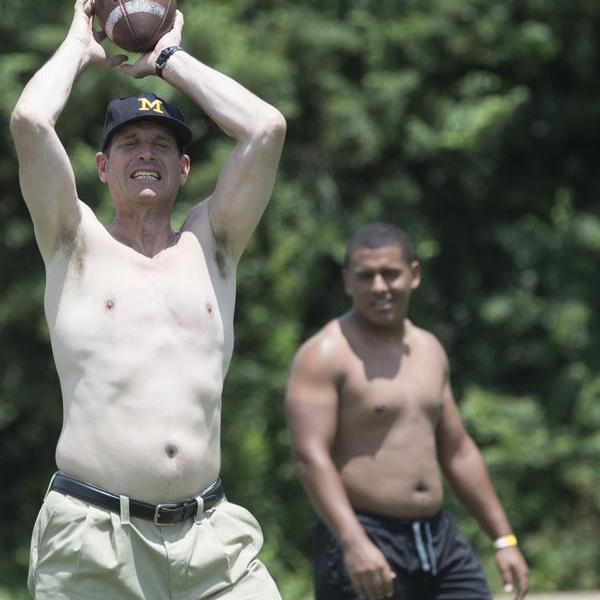 After the failed regimes of both Rich Rodriguez and Brady Hoke, Michigan looks to get back to their winning ways this season under new coach Jim Harbaugh. Harbaugh most recently was the head coach of the San Francisco 49ers, leading them to a Super Bowl appearance as well as another 2 NFC title games. Before that, Harbaugh coached at Stanford, leading the Cardinal to the 2011 Orange Bowl. Opinions on how Harbaugh’s first year in Ann Arbor are varied. As a whole, WNUR’s staff predict Michigan will go 8-4 (4-4 B1G). However, two outliers are Austin Miller, who predicted Michigan will finish 4-8, and Max Gelman, who said the Wolverines will end up 11-1. They go 1 on 1 to debate just how Michigan’s year will go.

Austin Miller: There’s no doubt Jim Harbaugh is a good coach. His success at Stanford and with the Niners showed that. However, I don’t think that means he’ll be successful right away. Michigan went 5-7 last year, a pretty unimpressive total. Most of the players from that squad are back in the fold this year,  so Max, just why do you think Harbaugh can turn that group of guys from 5 wins to a national title contender?

Max Gelman: Austin, I call it the Harbaugh effect. Jim Harbaugh is one of the greatest coaches of this generation. He turned around a 6-10 49ers team in 2010 into a Super Bowl contender without any huge personnel changes – how many people after the 2011 lockout expected Alex Smith to lead a team to the NFC title game? Nobody. Harbaugh was the biggest reason for San Francisco’s success over the past few years, and even though his first two years at Stanford weren’t great, his Cardinal still upset the 2nd ranked USC Trojans on the road. What’s not to like about him aside from his $8 khakis?

Austin: Personally, I think khakis are a very stylish choice, and the cheaper the better. Look, I’m not questioning Harbaugh’s credentials as a coach. He’s a good coach and I think he’ll be successful at Michigan. But I don’t think that success will come this year. Harbaugh struggled early on at Stanford, and I think he’ll struggle early at Michigan. Don’t forget that Michigan plays a pretty tough non-conference schedule this year. It’s not 4 easy wins. The Wolverines open with a tough road trip to Utah, followed by a home game against another Pac-12 team in Oregon State. The easiest game, home to UNLV is next, and then it finishes with a game against a BYU team that’s always dangerous. I don’t think it’s crazy to say that Michigan could easily be 1-3 following that stretch. The Big Ten schedule is difficult as well, with primetime trips to Minnesota and Maryland, as well as a brutal closing stretch which sees Michigan play both Penn State and Ohio State. I wouldn’t be shocked if Michigan is only able to beat Rutgers and Indiana in conference. I think their schedule is one of the toughest in the nation, not exactly what a brand new coach is looking for. The schedule doesn’t scare you, Max?

Max: I think the only problem that the Wolverines might have is with Utah on the road. Other than that I see no issue with the schedule. As mentioned earlier, I predicted that Michigan will go 11-1, losing to either Penn State or Ohio State at the end of the season. Despite the Buckeyes’ championship last season, the Big Ten is again one of the weaker Power 5 conferences. In terms of the roster, Michigan right now has a troubling quarterback situation, but Ty Isaac, their newest transfer from USC, is exactly the type of running back to fit a Harbaugh scheme. Isaac is 6-foot-3 and 240 lbs, similar in physique to Frank Gore in San Francisco and Heisman runner-up Toby Gerhart back in Harbaugh’s Stanford days. Austin, what do you think of Isaac? And are there any other gaping roster flaws in your mind?

Austin: Isaac is a good player, and he certainly has the body to fit Harbaugh’s system, but I think overall the system adjustments will be tough for Michigan. It’s tough as a player to be recruited to play one system only to have to unlearn that system and re-learn an entire new one. On top of that, I don’t see a Big Ten quality quarterback on the roster. It looks as though Jake Rudock, formerly of the Iowa Hawkeyes, might win the starting job. Rudock’s not a bad quarterback, but he’s certainly not an elite talent that can singlehandedly lead Michigan to the CFP. He’s more of a game manager, and I believe with the tough schedule that faces the Wolverines, a game manager won’t be enough for them to go 11-1, let alone make a bowl game. For me, when you add the schedule concerns on top of the new scheme and the lack of an elite talent behind center, I just can’t see how this Michigan team makes a bowl game. Max, you get the last word, tell me why Michigan won’t just make a bowl game with Rudock playing QB, but will compete for a spot in the CFP.

Max: The biggest reason that the Wolverines will compete for a spot in the CFP is the defense. You don’t need a great quarterback to win a national championship, as Alabama has demonstrated multiple times (AJ McCarron was good, but he was never in the running for a Heisman). Last season, Michigan allowed the seventh fewest yards per game and Harbaugh can only take them to new heights despite the scheme change. That’s why he’s so good. In terms of personnel, I really like new recruit Tyree Kinnel, a four-star safety from Ohio. 247sports.com rates his closing speed as a 9 out of 10 and instincts 8 out of 10, and overall the 11th best safety recruit in the country. Jabril Peppers is another defensive back who could make a huge impact this year after being redshirted a season ago. Finally, nose tackle Bryan Mone, 2014’s breakout Wolverine, has somehow added more weight to his 6’4” 325 lbs frame and coming off his successful freshman year he can be a staple on the front end. Of course, all of these predictions will go out the window once the season starts, but it’s been fun Austin. Only a few more weeks until college football.