Posted on August 3, 2015 by WNUR Sports Leave a comment 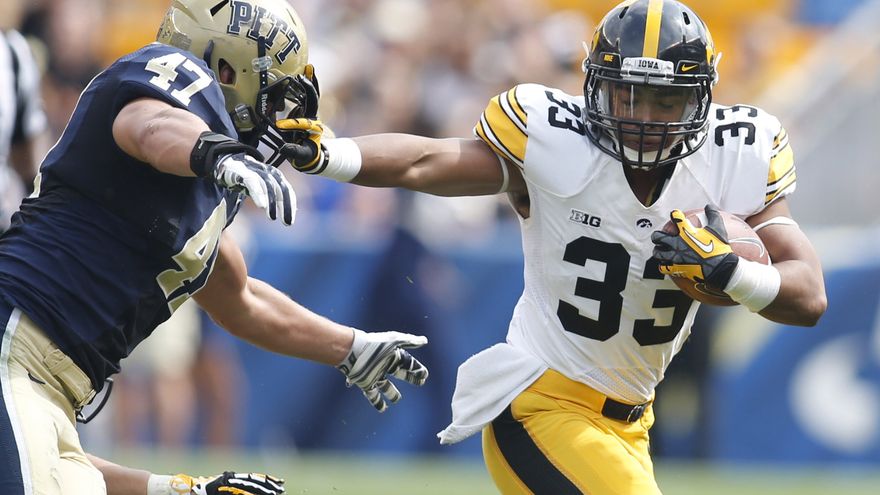 Our Big Ten preview series is back. Over the next few weeks, we’ll make our way through the Big Ten East and West from the bottom to the top.  The countdown continues with the Iowa Hawkeyes.

Our own Alex Lederman looks at a team that hopes to compete for the Big Ten West crown.

Iowa’s offense was a major disappointment in 2014—the Hawkeyes finished 71st in the nation in scoring offense and 66th in total offense. Only five offensive players were named to an All-Big Ten team.

The Hawkeyes look worse overall on paper this year, but they still might be better. Last year, the team underperformed, and this year, it has a new leader.

Iowa’s quarterback controversy is all worked out. Last season, Jake Rudock served as the starter for the Hawkeyes to serviceable results, but Hawkeye fans (notoriously the worst) clamored for the higher ceiling C.J. Beathard. By the end of the season, the two QBs split time, and coach Kirk Ferentz named Beathard 2015 starter in January. Rudock turned quite a few heads when he announced afterward he was transferring to Michigan. Even so, questions surround Bearthand’s accuracy and communication skills.

Questions also persist in the run game, arguably the team’s worst unit last year. Senior Jordan Canzeri, who rushed for 513 yards last season, will replace Mark Weisman as the primary back. But Canzeri had a disappointing spring and is injury prone. Don’t be surprised if Akrum Wadley, the flashiest of the bunch, has the most carries by the season’s end.

The Hawkeyes don’t really have many people to catch the ball either. The team will look primarily to receivers Tevaun Smith, Matt VandeBerg and Jacob Hillyer, and tight end Jake Duzey.

The biggest hits come on the offensive line, where the Hawkeyes have to replace top-5 draft pick Brandon Scherff and Andrew Donnal. Sophomores Ike Botteger and Boone Myers will look to fill the voids, but there’s no doubt the Hawkeyes will take a hit.

Iowa looks much better on the defensive front. The Hawkeyes finished No. 22 in the nation and fourth in the Big Ten last season in total defense.

The Hawkeyes’ secondary is particularly strong. Safety Jordan Lomax returns for his senior season after a 2014 campaign with 92 tackles and six pass breakups. Meanwhile, cornerbacks Desmond Kind and Greg Mabin also look to pick up where they left off last season. Sophomore Miles Taylor looks like the heir apparent to the departed John Lowdermilk.

Marshall Koehn is a solid kicker. Last season, he struggled early but really hit his groove late in the season. He made 10 of his last 11 field goals and went 12 of 16 overall with a 52-yarder at Pittsburgh.

Last season, Dillin Kidd and Connor Kornbrath struggled at punter. Their 37.83 yards a punt placed Iowa at 10th in the conference at 114th in the nation. This season, Koehn enters the mix for punter too.

Matt VandeBerg did well last year on punt returns, but Iowa did not have a strong kick returner.

Iowa has a lot of holes but still might escape with a solid season. For starters, the team has a pretty easy schedule, particularly its’ non-conference. Then in Big Ten play, it avoids both Ohio State and Michigan State.

Plus, its defense might be strong enough to carry an offense with question marks.

And that offense could very well be a good amount better than last year (when the team went 7-6). Beathard has a higher ceiling than Rudock, as does Canzeri to Weisman.

Best Case Scenario: Beathard and Canzeri perform far better than their predecessors and lead a far better offense. The defense remains a force to be reckoned with and shuts down opposing teams. Iowa steamrolls its soft non-conference schedules, beats all its mediocre Big Ten opponents and upsets one of Wisconsin or Nebraska. The Hawkeyes make one of the top Big Ten bowls.

Worst Case Scenario: Iowa’s many holes prove too large to fill and the team collapses into the crater. The team finishes below .500 and misses a bowl on its way to another disappointing season. Its fans (again, the worst) become increasingly dissatisfied and become even worse…if that’s possible.