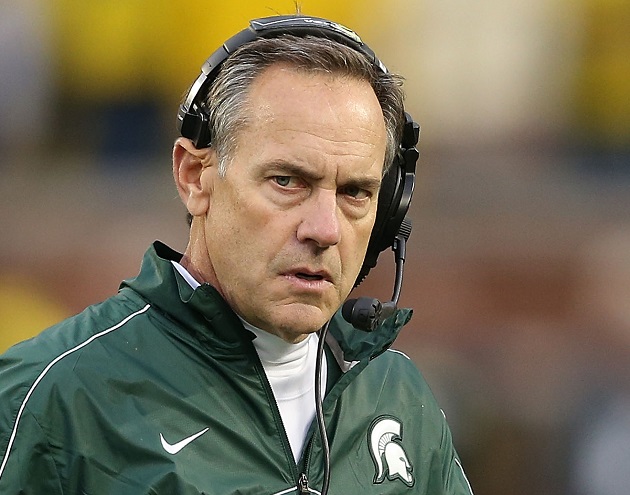 Our Big Ten preview series is back. Over the next few weeks, we’ll make our way through the Big Ten East and West from the bottom to the top. The countdown continues with the Michigan State.

Our own Ari Ross looks at a team that hopes to compete for the Big Ten Championship and a College Football Playoff berth.

Not known for their offense, the Spartans should have one of their best offenses in years. Senior quarterback Connor Cook decided to return to school, and he leads a potent offense that will put up points. Last season Cook threw for 3214 yards and 24 TDs and this year he could top those numbers. The Spartans return all but one starter along an offensive line including possible future first-round pick Jack Conklin. The offensive line paved the way for Jeremy Langford’s 1500 yards on the ground this season, but the Spartans will have to replace his production at running back. Junior Delton Williams (54 car, 316 yrds, 5 TDs) was suspended in the spring, so look for sophomore Gerald Holmes (15 car, 44 yrds), redshirt freshman Madre London and four-star recruit Larry Scott to compete for the job.

After finishing in the Top 10 in defense for the fourth consecutive year, the Spartans have a few more question marks on defense than usual. Defensive coordinator Pat Narduzzi left to become the head coach at Pittsburgh and will be replaced by co-defensive coordinators Harlon Barnett and Mike Tressel. And top cornerback Trae Waynes left for the NFL, selected by the Minnesota Vikings at No. 11 overall.

But the Spartans will have one of the most fearsome front-sevens in all of Division I. Shilique Calhoun (8 sacks, 12.5 TFL) decided to forgo the NFL Draft and will anchor an impressive front. Calhoun is joined on the line by returning starters Joel Heath  (2.5 sacks, 5 TFL) and Lawrence Thomas (3 sacks, 4.5 TFL) with sophomore Malik McDowell (1.5 sacks, 4.5 TFL) rounding out the line. Senior Ed Davis (80 Tkls, 7 sacks, 12 TFL) and junior Riley Bullough (32 Tkls, 3.5 sacks, 4 TFL) headline an experienced linebacking corps.

Michigan State looks to be in for another season competing for the Big Ten West with Ohio State. The Spartans non-conference schedule is headlined by a primetime matchup with Oregon, who they lost to in Eugene last year. But at home, the Spartans should be up to the task against the Mariota-less Ducks.

In Big Ten play, the Spartans face their in-state rival and Nebraska on the road, but neither should pose too much of a challenge for the Spartans. Michigan State’s toughest Big Ten tilt will come on the road in Columbus against the defending-national champion Buckeyes. The winner of that matchup should be playing in the Big Ten Championship.

If Mark Dantonio can get the Spartans past Oregon, Michigan State could be sitting pretty till Nov. 21 when they’ll take on the Buckeyes, whom they lost to 49-37 last years at home. If Michigan State can beat the Buckeyes in Columbus, they may be playing in the College Football Playoff.

The Spartans beat the Ducks at home and upset the Buckeyes in the Horseshoe on Nov. 21. Come Dec. 31, after winning the Big Ten Championship, the Michigan State Spartans are playing in one of the two College Football Playoff Semifinals.

A lackluster secondary dooms a once vaunted Spartan defense and Michigan State loses to Oregon, and the Buckeyes in Columbus. Losing their two biggest games, the Spartans finish 10-2 and are left watch the Buckeyes compete in the Big Ten Championship for the second consecutive year.