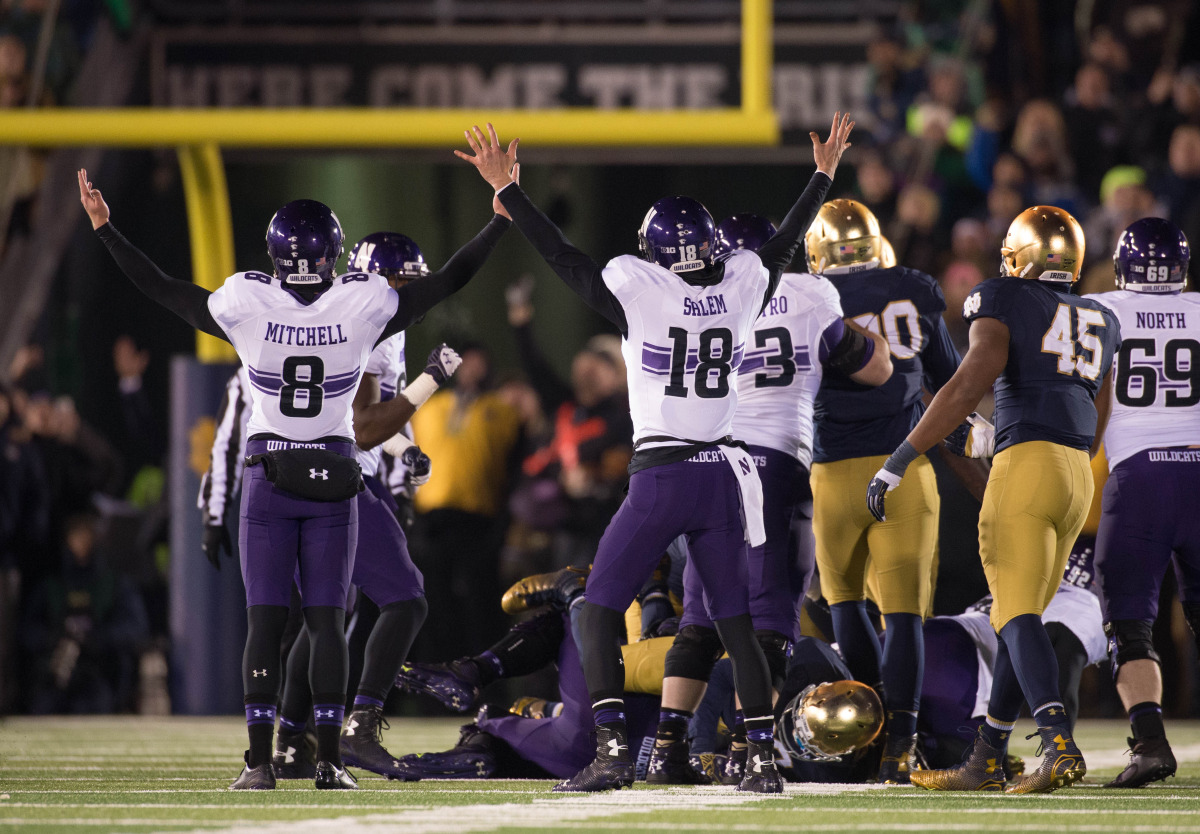 Our Austin Miller looks at the third phase, special teams, in today’s preview.

If there’s one thing that Wildcat fans will remember of the 2014 NU special teams, it was the Northwestern-Notre Dame game, where Northwestern kicker Jack Mitchell hit 4 field goals, 3 of which were from over 40 yards, including tying the game with 19 seconds to go from 45 yards and then the game winner in overtime from 41 yards. As impressive as Mitchell’s performance was though, it was an outlier in what was overall a poor season for the Northwestern special teams unit. Mitchell was 14-18 on field goals, but struggled from distance outside of the magical night in South Bend. Punting was poor at best, with Chris Gradone averaging 37.9 yards per punt. That times coverage failures meant that Northwestern finished with a dismal 124th punt efficiency ranking.  NU placed just 114th in kickoff effiency.  All things evened out, NU’s special teams F/+ ranking was 110th.  So there’s plenty of room for growth.

Gradone is gone, and Hunter Niswander, who lost an opportunity to start due to injury, is expected to be the punter. As for Mitchell, he’ll start at kicker, but if he struggles, don’t be surprised to see Niswander, or Vine sensation Mason Weissenhoffer take his place.

Northwestern’s return game features a number of athletes, headlined by Miles Shuler, and could certainly break off a few big returns during the season. If that’s the case, Northwestern should benefit from good field position. Mitchell has shown he can be an excellent kicker when he’s at his best, and with if he can make his Notre Dame new normal, Wildcat fans would be more than happy. As far as punting is concerned, with all due respect to Chris Gradone, there is nowhere to go but up for Niswander.

Mitchell could easily be the kicker we saw in the non-Notre Dame games, a kicker with limited range forcing Northwestern to go for it on difficult 4th downs or punt in situations where better teams would be kicking. While Niswander is pretty highly regarded, he’s certainly not a sure thing. Punting is still a question mark.  The return game is really the only sure thing.  With Vault and Shuler back there as impact players, and maybe even true freshman Jelani Roberts making an impact too, Northwestern is deep and explosive.

It has to be the kicker Jack Mitchell. He showed Northwestern fans just how good he can be with his terrific performance against Notre Dame, but he also showed inconsistencies that would drive Northwestern fans crazy. ‘Cats fans got a little spoiled on kickers with the terrific Jeff Budzien, but I remember the days of Stefan Demos banging extra points off the uprights and Amado Villareal struggling to make field goals. Those are days that as a Northwestern fan, I don’t want to go back to. If Mitchell can be a largely consistent kicker, it will help the Northwestern offense put valuable points on the board when needed.

Success for Northwestern’s special teams hinges on the play of Mitchell, as the return game looks to be solid, and the punting has nowhere to go but up after a disastrous performance last season.