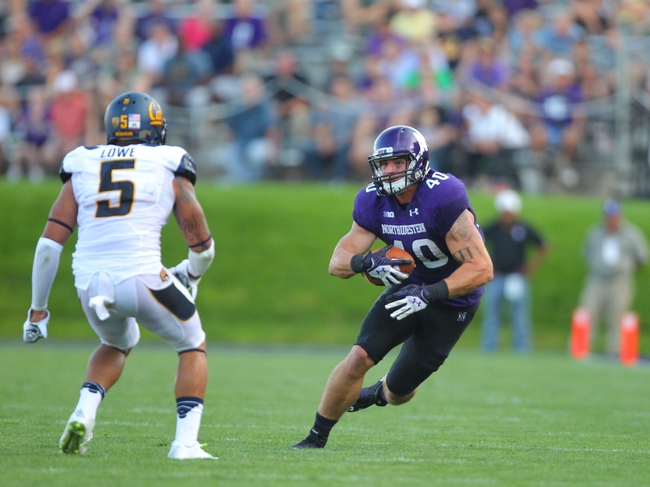 Northwestern will have a new starting quarterback in 2015, but there will be some talented yet familiar faces at superback. Our Ryan Fish breaks it down.

It’s no secret that Northwestern’s superbacks will play a big part in determining the offense’s and overall team’s success in 2015.

As the quarterback competition heats up, the superbacks will provide stability and talent in the passing game. Whether it’s Clayton Thorson, Matt Alviti or Zach Oliver under center, the superbacks should be targeted early and often this season.

The unquestioned unit leader is senior Dan Vitale, who was a big part of the Wildcat offense’s explosion during the Gator Bowl season when he was only a freshman. He’s kept up the production since then; Vitale was second on the team in receptions and yards in 2014 and tied for first in touchdowns (2). He joins the team’s “leadership council” for the third straight year, and is clearly one of coach Pat Fitzgerald’s most trusted offensive options.

It doesn’t appear that superback will be a one-man show this season, however. Watch for sophomore Garrett Dickerson to see a lot of snaps on offense, as team sources have raved about his offseason. Fitzgerald specifically mentioned Dickerson at Big Ten Media Days in Chicago when talking about young guys who will play often this season.

“I really think that Garrett Dickerson is coming on,” Fitz said. “I think he’s a guy that has big-play potential. He’s had a great offseason.”

Vitale mentioned at Media Days that we should “definitely” expect more two-superback sets on offense this season. A possible Vitale-Dickerson combination of size and speed on the field should be fun to think about for NU fans. Sophomore Jayme Taylor—who had some nice moments including a passing touchdown (!!) last season—should come in to spell those two guys and is a good third option.

There are certainly plenty of positives. Vitale provides experience along with talent. He should be a valuable and consistent check down target for an inexperienced QB.

Dickerson is young, fast and has a big frame (6-foot-3, 250 pounds). And that may just be the beginning: Vitale called Dickerson someone who is “ready to take his game to the next level.” His development could signal good things are coming for Mick McCall and the offense. If he stays healthy, it wouldn’t be surprising to see Dickerson burst onto the scene similar to how Justin Jackson did in 2014.

When you include Jayme Taylor and senior Mark Szott on the list, this unit has plenty of depth, too.

All the talk about Dickerson’s upside is great, yet he and Taylor combined for only 13 catches, 99 yards and no touchdowns last season. One or both will have to prove themselves as reliable pass-catchers before we can know either is a sure offensive threat.

Another issue was blocking: Northwestern ranked 11th in the Big Ten in sacks allowed (34) and last in the conference in sack yardage allowed (279) in 2014. Obviously, most of that onus was on NU’s inconsistent offensive line play. However, the superbacks struggled on that end as well last fall.

Plus, some of the blame for Northwestern’s well-documented lack of explosive plays in 2014 comes from the failure of plays like bubble screens, where superbacks have to get out and block down the field. I expect that to be a point of emphasis from the ‘Cats’ coaching staff this season.

Although Dickerson is certainly a breakout candidate, I’ll go with the veteran in Vitale. His guidance and knowledge of the offense is essential for helping a new starting quarterback. He’s been a reliable and sometimes dangerous target since his freshman year, and Fitzgerald will need him to continue to be such in order for NU to overcome its offensive woes of 2014.

One area that could be key for Vitale this season is the big play. He didn’t catch a pass longer than 28 yards last season, and if you don’t include his 7-catch, 113-yard performance against Penn State, he only caught three passes longer than 20 yards. More consistent explosive plays from Vitale (or from anybody, for that matter) would do wonders for the boys in purple.

All in all, Northwestern’s superbacks have a good mix of depth, talent and experience, and their production (or lack thereof) could make or break the passing game in 2015.