Posted on September 1, 2015 by Michael Stern Leave a comment 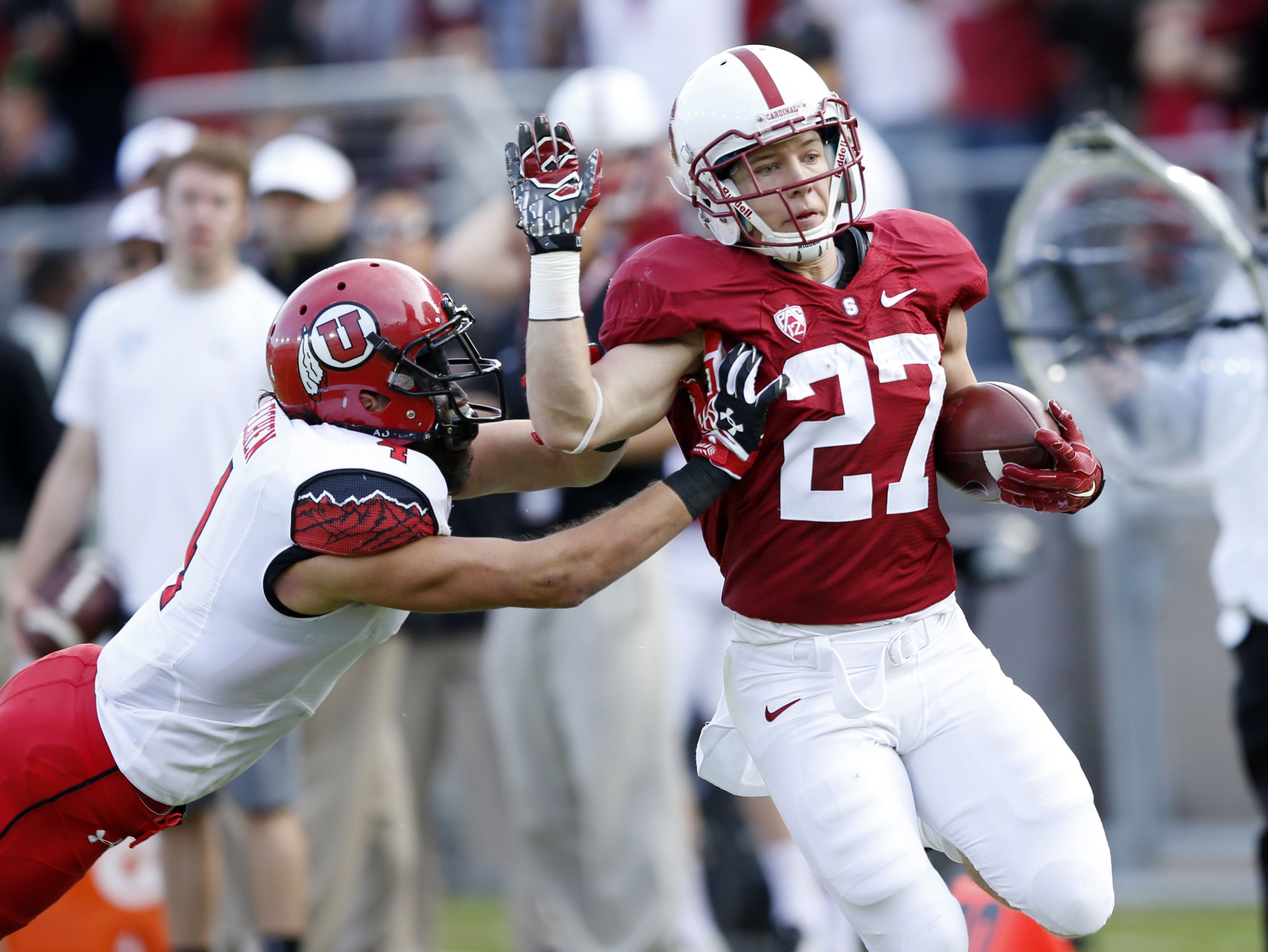 Christian McCaffery looks to be next in a long line of powerful Stanford running backs, none of whom have made big impacts in the NFL.

Welcome to six degrees! Here’s how it works…every week, I’ll start with Northwestern’s opponent and follow my stream of consciousness until I get to something interesting and rankable. Then, I’ll rank the top six of that category which somehow relates to the Wildcats’ opponent for the week.

So, without further adieu, Stanford.

When I think of Stanford, the first thing I think of is running backs. Big, bruising, bell cow backs who carry the ball 35-40 times a game all season long. First it was Toby Gerhart, then Stepfan Taylor, then Tyler Gaffney. The Cardinal struggled last season when neither Remound Wright nor Barry Sanders, Jr. emerged as a suitable option, but Christian McCaffery is expected to carry the load in 2015.

Interestingly, none of Stanford’s last three power backs have found a home in the NFL. Gerhart played decently behind Adrian Peterson in Minnesota before moving to Jacksonville and quickly losing the top job. Taylor has been in Arizona for two seasons and got four starts last year, but did not impress. Gaffney spent last year on injured reserve in Carolina, and he’s headed to the Patriots’ IR this year.

If Stanford’s running backs aren’t making waves in the NFL, then which schools’ ball-carriers have the most success at the next level? Who really is “Running Back U”? I looked at all the NFL 1,000 yard-rushers since 2000 to find out which schools have produced the best running backs in the 21st century. Here are the top six:

The Tigers are one of four schools with four 1,000-yard NFL backs since 2000, but they come in sixth overall as the runners only have one Pro Bowl between them. Joseph Addai won a Super Bowl as a rookie and made the Pro Bowl the next year, but he retired after the 2011 season. Stevan Ridley topped 1,000 as New England’s feature back in 2012, and he heads to the Jets a Super Bowl champion. Jeremy Hill started eight games for Cincinnati as a rookie, and Domanick Williams was the first running back with a thousand-yard season in Houston Texans history. Coaches Saban and Miles have produced a solid group of NFL backs, but not many big names. 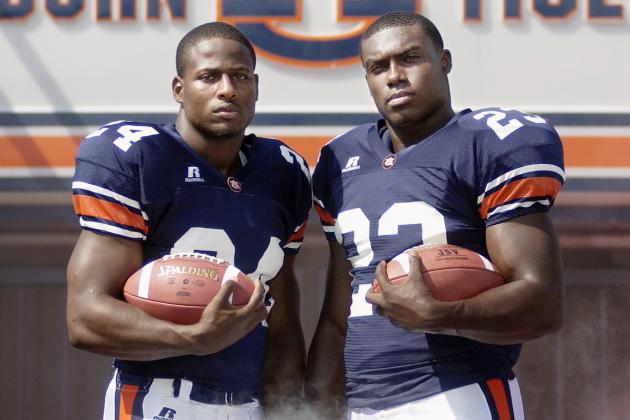 Ronnie Brown, Cadillac Williams, and Auburn check in at number five on our list of the top running back-producing universities.

After Ronnie Brown and Cadillac Williams led the Tigers to a perfect season, the duo headed to the NFL to help Auburn finish fifth on our list. Brown became NFL famous as Miami’s wildcat quarterback, reaching the Pro Bowl in 2008. After sub-par seasons in Philadelphia and San Diego, Brown is still a free agent. Williams, his backfield partner on the Plains, broke the 1,000-yard barrier in his rookie season in Tampa Bay and never reached the mark again. Rudi Johnson made the Pro Bowl for Cincinnati in 2004 while everyone was watching Chad Johnson and TJ Houshmanzadeh, and 230-pound tank Stephen Davis ran over defenders for the Redskins before reaching the Super Bowl with the Panthers.

The Longhorns produced four really solid NFL backs, and I was a little surprised they weren’t higher on this list. Jamaal Charles is UT’s present-day superstar, a first-team all-Pro for the Chiefs in 2010 and 2013. In fact, some people say Charles is the best Kansas City running back since fellow Longhorn Priest Holmes, who won a Super Bowl in Baltimore and had the single-season touchdown record until LaDanian Tomlinson broke it. Cedric Benson had three straight 1,000-yard seasons in Cincinnati from 2009-2011, and Ricky Williams led the league in rushing for the Dolphins in 2002 before becoming the subject of a scintillating ESPN “30 for 30.” 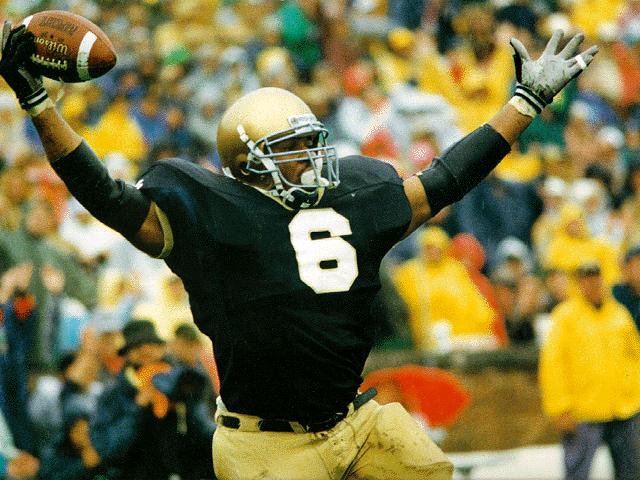 It can’t have been fun to tackle Jerome Bettis when he was playing for Notre Dame. The Bus leads the Irish to number three on our list.

If there’s a cheat code to these rankings, it’s having a Hall of Famer call your university home. Jerome Bettis single-handedly vaulted the Irish past the Longhorns, Tigers, and Tigers, reaching six Pro Bowls for the Rams and Steelers and winning the Super Bowl in his last season with Pittsburgh. Ricky Watters was a solid back throughout the 1990s, reaching the Pro Bowl in his first five seasons and hoisting a Lombardi Trophy with San Francisco. His 2000 season with Seattle (1,242 yards) renders him eligible for this list. Oft-forgotten seasons from Julius Jones (Dallas, 2006) and Ryan Grant (Green Bay, 2008-2009) lift the Irish over the top, but it’s “the Bus” doing all the legwork for Notre Dame.

The Vols are one of two schools who have produced five 1,000-yard NFL backs this century. Houston’s Arian Foster is the big name, but Jamal Lewis ran for 2,000 yards in 2003 and won a Super Bowl in Baltimore before posting two solid seasons in Cleveland. Travis Henry made the Pro Bowl for Buffalo in his second season, and he had a solid 2006 season for the Titans before giving way to LenDale White and Chris Johnson. James Stewart had a couple 1,000-yard seasons nobody remembers for Detroit in 2000 and 2002, and Charlie Garner reached the Pro Bowl for San Francisco in 2000 before crossing the bay and leading Oakland in rushing the year Tampa Bay dropped 48 on the Raiders in the Super Bowl. These guys may not be memorable, but they were good. 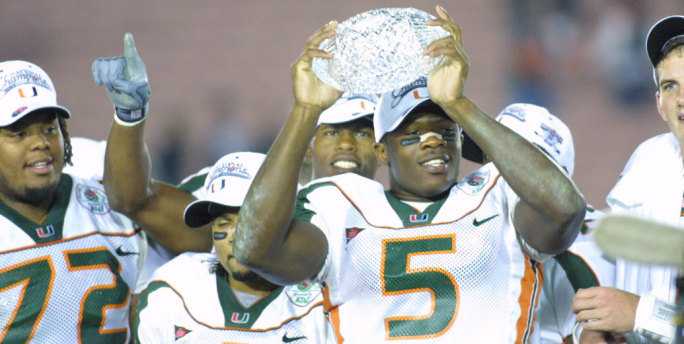 Willis McGahee, Clinton Portis, Frank Gore and the Hurricanes took home the BCS Championship and the slightly less prestigious title of WNUR’s “Running Back U.”

Want more evidence Miami ruled college football in the early 2000s? Take a look at this lineup of ball-carriers. Edgerrin James led the NFL in rushing during his first two seasons in Indianapolis, and also tallied two strong seasons with Arizona. Clinton Portis was solid in Denver, then got traded to Washington for Champ Bailey and remained solid. Willis McGahee ran for 1,000 yards for three different teams (Buffalo, Baltimore, and Denver), and Frank Gore is San Francisco’s all-time leading rusher. As if those four aren’t enough, Lamar Miller posted a breakout 2014 for the hometown Dolphins. There’s no question Miami is “running back U,” but I’m wondering how Portis, McGahee, and Gore shared carries on the 2001 Hurricanes.