Posted on September 8, 2015 by Michael Stern Leave a comment

Jimmy Garoppolo went from EIU to New England. Who could be the next quarterback to make the jump from the FCS to the pros?

The Panthers hail from Charleston, Illinois (a town closer to Indianapolis than Chicago) and play in the FCS Ohio Valley Conference. EIU lost to Western Illinois last week, 33-5, so the ‘Cats have a strong chance of beating the Panthers and improving to 2-0 on Saturday.

Although their current team may not pose a threat to Northwestern, EIU Panthers past have had a huge impact on the NFL. Longtime Raiders/Broncos/Redskins head coach Mike Shanahan played quarterback for the EIU, as did current Saints boss Sean Payton. Before throwing the most touchdown passes in Cowboy history, Tony Romo was a three-time OVC player of the year at EIU, and Jimmy Garoppolo won conference player of the year as a Panther in 2013 before holding his pro day at Northwestern and becoming Tom Brady’s heir apparent in New England.

So, who’s next? Are there any quarterbacks currently playing FCS-level ball who could possibly make the jump to NFL starter? Here are six to keep an eye on. 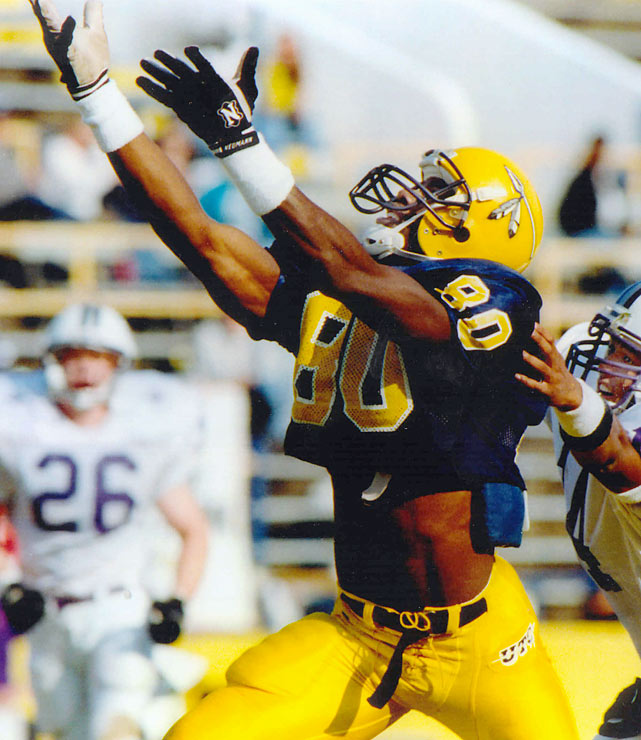 Terell Owens became an NFL superstar after playing his college ball in Chattanooga. Could current Moc quarterback Jacob Huesman be next?

6. Jacob Huesman, Tennessee-Chattanooga. A two-time Southern Conference offensive player of the year who plays for his father, Russ, Huesman accounted for 3,740 total yards and 37 total touchdowns last season as a junior. He led the 2014 Mocs to a SoCon championship, the FCS quarterfinals, and a near upset of Central Michigan (UT-C led 16-0 in the second quarter before losing 20-16). Huesman, who gets another chance on the big stage later this season when the Mocs face Florida State, wouldn’t be the first Chattanooga grad to make it big in the NFL. Perhaps you’ve heard of Terrell Owens?

5. Tre Roberson, Illinois State. If Roberson sounds familiar, that’s because he started under center for Indiana as a freshman before injuries and inconsistencies led him to Normal. Another dual threat, Roberson accounted for 4,250 total yards and 41 total touchdowns in his first season leading the Redbirds, which was enough for him to collect conference newcomer of the year honors. Roberson also delivered a magical post-season run, as fifth-seed Illinois State beat Eastern Washington (led by current Oregon quarterback Vernon Adams) and top-seeded New Hampshire to reach the FCS title game before falling by two points to North Dakota State. Roberson had a tough day in the Redbirds’ season-opening loss at Iowa, but keep an eye on him this season, as he might have another Cinderella run up his sleeve. 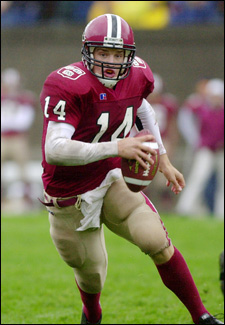 Harvard’s Ryan Fitzpatrick jumped from the Ivy League to the NFL. Could Yale’s Morgan Roberts follow in his footsteps?

4. Morgan Roberts, Yale. Roberts transferred from Clemson to New Haven and threw for 3,230 yards and 22 touchdowns in his first season as a starter. Roberts led the Bulldogs past FBS Army in the second game of the season, accounting for 357 yards and two touchdowns. He also played well in the Harvard-Yale game, throwing for 305 yards as the Bulldogs lost by seven. This year, all the pressure is on Roberts after running back Tyler Varga’s graduation, and with NC State transfer Bo Hines at receiver, Roberts should be able to produce and give himself a chance to follow in Ryan Fitzpatrick’s footsteps.

3. Alex Ross, Coastal Carolina. Ross and the Chanticleers (yes, that’s really their nickname) burst onto the FCS scene in 2014, earning the seventh seed and giving eventual champ North Dakota State a run for their money in the quarterfinals. Ross was named Big South offensive player of the year, and was the quarterback on the all-conference first team for the second straight year, accounting for 4,080 total yards and 20 passing touchdowns. CCU is not a slouch of an FCS program either, as the Chanticleers have produced solid NFL players (Jerome Simpson, Mike Tolbert, and Tyler Thigpen) and recently announced an upcoming move to the FBS and the Sun Belt Conference. If Ross delivers another strong season, he could find himself on NFL scouts’ radar.

2. Carson Wentz, North Dakota State. In his first year as the starter in Fargo, all Wentz did was account for 3,753 total yards, score 32 total touchdowns, and win the FCS title game MVP in leading the Bison to a fourth straight championship. The Bison suffered an upset loss at Montana to open the season, but Wentz wasn’t to blame, as the senior accounted for 268 yards, and four touchdowns. Wentz already has an influential fan in ESPN NFL Draft guru Mel Kiper, Jr., who ranked Wentz third on his latest list of quarterback prospects for the 2016 draft, just behind Connor Cook (Michigan State) and Cody Kessler (USC) but just ahead of Trevone Boykin (TCU) and Dak Prescott (Mississippi State). Wentz is keeping pretty good company at the moment, and if he leads the Bison to a fifth straight FCS title he’s sure to hear his name called at the 2016 draft. 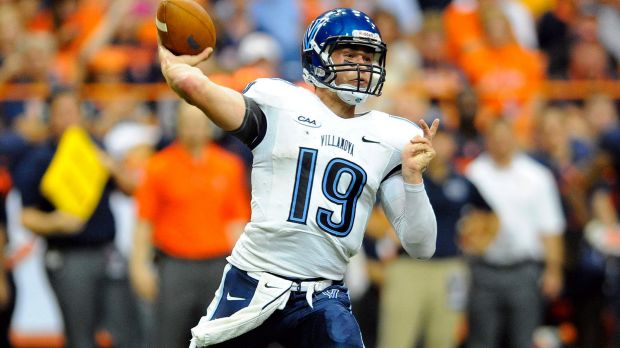 Villanova’s John Robertson won the Walter Payton Award (FCS Heisman) as a junior. Could he get a chance in the NFL?