Posted on September 14, 2015 by Ryan Fish Leave a comment 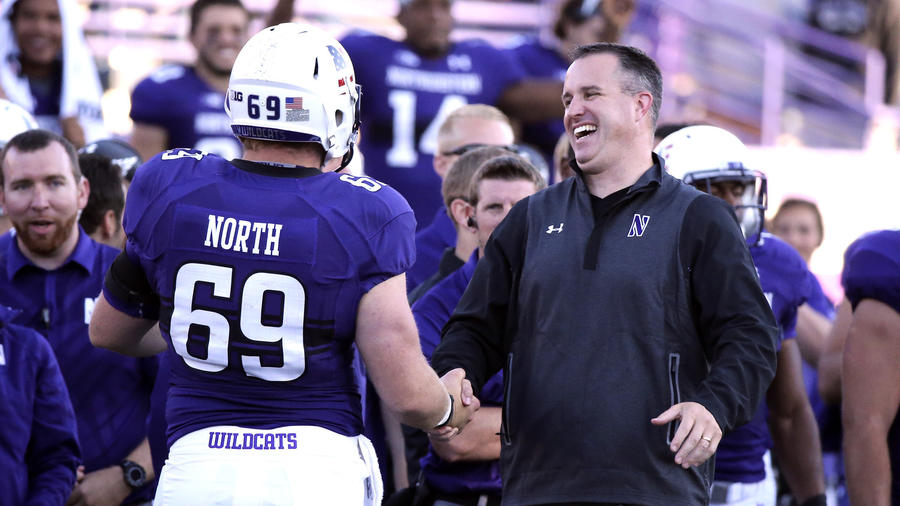 There was no hangover on the field for Northwestern after an impressive win over Stanford in the season opener. Northwestern dominated offensively and defensively on Saturday on the way to beating Eastern Illinois 41-0, moving to 2-0 on the year. The ‘Cats moved into the national spotlight, ranked 24th in the USA Today Coaches’ Poll and 23rd in the AP Top 25 Poll.

All in all, the game was a mixed bag for the ‘Cats. Eastern Illinois was entirely overmatched from the start, meaning that Northwestern’s statistical prowess may not hold much weight later in the season when the Wildcats play much tougher opponents. At the same time, it was highly encouraging to see Northwestern dominate a game to this level after struggling somewhat against FCS opponents in previous years. How much did they dominate, you ask? Here are some numbers that define the dismantling of Eastern Illinois on Saturday:

The Wildcats’ rushing game was relentless on Saturday, rushing for 344 yards and finding holes in the Panthers’ defense early and often. That rushing attack was balanced, too: four Northwestern players rushed for over 50 yards while seven players rushed for 20 yards or more. Those figures don’t include quarterback Clayton Thorson, who ran for a touchdown on a scramble just before halftime.

Justin Jackson again got the majority of the carries, rushing 22 times for 78 yards and his first touchdown of the season. Backup running back Warren Long looked the most impressive, gaining 72 yards on only 12 carries and earning a rushing touchdown of his own. Corey Acker and Auston Anderson also found some daylight as well, gaining 57 and 56 yards respectively in limited playing time. Anderson lost a fumble late in the game, however, as the only blemish the unit had all afternoon.

Clayton Thorson hasn’t been perfect this season, but part of Northwestern’s success is due to his ability to take care of the ball. Thorson didn’t turn the ball over on Saturday and has yet to do so this season; while he was fortunate not to be intercepted on multiple bad throws against the Cardinal, he looked cleaner and more composed against a weaker opponent this week.

While that isn’t overly impressive, Thorson didn’t disappoint against an FCS opponent and was able to manage the game effectively. He even picked up the first passing touchdown of his career, hitting Austin Carr for a 44-yard score. He doesn’t need to be flashy as a redshirt quarterback; if he can manage the game in a similar fashion going forward, the Wildcats will be in good shape on offense.

Northwestern’s drives that ended in touchdowns on Saturday went no shorter than six plays. The team had its fair share of big plays against the Panthers’ defense, but also showed that it could maintain drives and convert on third down early and often.  Surprisingly enough, the Wildcats struggled to do exactly that in underwhelming performances against FCS opponents in recent years. Northwestern also converted field goals on drives of 14 and nine plays each, gaining 28 first downs on the afternoon and going 10-17 on third down. Doing so gave the ‘Cats a definitive edge in time of possession, keeping the defense off the field and rested. That’s certainly a trend that Pat Fitzgerald hopes will continue moving forward.

As impressive as the offense looked this weekend, it was Northwestern’s defense that ultimately stole the show (and will most likely carry this team in 2015). The defense has yet to allow a touchdown this season; it’s the first time the Wildcats have kept two consecutive opponents out of the end zone since 1958 (57 years ago). Additionally, it’s the first time the Wildcats shut out an opponent since 2007, when Northwestern beat similarly-named Northeastern 27-0.

This defense is fast, smart, deep and athletic. And it’s shown so far this season in shutting down an experienced Kevin Hogan at quarterback in Week 1 and throttling Eastern Illinois’ entire offense in Week 2. Historical markers like this don’t happen that often, and it certainly doesn’t appear that this defense’s success is a fluke.

If Northwestern’s running game was impressive, then Eastern Illinois’ was exactly the opposite. The Panthers ran for 2.4 yards per carry and only 70 yards overall. Northwestern’s front line racked up eight tackles for loss, limiting the running game all afternoon long following another impressive performance against Stanford. The pass defense was effective as well, sacking EIU quarterback Jalen Whitlow twice and allowing only 3.0 yards per pass to the Panthers.

Arguably even more impressive, the defense didn’t allow a single third-down conversion from EIU (in large part due to the small yards-per-play average). The Panthers gained only eight first downs all afternoon, and never reached the Wildcats’ red zone. To say EIU’s offense was “ineffective” would be a major understatement.

Northwestern cornerback Matthew Harris was undoubtedly the defensive MVP on Saturday, recording two interceptions and accounting for 94 yards in return yardage. Oh yeah, and he had 71-yard interception return for a touchdown to provide a major exclamation point for the ‘Cats. Not a shabby afternoon for the junior.

Harris, along with fellow cornerback Nick VanHoose and safeties Traveon Henry and Godwin Igwebuike, form a talented secondary that calls itself the “Sky Team.” That name fits well enough, as opposing quarterbacks look to have a rough time trying to go deep on this unit of defensive backs. If Northwestern can continue to limit big passing plays downfield (another area where they’ve struggled in recent seasons), they may become a legitimate threat to win the Big Ten West. The defense will have to continue to prove itself, and against much tougher competition, too.