Posted on September 16, 2015 by Ryan Fish Leave a comment 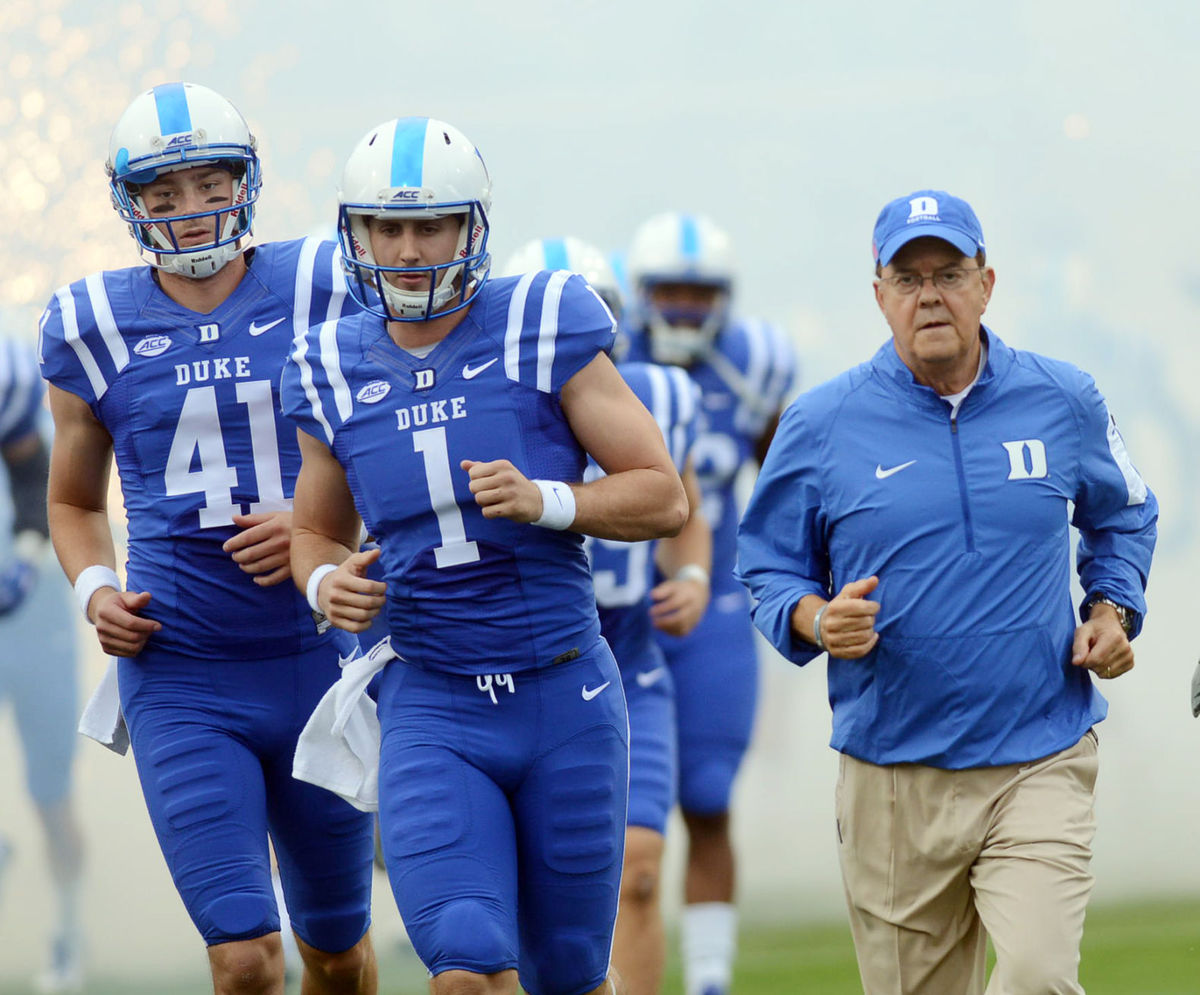 Two games into the 2015 season, the Northwestern Wildcats find themselves in exciting territory. The team is producing offensively—under a redshirt freshman quarterback, no less—and the defense has been dominant. Oh, and Northwestern is also ranked 23rd in the nation in this week’s AP Poll, the first time the Wildcats have cracked the Top 25 in nearly two years.

But don’t sing the team’s praises to head coach Pat Fitzgerald. He knows there’s still a lot of ball to be played, and a “great challenge” is staring them in the face this week.

“I think we passed the first test [in avoiding a letdown against Eastern Illinois],” Fitzgerald said Monday at his weekly press conference. “Now let’s see how we do with the second one.”

Northwestern will head east to take on Duke in its first road game (and only non-conference road game) of the season. Although No. 23 Northwestern is visiting the unranked Blue Devils, the ‘Cats are actually slight underdogs heading into Saturday. That being said, the two teams are similar in terms of their fast, dynamic athletes on the field and their paths to begin this season, which means its likely that we see a close game on Saturday.

Both teams are undefeated, and although Stanford provided the ‘Cats with a tougher test than Duke has yet to face this year, both teams have played well and will look to notch a quality win early on in the season.

“They’ve got a very good football team,” Fitzgerald said of the Blue Devils. “It’s going to be a huge test for us, no doubt about it.”

Dual-threat junior quarterback Thomas Sirk, who has already impressed this season with six total touchdowns and no interceptions (albeit against mediocre competition), leads the Duke offense. Sirk is a first-year starter but has had plenty of previous playing time and experience in the system; his eight rushing touchdowns as a backup last season led the team in that category.

Sirk’s success on the field should come as no surprise, as Duke head coach David Cutcliffe has a history of tutoring talented quarterbacks over the years. The combination of his speed, size and accuracy could make for a nightmarish day for Northwestern if the ‘Cats’ are unable to contain him. That being said, Sirk has yet to face a defense as intimidating and talented as this Wildcats unit.

“This year, the game has started to slow down for me a lot,” said Wildcats linebacker Anthony Walker at Monday’s press conference. “We’re doing a great job as a whole, complete defense. Playing fast, everybody running to the ball… that’s the focus right now.”

Walker admitted that Sirk’s athleticism will pose a great challenge, but the defense has reason to be confident. The unit smothered Stanford QB Kevin Hogan in the season opener, then completely shut down EIU’s offense this past weekend.

Then again, Duke’s strong defense also cannot be overlooked. The Blue Devils run a somewhat unusual 4-2-5 formation that adds an extra defender into the team’s secondary. That caters heavily to Duke’s overall strength on the defensive side of the ball: speed and athleticism.

“They are built for speed,” Fitzgerald said of Duke’s defense. “You get more athletes on the field, you get coverage multiplicity, you can do a lot of things when you got that extra guy out there [in the secondary].

That quickness on defense could pose serious problems for Northwestern’s offense.

Clayton Thorson’s solid start at quarterback this season is largely due to his ability to hang onto the ball, as he is yet to commit a turnover this year. He still has made some questionable decisions when throwing the ball this season, however, and Duke’s playmakers will most likely take advantage if Thorson does so again this week.

Keep an eye on all of Duke’s safeties, especially junior DeVon Edwards and senior team captain Jeremy Cash. Edwards not only makes plays on defense, but also has speed in the return game and is Duke’s primary kickoff returner so far this season. Cash is a big-time player and will most likely be headed to the NFL sometime soon. The Thorpe Award candidate and All-American safety earned high praise from Fitzgerald, who called him an “absolutely terrific football player.”

All in all, this game should be very telling of where Northwestern is headed as a team in 2015. The ‘Cats’ win over Stanford was certainly impressive, but what if the Cardinal simply came into Evanston as an overrated team? The dominating win over EIU made some fans forget some underwhelming performances against FCS teams in previous years, but can that level of play possibly continue against tougher competition?

Northwestern could easily flounder under the pressure on the road against excellent talent. Or they could do what they’ve done for the past two weeks: smack the other team in the mouth, silence the critics and come away with a victory. In the wide-open Big Ten West, are the Wildcats a serious contender or just another pretender?