Posted on September 20, 2015 by WNUR Sports Leave a comment 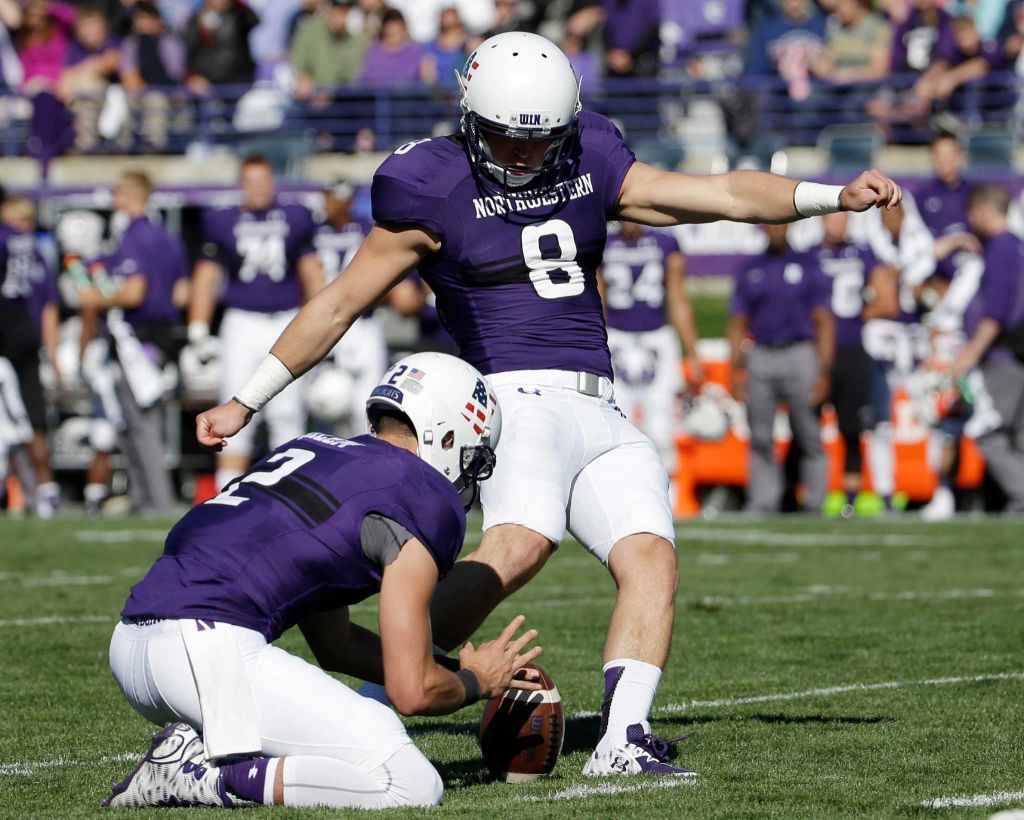 I thought of not writing this article solely because of jinxing it. I know I will be labeled a homer for what I am about to say.  Comments and retweets will be filled with people calling this the hottest of takes. But I genuinely believe this:

You might ask if we were watching the same game – a 19-10 defensive matchup where the offense looked shaky at best and stagnant at worst. Thorson put up a stat line no one would associate with conference winners – 9 of 23 for 70 yards, 2 INTs and a 7.9 QBR. Warren Long basically had to win the game himself with an impressive TD run and special teams fumble recovery that sealed the game for the ‘Cats. Even looking at all that, I came away impressed with this win – mostly with how incredible this defense is. Anthony Walker was everywhere on the field, notching a career high 19 tackles. Dean Lowry routinely got in Sirk’s face, getting an INT, an oh-so-close scoop and score, and tons of pressure along with the defensive line.

But you know the defense is good. No one’s debating that fact. The only let up a touchdown because they were given bad field position off an INT. So how can this offense win games when they barely clutched out this one?

Looking at the stat line, every person on the offense not named Justin Jackson or Warren Long played badly. Watching the game, I came away with a different thought – all of the problems on offense are fixable. Thorson has shown he has the skills – he can make some nice throws and agile plays on his legs, but sometimes gets flummoxed by pressure and makes some questionable decisions in the option and in his reads. But these are all fixable mistakes, mostly coming from lack of experience and confidence. As the season progresses and Clayton gets more practice and more game time, we’ll see him make better decisions and improve as a player. There were also some mistakes from the receiving corps, with some notable drops and what seemed like miscommunication between Thorson and a few receivers. Again, through some more practice and chemistry building, the corps will play tighter and help Thorson. Even if these issues aren’t completely fixed, Justin Jackson and good field position/turnovers from the defense means the rest of the offense just needs to play passably.

Another notch for NU’s belt is Stanford’s win against USC. We’ve all been wondering if Stanford was just a bad team this year, or Northwestern actually played well, and Saturday night was a decisive tally for Northwestern playing well. Even if USC was overrated at 6, Stanford cemented themselves as a Pac 12 contender, and a win for NU against a team like that only shows how good this team can be.

However, the best thing going for Northwestern is the Big Ten West. The division is wide open. With Nebraska looking shaky at 1-2 and Wisconsin taking the loss against Alabama, Northwestern is in the lead. Their schedule coming up is fairly easy – Ball State is Ball State, Purdue and Illinois look extremely vulnerable, Minnesota could barely beat Kent State, and Penn State doesn’t have an O line. Obviously, anything can happen in a game, and teams ebb and flow throughout the season, but those seem like games Northwestern should be able to win. That leaves Iowa, Michigan, Nebraska, and Wisconsin. Since Nebraska has to play Michigan State, Michigan is in the Big Ten East and Iowa is struggling to beat mediocre teams, that leaves the Wisconsin contest as NU’s biggest game of the year. And I think the ‘Cats match up well with the Badgers. Joel Stave is a competent quarterback (as I wrote about in the preseason), but Northwestern should be able to handle him, especially because he doesn’t have the mobility that tends to hound the ‘Cats defense. Corey Clement has been nursing a groin injury, and will most likely be back after nonconference, but what we did see from him doesn’t put him much better than the Stanford backfield, who Northwestern contained for 85 yards. While Wisconsin’s secondary is excellent, their defense struggles against the run, which means it might be on Justin Jackson to carry the team out of Camp Randall with a victory.

This could be a Northwestern team we talk about for decades to come. We might be seeing the start of an even greater football team, with Thorson, Walker, and Jackson looking like some of the best talent at Northwestern in recent years. NU is poised to make an amazing run this year, and I honestly believe they have a shot to play in Lucas Oil Stadium and get dominated by Ohio State or Michigan State. It’s always tough to look at this team with all the heartache they have caused and not see the same failures as years prior. But looking past the cracks, this team has a fighting chance, and the perfect conditions to go for it. Maybe they’ll find a way to be even more Northwestern than ever and somehow go 5-7 and miss a bowl, but right now, all I can see in this team is a Big Ten West division title.

Quickly knocks on every piece of wood in the room.