Posted on September 29, 2015 by Michael Stern Leave a comment

Josh Campion leads the Gophers up front. He’s a 307-pound redshirt senior who had a streak of 38 consecutive starts snapped when he missed the season opener against TCU. Campion looks like a full-grown man, and, well, that’s partially because he is a full-grown man. Should the Gophers reach the Big Ten title game. Campion will play that contest the night after his 25th birthday. How is a soon-to-be-25-year-old eligible to play college football? Part of the answer is military school.

After graduating from high school in the summer of 2010, Campion spent a year at Fork Union Military Academy in Fork Union, Virginia. After that year, Campion redshirted for the Gophers during the 2011 football season, so entering the 2012 campaign he had four years of eligibility left despite being two years out of high school.

Campion’s not the only college football player to take advantage of this military school situation. Without further ado, here are the six most effective users of Fork Union Military Academy in the past 20 years.

6. Osazuwamen Igbinosun, DE, Ball State. It’s not just major programs that try to take advantage of the military school loophole. Igbinosun graduated from Rahway High School in 2011 before spending the 2011-2012 school year at Fork Union. He committed to Ball State, and his first football season on campus came in 2012, and this is where Ball State messed up. Igbinosun played for the Cardinals that year, meaning he celebrated his 22nd birthday earlier this month during his senior season. Also disappointing, Igbinosun hasn’t cracked the rotation in Muncie, tallying only four tackles in the Cardinals’ first four games. A year of military school didn’t make a huge impact on Igbinosun’s college football career, but other players have taken advantage of the bonus year.

Plaxico Burress was the first star to spend a year at Fork Union before heading to college, where he starred at Michigan State for Nick Saban.

5. Plaxico Burress. Burress is to military school what Greg Oden and Kevin Durant are to the one-and-done: an innovator and trendsetter. Burress graduated from Green Run High School in 1996, but spent a post-graduate year at Fork Union before enrolling at Michigan State ahead of the 1997 season. After redshirting, Burress played two seasons in the green and white, leaving school for the draft after his redshirt sophomore season at age 22. Military school was supposed to solve some of Burress’ maturity issues, but judging by the whole shooting-himself-in-the-foot incident, the maturity issues persisted. The icing on the cake in the Burress story: his coach at Michigan State was none other than Nick Saban. Leave it to Saban to be the first exploiter of this loophole.

4. Michael Thomas, WR, Ohio State. There’s no reason to rank Thomas ahead of Burress other than potential. Keyshawn Johnson’s nephew prepped at Taft High School in Los Angeles before spending the 2011 season at, you guessed it, Fork Union. Thomas played sparingly as a freshman in 2012, redshirted in 2013, then burst onto the scene as a 20-year-old redshirt sophomore during the Buckeyes’ 2014 title run (799 receiving yards, nine touchdowns). He’s already caught three touchdowns in 2015, and figures to be Cardale Jones’ top target for the rest of the year. Thomas took the extra year after his high school graduation, and it’s made him a bigger piece of the puzzle at OSU.

3. Christian Hackenberg, QB, Penn State. Hackenberg is an interesting guy on this list, because unlike any of the other five, he actually attended Fork Union. Like, for all of high school. Hackenberg started under center at Fork Union for three seasons, and while he threw too many interceptions his junior year (20 touchdowns to 16 interceptions), he rebounded for a solid senior season (24 scores, 9 picks), then committed to play for Bill O’Brien at Penn State. Hackenberg was dynamic as a freshman, throwing 20 touchdown to 10 interceptions, but O’Brien left to coach the Texans and Hackenberg has yet to gel with new coach James Franklin (13 touchdowns, 16 interceptions in 17 games under Franklin). Hackenberg remains a compelling pro prospect and has a chance to become a rare NFL player who actually attended Fork Union for four years.

2. Carlos Hyde, RB, Ohio State. Hyde was the first Urban Meyer Buckeye to exploit the Fork Union system. When Hyde graduated high school in 2009, he used the loophole to spend the fall of 2009 at Fork Union before enrolling in Columbus in early 2010. Hyde burst onto the scene as a 21-year-old junior, rushing for 970 yards and 16 touchdowns. He almost doubled his production in 2013, running for 1,521 yards and 15 scores before being drafted by the 49ers, where he is now the featured back. Coincidentally, Ohio State’s offensive coordinator at the time of Hyde’s recruitment was a fellow named Jim Bollman, who happened to coach offensive linemen for Nick Saban at Michigan State during Burress’ recruitment. 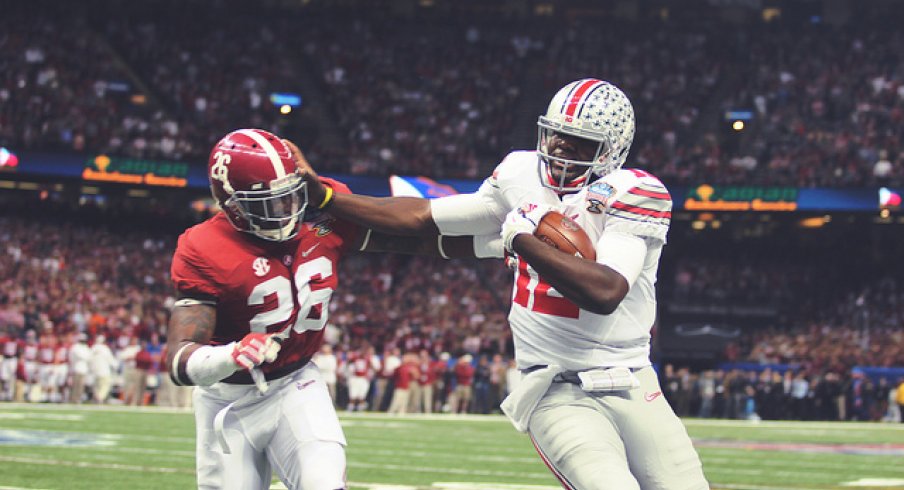 Cardale Jones pushed around Landon Collins in the Sugar Bowl. Jones is 23 and playing as a redshirt junior, Collins is 21 and a rookie for the New York Giants.

1. Cardale Jones, QB, Ohio State. Nobody has used the Fork Union loophole better than Jones. After graduating from high school in the summer of 2011, Jones spent the fall of that year at Fork Union, where he roomed with future teammate Michael Thomas. Cardale enrolled in Columbus in January 2012, redshirted, tweeted that he “ain’t come to play school,” spent 2013 as one of Braxton Miller’s backups, then spent most of 2014 as J.T. Barrett’s backup before being called into his first meaningful college action as a 22-year-old redshirt sophomore in the Big Ten title game. Jones looked like a man among boys because, well, he was. Cardale led the Buckeyes to the title and enters this season as the starter. Many speculate he will declare for the draft at the end of the year rather than return to play his redshirt senior season as a 24-year-old; for comparison Michigan State’s Connor Cook is currently playing his entire redshirt senior year at age 22. Oh, and one more thing: the Buckeyes’ current offensive coordinator is Ed Warriner, whose second college coaching job was as secondary coach in East Lansing under defensive coordinator Nick Saban.