The player behind the Battle

Posted on September 29, 2015 by WNUR Sports Leave a comment 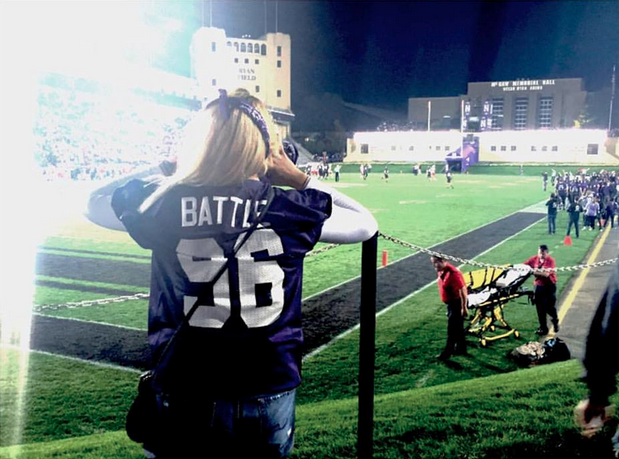 Last spring quarter, I bought a Northwestern football jersey at a NU athletic sale at SPAC. There were racks of worn jerseys, some with battle scars of grass, mud and blood still engrained on them*.  I ran across jersey  number 96 with “Battle” stitched in white on the back. I decided to invest $35 on the jersey.  The word ‘Battle’ seemed fitting for such a physical game.

When I uploaded a picture of me wearing the jersey on game day on Instagram, a friend and former Northwestern football player connected me to the original owner of the jersey, Anthony Battle.

I hadn’t processed the fact that the jersey I just wore for spirit gear was also the uniform an actual football player actually wore at the Meineke Car Care Bowl in 2011. For me, it was a costume. For Battle, it was his game day armor (even if Under Armour was still a few years away from sponsoring Northwestern jerseys).

So, meet Anthony Battle, the original owner of the jersey I bought sheerly because of the name on the back.

I graduated in 2014. I played defensive end and later in my career, tight end. I played for four years as a true freshman.

How does it make you feel to know a stranger has and wears your jersey?

It’s pretty cool. I never really thought about it. It’s a connection and bonding within the NU community. You now get to know about a player and feel connected as a fan.

Do you want the jersey back?

You paid for it. It’s yours. After every bowl game, we keep the jerseys and I guess the athletic department kept it for a few years and I just forgot.

The moments in a locker room after a victory. Fitz talking, the team all sweaty and tired but happy. The Gator Bowl was a definitely a big win for us. We’re screaming and cheering and singing songs in the locker room after a big win. Just having fun while you’re playing a game. Sometimes you take it too serious but it’s just a game. You started playing because you loved the game. After a victory it should be fun.

How many bowl games did you go to?

What are you doing now that you’ve graduated?

I got a Fulbright grant to teach English in Côte d’Ivoire. I just got back last June. Now I’m working with an education technology company in downtown.

From a physical standpoint, it is weird. You’re used to getting focused on a daily basis on a diet, body, performance and every minor detail of getting better, faster, stronger. I still carry that same mentality to my body. It shouldn’t change.  I still carry a high standard and I have to work out constantly.

Do you keep up with NU Football? Any words of advice you want to say to players or coaches or just as a fan?

Just keep training. Keep working hard. They’re going through what I’ve been through. I used to be a player and now I’m a fan. Keep building a legacy.

Thanks for letting me wear your jersey. I’ll wear it proudly and respectfully!