Why Michigan/Northwestern is the Wildcats’ Biggest Game of the Season

Posted on October 9, 2015 by WNUR Sports Leave a comment

Is this the most important game of the season for Northwestern? WNUR’s Henry DaMour thinks so, and he explains why. 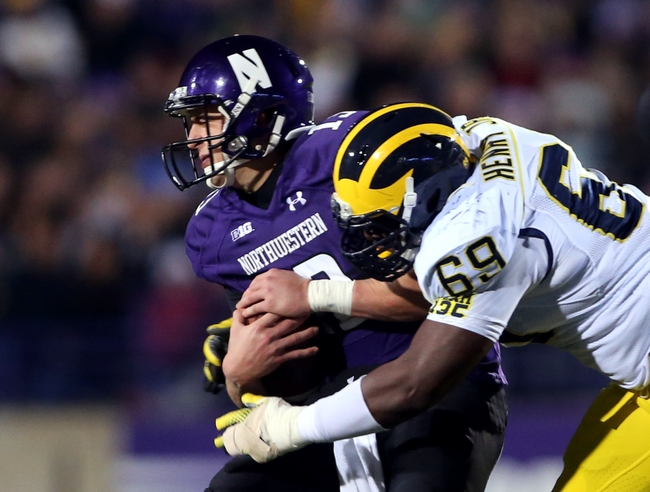 Trevor Seimian went down on the two-point conversion last year. Will the Wolverines go down to the Wildcats this year?

To say that the stakes of this Saturday’s Northwestern-Michigan football matchup are high would be an understatement. The showdown at the Big House pits two unbelievably hot teams in a game where both have a lot to prove. Northwestern fans are all too familiar with the uneasy feeling that follows any hot start to the season given the program’s performance historically, but Michigan fans hang their hats on their tradition. Despite being the winningest college football program ever, they haven’t felt that way in Ann Abor in recent years as the program has seen some less-than-inspiring coaching staffs come and go. Now they hope that the return of the prodigal Harbaugh can rekindle the maize and blue flame that burns inside the heart of every Wolverine. But before we get into how this particular season has set the stage for this Saturday, let’s get some historical context.

Since 1997, Northwestern football has amassed an extraordinarily mediocre 110-115 record. However, no season is more ingrained in Wildcat fans’ recent memories than the collapse of 2013. An explosive offense dominated the first four games, and the next thing they knew, the Wildcats were ranked #16 and sitting pretty at 4-0. ESPN’s College GameDay came to Evanston for the game against #4 Ohio State, and the hype was palpable. A fantastic game broke out, but Northwestern lost a heartbreaker against the Buckeyes. After dropping three spots in the rankings, the Wildcats wouldn’t see a number next to their name again until 2015. NU took the nosedive of the decade; one that involved an ugly loss to Wisconsin, a triple-overtime loss to Michigan, and only one more win, coming in the last game of the season.

There’s a reason this might sound oddly familiar. The Wildcats are off to a similarly scorching start this year. The only difference this year is that Northwestern’s 5-0 record comes with two SAT cup wins against Stanford at home to open the season, and against Duke on the road in Week 3. As the season has gone on, those wins and those teams are looking better and better. The defense is making national headlines, and for the first time in my memory, Northwestern was predicted by one writer to finish ranked #2 in the nation and a Big Ten champion. The bar is high this year, and while this team and its fan base are certainly standing taller than in past years, it’s still tough to emotionally invest too much in this team. It’s simply too tough to shake the 2013 season-induced PTSD. This year’s team owes it to the program and to the fans to flex its muscles this year. The streaky seasons are getting old, and if the Wildcats and their defense are for real, they can prove it is this Saturday in Ann Arbor against a surging Michigan team.

But if there’s one thing that Michigan seldom ever does at the Big House, it’s lose. That’s why Michigan actually opened as a 12-point favorite despite being ranked five spots below Northwestern. Michigan was a below-average football team for a stretch longer than a few years; a fact that is, historically speaking, appalling. The team has only once lost more than 8 of 12 games in a season (9) in its 129-year history, and that was in 2008, the start of a seven-year stretch of mediocrity under Rich Rodriguez and Brady Hoke. The fans are upset, and itching for the Wolverines to reassert themselves as a football powerhouse. For Michigan, this game is about returning the program to its pre-2008 glory, and this is the year that the Michigan Harbaughs believe they’ve been waiting for.

Even Harbaugh himself now has something to prove as a coach. While at Stanford in 2007, he criticized Michigan’s lower standards for student-athletes. Now that he’s at Michigan, he’s promised to raise the very standards he insulted a few years ago. Those words left a bad taste in many a Michigander’s mouth, but he could take the opportunity to prove himself with a victory against another Stanford-esque university in Northwestern. Many do expect Michigan football to return to its characteristic dominance under Harbaugh, but the Northwestern team he’s going up against Saturday has just as much to prove, and arguably, a little less to lose.

It’s amazing what a few years can do. An anonymous Wildcat fan recalled the 2013 meeting between these two teams. “It was the ugliest football I’ve ever seen played. It was like watching two teams trying not to lose.” 2014 didn’t make anyone jump out of their seats either. The Wolverines took that game by an eyelid-dragging score of 10-9. This year, however, both teams look pretty unstoppable, especially Michigan. After a close road loss to now-fifth-ranked Utah to open the year, Michigan has outscored its opponents 119-0 in their last 15 quarters. Northwestern’s highly-touted defense has to feel pressure to keep up with the shutout football Michigan’s own defense has been playing. Both teams are still walking with a pebble in their shoes, seeking validation this Saturday. Northwestern’s defensive performance during this game will go a long way in cementing attitudes about the legitimacy of Wildcat football this year. Meanwhile, this is Jim Harbaugh’s chance, against Michigan’s first real opponent (besides Utah) of the season, to prove that he really is capable of leading this team.

This crucial mid-season game’s implications reach from this year’s final standings, to the cores and histories of the programs represented, and to the hearts of the teams’ fan bases. Each one wants to, nay, needs to believe that this year, finally, is the year. No two teams have more to gain or lose this Saturday. The glory days are in sight once more, and this Saturday will decide which team could keep them on the horizon, and which team takes a giant stride toward establishing their reign for the years to come.