Time to panic? Not so fast 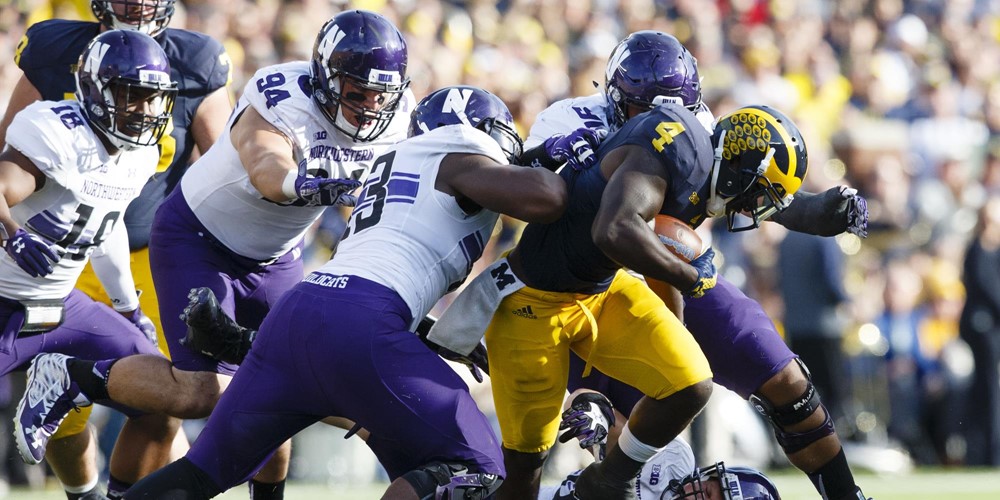 While the Wildcats got demolished by the Wolverines Saturday, it isn’t a reason to panic. Photo Credit: NUSports.com

In demoralizing fashion the Northwestern Wildcats lost to the Michigan Wolverines 38-0 at Michigan Stadium on Sunday. It wasn’t pretty. Michigan led quite literally the whole game after they took the opening kick back for six.

By the end of the first quarter, Northwestern was down three scores, and the game looked like it was already over. Michigan dominated Northwestern’s defense, while their offense couldn’t get much done either.

Michigan held Northwestern to just 168 yards of offense while gaining 380 yards themselves. Against the second-best third down defense in the nation, Michigan went 7 of 14 on third downs and averaged 5.51 yards per play.  The Wildcats averaged just 2.21.

Michigan dominated the Wildcats in all three phases of the game and it wasn’t even close. But as panic set into the Northwestern section, I wasn’t panicking.

Yes Northwestern was beaten and beaten badly, but Michigan is probably a Top 10 team. Michigan is playing the best football right now of anyone. Ohio State has the most talent, perhaps, but Michigan has put up three-straight shutouts, and hung with a very good Utah team in Jim Harbaugh’s first game.  They’re red hot.

Michigan might very well be the best team in the Big Ten when all is said and done, a team that’s a tier above the Wildcats. Their lineman are 20-30 pounds heavier than the ‘Cats.

Playing on the road against Michigan is the toughest game on the Wildcats’ schedule by a healthy margin. At home vs. Iowa or even on the road at Wisconsin or Nebraska pales in comparison to playing in the Big House, especially the way the Badgers and Cornhuskers are playing.

Losing 38-0, while rough, isn’t a reason for an all-out panic. Northwestern in with a shout of going to the Big Ten Championship game. The Wildcats need to win against Iowa next Saturday, but their schedule from here on out doesn’t have any Michigan-caliber teams.

Every single game on Northwestern’s schedule is winnable, and a loss to a very good Michigan team, one that will challenge Ohio State for the Big Ten East title come November, isn’t an awful loss.

Even with how bad they played, Clayton Thorson still looked poised in his first Big Ten road game, with his one interception coming on a fluke drop, and the first string defense really only gave up 17 points, with two touchdowns coming via Michigan’s defense and special teams.

It is still completely realistic to think Northwestern could still finish 9-3, 10-2 or even 11-1. If Northwestern wins next week, we’ll all forget about Ann Arbor.

One horrible loss isn’t going to send the Wildcats into a tailspin like it did a few years ago. There’s something different about this team. They know they can’t let that happen.

Gibson: “What happened on Saturday, we’re not gonna let it happen again.”

5-1 ain’t too shabby. Like most, I predicted the Wildcats would get 5 wins the ENTIRE SEASON at the beginning of the year. They have five wins with six more to play, including two against Purdue and Illinois.

So there’s no need to panic. To quote ESPN College GameDay analyst Lee Corso, “not so fast, my friend.” The Wildcats will be just fine.