Michigan 38, Northwestern 0: “Everything Still in Sight” for ‘Cats

Posted on October 12, 2015 by WNUR Sports Leave a comment

It’s hard to search for silver linings in the Wildcats’ 38-0 drubbing at the hands of the Michigan Blue, but captain Dan Vitale stressed that Northwestern supporters shouldn’t worry just yet. “All of our goals are still ahead of us,” the superback said. “We just have to win the rest of our games. We’ve been in a situation like this before, it’s all about how we responded.”

The Wildcats failed to respond Saturday in Ann Arbor, starting the game down a score when Michigan receiver Jehu Chesson took the opening kickoff 96 yards for a touchdown and set the Big House ablaze with energy before some fans had even turned on the broadcast. 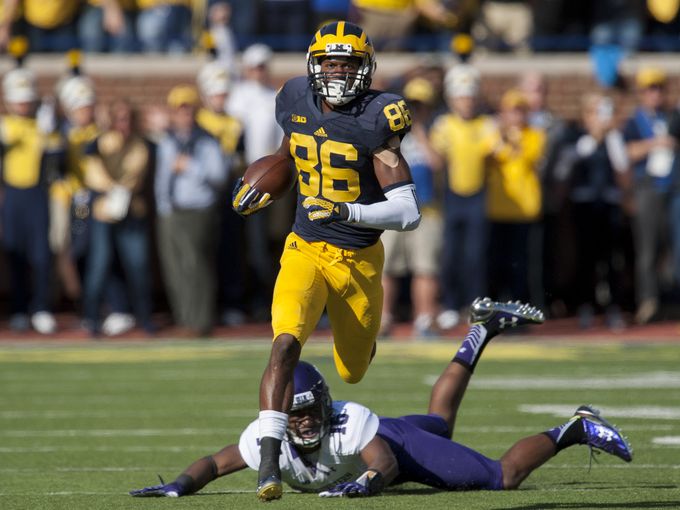 Jehu Chesson took the opening kickoff back, and it was all downhill from there for the Wildcats.

Coach Pat Fitzgerald wasn’t concerned by the early setback, calling it “just a momentum play. We’ve given up some momentum plays in the past and responded to it.”

Recovery, however, was more of a watchword than a reality on Saturday for Northwestern. The Wildcats’ first drive was emblematic of the rest of their afternoon, as Michigan’s staunch defense stuffed running back Justin Jackson on the first play, forced wide receiver Christian Jones into a dropped pass on the next, and hurried quarterback Clayton Thorson into an inaccurate throw on the third.

Michigan’s offense, on the other hand, cruised early, scoring in seven plays on a first drive which was highlighted by a 32-yard pass from senior quarterback Jake Rudock to tight end Jake Butt. Within five minutes of the opening whistle, the Wildcats found themselves down 14-0 to a rolling Michigan squad.

The first controversial moment of the game, and perhaps one of the most integral, came on Northwestern’s second offensive drive. On 3rd and 14 at Northwestern’s own 21, Thorson completed a 19-yard pass to Austin Carr to move the chains, and Thorson continued to move the ball down to Michigan’s 26-yard line, where Jackson was stopped for a gain of 1 when the Cats needed two for a first down.

Fitzgerald, down 14 points and desperately needing to make his mark on the game, elected to put points on the board and  sent his field goal unit onto the field instead of going for the first down.

“I really felt like we needed to get points on the board. It was 4th and 2 and we had gotten half a yard on the previous play. I thought any points would’ve been critical, and I felt confident in Jack [Mitchell],” Fitzgerald explained after the game.

Kicker Jack Mitchell missed the 42-yard field goal, and the Wildcats finished the long drive without any points to show for it.

When Northwestern needed to catch a break most, Michigan magnified the Wildcats’ poor execution, as the Wolverines marched 75 yards in just three minutes en route to their third touchdown of the game. A 27-yard completion from Rudock to Chesson and a 34-yard run by fullback Joe Kerridge set up Michigan inside the Northwestern 5, and Rudock punched it in on a read-option to put the Wolverines up three scores.

The stalwart defense that had carried Northwestern through the season’s first five weeks was dismantled by a quarterback who has thrown more interceptions than touchdowns this season. Defensive captains Deonte Gibson and Traveon Henry credited Rudock, complimenting his field vision and composure, but the Wildcat defense was porous, giving Rudock the time and passing lanes to turn simple throws into big gains.

Michigan cornerback Jordan Lewis’ pick-six put the Wolverines up 28-0 going into halftime and sealed the Cats’ worst half of the season. The will of Coach Fitzgerald’s team was put to the test. Could they recover from a horrendous first half and play a respectable second stanza?

The Wildcats’ first drive of the second half started auspiciously, as Jackson, who ran for only 25 yards on the day, broke off a 15 yard scamper to the Northwestern 40. However, three straight incompletions led to a punt, and the Wolverines took the ball down the field, added a Kenny Allen field goal, and increased their lead to 31-0.

The rest of the game played out solemnly, as Wolverine reserve Derrick Green’s fourth quarter plunge was the game’s only other score. Backup quarterbacks Zack Oliver and Matt Alviti handled the offense on separate drives, a move that reporters questioned after the game.

“We did not pull [Thorson],” Fitzgerald said. “I wanted to make sure as the game progressed that we could get some of the other guys some reps. Those guys are working hard in practice, and they’ve been very patient.”

Junior cornerback Matthew Harris was stretchered off the field in the second half following a scary knee to the head, but Henry reported that Harris was “standing on his own two feet. He was responding to us, and he’s good right now.”

In it’s biggest showdown of the season, were the Big House lights too bright for Northwestern?

Henry said, “I don’t believe the moment was too big for people”, and Fitzgerald blamed himself, saying, “I don’t think [the moment] was too big. We knew what we were coming into, the kind of team we were coming to play. I didn’t get the guys ready to go from the start.”

Northwestern has to get back on track this week, as a faceoff against undefeated Big Ten West leader Iowa awaits.

Vitale was right: the Wildcats can still achieve their season goals. In order to do so, recovery must happen quickly, and this Michigan meltdown must disappear from the squad’s collective memory.