Posted on October 15, 2015 by WNUR Sports Leave a comment 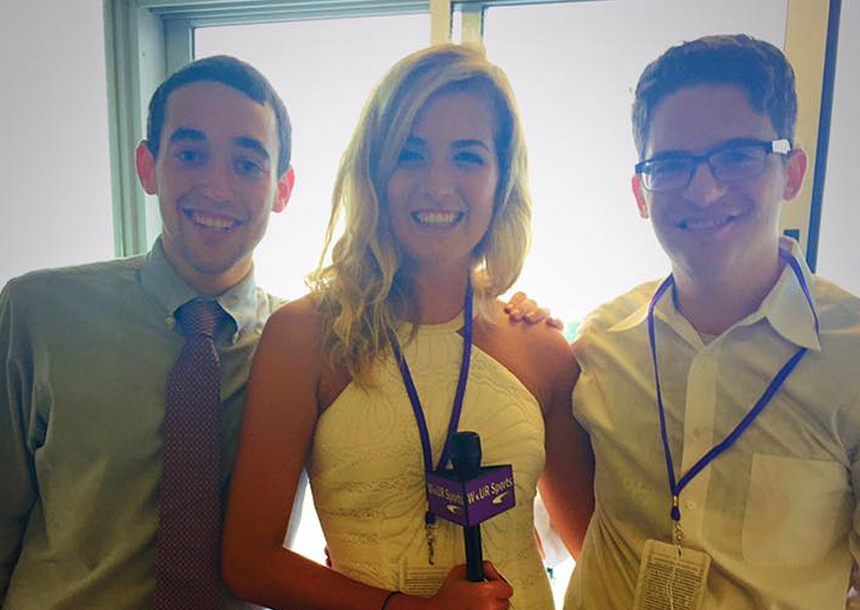 It’s hard to believe that four years ago, I made the decision to come to Northwestern.  For many of my colleagues, Northwestern was an easy decision: phenomenal academic institution and the number one journalism program in the country.  For me, I came across Northwestern in a different way.  I was recruited to run cross country in college.  If you would have asked high school Megan where I wanted to go to college, without hesitation I would have responded: Notre Dame.  Growing up in a very large Irish-Catholic family, Notre Dame was the dream for as long as I can remember, but for some reason, when I stepped foot on campus at Northwestern for my official visit for cross country, in the parking lot, immediately after my visit, I gave Coach April Likhite my verbal commitment.

I think about this day often, and I really don’t know what exactly made me commit that day, but I do know one thing, it was the best thing that has ever happened to me.  My commitment to Northwestern was fate, and at the time I didn’t even know it.

That day we drove home, and I thought, “wow, I am going to this fantastic school, what am I going to do with my life.”  Sports have always been my favorite thing in the world.  I remember watching sports with my dad.  We would laugh and quote Verne Lundquist’s famous “Yes, sir!” call at the Masters, or Bill Raftery’s famous “with the kiss!” call when a basketball player hit a jumper.  College GameDay was our favorite thing to watch every Saturday morning.  I had no idea that you could go to school to learn how to talk about sports on TV or on the radio, but I knew that was what I wanted to do.

So, I went home that day, after committing to Northwestern in the parking lot. I pulled out my computer and I googled “Northwestern sports reporting.”  The results left me speechless. I saw names like Mike Greenberg, Mike Wilbon, Darren Rovell, Rachel Nichols, Christine Brennan, and countless others.  Not only had I already been accepted to a fine academic institution, but this academic institution could offer me opportunities to chase my dream of becoming a sports reporter.  While I found myself struggling my freshman year and confused about if I had made the right college decision, I always came back to that day.  It was fate that Northwestern came into my life.

While at Northwestern I have been involved with a number of sports extracurriculars including anchoring/reporting for NNN SportsNight and writing for Lake the Posts and the The Post Game, WNUR has always felt like home.  WNUR has given me the courage to go outside of my comfort zone and push my boundaries in my role as a sports reporter.  For awhile, I was the only girl at WNUR meetings, and the men in this group welcomed me with open arms and offered me nothing but positive encouragement.  The men in WNUR believed in me more than I believed in myself.  I remember when I first joined I was terrified to call a game on the radio because not many women in the sports industry occupy this role. With the support of my friends at WNUR, I was convinced otherwise.  Thanks to the faith the men of WNUR had in me, I have made memories to last a lifetime.  I got the opportunity to be on the sidelines when Northwestern football defeated Notre Dame and then again when the ‘Cats beat a ranked Stanford team.  I got to fly on a charter airplane with the women’s basketball team and call the game at Nebraska’s brand new basketball facility.  I’ve gotten to host Sunday night talk shows and even show up Ben Goren in Northwestern sports history.

I don’t know if the men in WNUR will ever realize how grateful I am for the respect they have treated me with in my pursuit of becoming a female sports reporter.

WNUR is more than just a group of people who broadcast sporting events on the radio.  At WNUR we are a family.  We encourage each other to go out of our comfort zones and chase our dreams of becoming the next Jim Nantz or in my case, the next Sam Ponder.  While sometimes these dreams seem like they are light years away, the memories and friendships I have made over my last three years at WNUR remind me that it is the journey that matters most, and there are no other people in the world that I would embark on this journey with than my WNUR family.