Posted on October 27, 2015 by Michael Stern Leave a comment 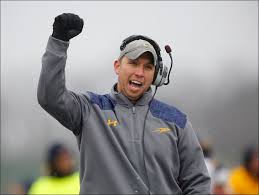 It’s a bye week for Northwestern football, but there’s no such thing as a bye week for six degrees. As there’s no Northwestern opponent, I’ll dig into one of my exotic interests and one of the story lines of the past couple weeks in college football: coaching changes. Here are my picks (both who I would pick and who I expect to be picked) for each of the top six open college head coaching jobs.

My pick: Geoff Collins, Defensive Coordinator, Florida. After a few small jobs, Collins landed his first major conference job as a graduate assistant at Georgia Tech under departing UCF coach George O’Leary. This is an odd coaching search, as O’Leary is resigning but remains signed on as a consultant at UCF through 2020. The longtime coach will probably pick one of “his guys” to replace him, and Collins did such an outstanding job as defensive coordinator at Mississippi State that Jim McElwain brought him to Florida. Collins is 44, recruits the Sunshine State well, and served two seasons as recruiting coordinator for O’Leary at UCF.

My prediction: Collins. This seems like a no-brainer, especially now that UCF offensive coordinator (and presumed coach-in-waiting) Brent Key wasn’t given the interim coaching gig. Collins offers the best combination of youth, ties (but not too close) to O’Leary, and location. The job should be his if he wants it.

My pick: Jeff Brohm, Head Coach, Western Kentucky. Brohm is a Louisville man through-and-through, having played quarterback for the Cardinals in the mid-90s and coached under Bobby Petrino at Louisville and WKU. When Petrino left for Louisville, Brohm took over as head coach of the Hiltoppers, where he’s been for two years. He seems like an odd choice for the Illini, given that most of his coaching has taken place in Kentucky, but he was the calming presence WKU needed after Petrino, and is the calming presence Illinois needs after Tim Beckman. Brohm also know Illinois, as he spent 2010 and 2011 as the team’s quarterbacks coach.

My prediction: Matt Campbell, Head Coach, Toledo. Campbell seems to be the distinctly Illinois hire. He’s justifiable, but also whacky. Campbell’s got awesome credentials: he’s in his fourth year at Toledo, and the Rockets have gone 33-13 under his watch, including 7-0 this year. While Campbell clearly deserves a head coaching job, it’s not clear if Illinois is the right fit. He worked FOR TIM BECKMAN at Toledo before becoming head coach, has no experience at the Power-5 level as a head man or assistant, and is only 35 years old.

My pick: Kasey Dunn, Wide Receivers Coach, Oklahoma State. Dunn’s been the receivers coach in Stillwater for the past five years, responsible for coaching up the wideouts in Mike Gundy’s no-huddle scheme, and the Cowboys are unbeaten so he’s having a pretty good year. Gundy spent four years at Maryland (Pat Fitzgerald coached in College Park with Gundy in 1998 but that’s another story for another time), and Dunn was hired as the Terps’ wide receivers coach in 2008. Dunn never coached a game for Maryland (he left to serve as the Seahawks’ running backs coach), but he recruited to the school. He’s young (graduated college in 1992) and runs an up-tempo offense.

My prediction: Matt Rhule, Head Coach, Temple. Rhule is the definition of a hard-nosed, defensive coach. He played for Joe Paterno at Penn State and coached under Al Golden at Temple before taking over the Owls in 2013. Temple went 2-10 in his first season, and the Owls are now 7-0 and hosting College Gameday. He’s only 40 and will make the Terps tougher; as an added bonus Temple is an Under Armor school so Rhule won’t even have to re-do his whole wardrobe.

My pick: Jay Graham, Running Backs Coach, Florida State. Graham is an SEC running back. He played at Tennessee and coached under Steve Spurrier at South Carolina before leaving for his alma mater, and then Tallahassee. Perhaps you’ve heard of some of his pupils: Marcus Lattimore, Karlos Williams, Devonta Freeman, Dalvin Cook. Basically, the big bell-cow back South Carolina needs to win again. Add in his work under Spurrier and his youth (he’s only 40), and Graham is the perfect candidate for the Gamecocks.

My prediction: Justin Fuente, Head Coach, Memphis. Fuente grew up in the southwest (he played at Oklahoma and coached at TCU), but he’s quickly caught the attention of the southeast by rebuilding Memphis and beating Ole Miss. Fuente’s 39, he runs a high-speed offense, and he’s developed Andy Dalton and Paxton Lynch. Fuente is ready for a bigger job, and of the available options he makes the most sense with the Gamecocks.

My pick: Mario Cristobal, Offensive Line Coach, Alabama. Cristobal played on two national title teams at Miami (1989 and 1991) and served as a graduate assistant for the Hurricanes from 1998-2000, or right before the last time they dominated college football. He followed Hurricane defensive coordinator Greg Schiano to Rutgers, then returned to Coral Gables after three seasons. Cristobal has head coaching experience from Florida International, where he led the Panthers to the only two bowl games in the program’s brief history and turned down the Rutgers head job before being fired after a disappointing 2012 season. Since his firing, Cristobal has been on Nick Saban’s staff at Alabama. He can clearly coach, and he has the support of many former Hurricanes.

My prediction: Cristobal. He’s gaining momentum and has the support of players from all three of Miami’s championship teams.

My pick: Hue Jackson, Offensive Coordinator, Cincinnati Bengals. USC isn’t a normal head coaching job. The Trojans need a CEO, and Jackson fits that role. His resume also looks eerily similar to Pete Carroll’s. Both played at Pacific, and both had limited success as an NFL coach. Jackson also coached at USC for four years in the late-90s, and helped recruit Carson Palmer. He is connected to Trojan success, yet distant from the Carroll regime. He’s outside-the-box, but would fit well.

My prediction: Kyle Whittingham, Head Coach, Utah. This one seems obvious to me. Whittingham is the anti-Sarkisian. He’s defensive-minded and disciplined, and he’s built Utah in to a Pac-12 contender. His father Fred was an assistant coach for the Los Angeles Rams for ten seasons, so he’s got area ties as well. Whittingham also doesn’t get along with Utah’s athletic director, and both his coordinators left after last season. He shouldn’t be a hard sell, and he’d also do a fine job for the Trojans.