Around the B1G: No Northwestern, Who to Watch? 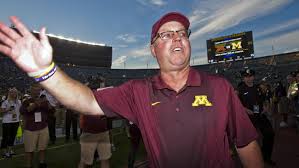 Northwestern may have a bye, but our Ben Goren still plans on watching Big Ten football this Saturday, no matter how bad the slate of games is.

Minnesota coach Jerry Kill resigned early this week due to health concerns. Can the Gophers rally and win one for their former coach against Michigan in Ben’s most watchable Big Ten game of the week?

This is the worst week of Big Ten football that I’ve seen this year.

Seriously, all of these games are awful and you should avoid watching them.

But, as is my burden, I will be watching all five this weekend.  Yes, this Saturday, I will be live blogging my experience of watching every snap of every Big Ten Football game on the schedule.  And it will be horrific.

In that vein, instead of previewing these games based on what it means for the divisional races (none of them mean anything) or breaking down these team’s futures (we know all of them by now), I will be rating this week’s games based on “watchability.”  A 10 is reserved for games like Alabama-Auburn from a few years ago.  A one is reserved for games played by Rutgers.  Let’s get it on.

File this one under, “I guess it’s on, and I recognize these players, so eh, I’ll leave it on in the background.”

Any game in Happy Valley has some degree of watchability based just on the atmosphere, but this game shouldn’t be much fun.  But Penn State only beat Maryland by 1 last week and Illinois is still Illinois.  You can watch, but please, please, please have a better game on the other TV.

File this one under “I am incredibly sadistic and also enjoy watching train wrecks so, sure, I’ll watch this game.”

Nebraska has already notched its fifth loss in the post-Pelini era.  The one reason to watch this game is if things start going horrifically wrong Nebraska could lose its sixth, pushing them to the brink of bowl ineligibility, against freaking Purdue.

I mean it won’t happen, but what if it did?

File this one under “Rutgers is an awful team that shouldn’t be in the Big Ten and I won’t watch this out of protest.”

But, I guess, Rutgers has Leonte Caroo, one of the most exciting athletes in the Big Ten, and Wisconsin is still fighting to stay in the Big Ten West hunt without Corey Clement, so there are storylines here.  Just not enough to ever excuse actually watching this dumpster fire.

File this one under “OH MY GOD, IOWA IS A TOP TEN TEAM, DOES IOWA KNOW, WHAT’S HAPPENING, IT’S THE END OF DAYS.”

A top ten Iowa team with nothing but cupcakes remaining is a frightening thought for any football fan.  They have to slip up eventually, right?

An undefeated top ten team at home is insta-“watch this” quality, so why not?  Kinnick Stadium is going to be frightening.

File this one under “This game is going to be good to watch, but for all the wrong reasons.”

It’s very sad to see Jerry Kill leave Minnesota.  A fantastic coach, sure, but a great person more importantly.  Discussions on how impressive it may or may not be to take Minnesota and turn them into a team that can consistently make bowl games can wait.  Minnesota is going to be playing with a lot of emotion, and I think just about the whole country is going to be rooting for them.

vs. Penn State on Mixlr II.