Hot apple cider in my mug.  Rain outside my window.  We’re at peak comfy and the games ain’t even started yet.

11:05: One series in to our grand project, and Illinois has -1 yard of offense and one punt.  I am immediately regretting this.

11:10: Wisconsin is now already up a field goal against WNUR’s second favorite team, Rutgers.  It’s hard to imagine Iowa losing two games to allow the Badgers back into the Big Ten West title game, but that’s a solid tea,  that should give NU a ton of trouble in Camp Randall in a couple weeks.

11:14: Actual quote from the Penn State-Illinois broadcast: “Wes Lunt is one of the best at getting the ball out of his hands.” Somehow I doubt that. Already the 3rd punt coming from Happy Valley. They haven’t even played 5 minutes yet. Launch this game into the sun.

11:22: STUFF HAPPENING. Penn State big play on a wheel route, Nebraska jumping offsides on a PAT (why?), Corey Clement back and in the end zone, Wisconsin up 10-0. How many games does Mile Reilly have to lose to get fired? Does losing to Purdue count as, like, 10 losses?

11:30: Penn State scored a touchdown, and even though they missed the extra point, you gotta feel that 6 points is an insurmountable lead.

11:40: In a serious, #ANALYSIS moment, Illinois actually has a good gameplan on how to nerf Penn State’s pass rush.  They’ve thrown a ton of short passes, and while the execution hasn’t been superb, they’ve moved the ball OK at times.  I’m not sure Northwestern can be precise enough to take that strategy and use it next week, though. 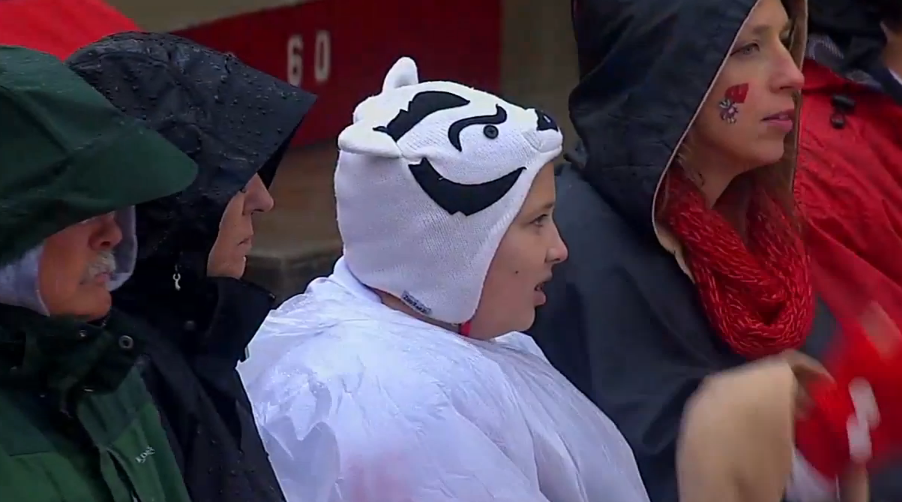 11:49: Ryker Fyfe in the game for Nebraska and he marches to Huskers into the end zone to cut the mighty Purdue Boilermakers lead to just 5.  Words cannot amply express how stoked I’d be if Purdue somehow won this game.

11:52: You might ask why we’re not updating the Rutgers game a whole lot. This should help explain our thinking.

So, in summary, Rutgers has netted a total of 33 yards on 2 punts today.

11:55: Letting someone complete a 31 yard pass for a touchdown on 4th down is bad, IMO. 17-3 Wisconsin over Rutgers. Just 5 more minutes and I can make Rutgers name jokes. Brace for impact.

11:58: I’ve just realized that in less than an hour of football, Big Ten teams have combined to miss 3 extra points. PEAK #COLLEGEKICKERS.

12:00: So here’s what I’ve learned in an hour. Illinois is still not good, PSU is going to give NU a ton of problems if Matt Harris isn’t healthy.  Purdue is bad, but Nebraska’s reluctance to be good has won out in West Lafayette so far. Wisconsin jsut caught an interception after the ball bounced off a linebackers helmet. Buttgers is horrific.

12:07: 5th punt coming from Illinois.  Somehow the tweet below is about a different Big Ten game.

This game needs NEEDS a streaker.

12:13: ILLINOIS vs PENN STATE UPDATE: there was just a 5 minutes sideline interview with some ex-coach who was not even tangentially related to the game. The coach couldn’t hear the sideline reporter, the answers made no sense, and I missed analysis of a pretty impressive set of plays from Penn State. I don’t like sideline reporters.

12:15: It must be a physical impossibility to broadcast a Christian Hackenberg broadcast without mentioning at least 40 times that he was a number one recruit out of high school.

12:19: Ryker Fyfe intercepted.  Purdue back in the red zone. Purdue has won one game this year. It was against Indiana State. Nebraska is not in a good place.

12:23: This is going to shock you, but Chrstian Hackenberg was sacked. Again. Thats three this half for Illinois.

12:35: Penn State’s pass rush is fun.  Them going after Northwestern’s front next week will probably not be fun.  Northwestern is going to need everyone healthy and playing well if they want to keep Clayton Thorson upright.

12:38: BIG TEN TEAM PUNTING FROM THEIR OPPONENT’S 40, I DON’T CARE IF IT’S 4TH AND 17, IT WILL ALWAYS BE FUNNY.  Unfortunately, it worked really well and Penn State will take over inside their own 5.

12:41: Finally, every game is at halftime.  This is maybe the most Big Ten day I can remember. 3 missed extra points, more punts than can be explained by science, and Purdue is beating a real FBS team.  I’m going to enjoy the next few minutes of watching real football.  Wassup FSU?

12:53: Oh god, Rutgers vs Wisconsin is back on.  Rutgers has already punted. What is the mercy rule in football?

12:56: Do we need to have the “how much better than Iowa is Wisconsin with Corey Clement?” debate?  I think we might.

1:08: Nebraska-Purdue is the best game of the Big Ten slate so far.

1:10: Penn State just hit their first extra point in 3 tries and the crowd went crazy.  Also, Nebraska already scored a touchdown to cut Purdue’s lead to 21-16. QUICK, EVERYONE PUT THE GAME ON.

1:15: Nothing exciting is happening so here’s that Christian Hackenberg touchdown catch.

This is Christian Hackenberg’s first career @PennStateFball catch AND TD grab. Brought to you by @hotelsdotcom. https://t.co/mWrEh9nuPp

1:25: Wisconsin has scored again. Northwestern is not going to have fun in Camp Randall.

1:30: Just your average 83 YARD TOUCHDOWN PASS FOR PURDUE FOR THE LOVE OF GOD STOP THE FIGHT IT’S OVER.

1:35: PURDUE PICKED OFF ANOTHER PASS GOOD LORD WHAT THE HECK IS GOING ON IN HERE.

1:45: Officially out of words to describe this Purdue beat down.  Everything that can possibly be said has been said already.  Penn State is up 25-0.  Wisconsin is up 48-10. There are no good games on.

1:54: Wake me up when something exciting happens. I’m getting lunch.

2:04: Wait is Nebraska actually going to come back?

2:17: Purdue is living proof that no matter what’s happening, it can always get worse.

2:18: Nebraska is living proof that no matter what’s happening, it can always get worse.

2:41: Alright, refueled, ready to go. Iowa football time. Can they lose so we don’t have to deal with 11-1 Iowa college football playoff talk?

2:51: One possession in to the afternoon game, and we have a missed field goal.  Anyone who took a Big Ten kicker in fantasy this week is firmly on the struggle bus.

2:54: Nebraskans are handling this loss well.

@dirkchatelain I still love my Huskers but here is my treat giveaway bowl for the night pic.twitter.com/pIr2wDqNyS

2:59: Well the good news is that Northwestern isn’t the only one who can’t stop outside zone plays against Iowa.

3:10: We got the really fun “interception, fumble, recovered by the offense for a fresh set of downs” play. Best offense Maryland has showed so far.

3:24: 3.5 hours in, and I’m beginning to question whether there is goodness in college football.

3:31: Iowa is a genuinely good football team.  If they played a hard schedule, they wouldn’t be ranked as high as they are now, but with Beathard at full healthy, this is a no joke top 20 team.  I don’t think they’re going to slip up before the Big Ten Championship game.

3:36: Akrum Wadley is an ok running back in a system that fits him perfectly.  With those stretch plays and his speed, he just needs to make one guy miss.  He does that a lot.

3:59: Well I was right, Maryland got the 3-and out. But the punt was blocked! Exciting! BIG TEN FOOTBALL BABY HERE WE GO!

Another view of that tipped punt. #Hawkeyes pic.twitter.com/aUeQCVI7Cs

5:01: Through three quarters and Maryland is still scoreless.  Make it stop. Please. Just make it stop.

5:17: I think there should be more flags in this game. That would make it more fun.

5:29: Back to back 80+ yard touchdowns? Alright, you have my attention.  Will Likely is very fast.

5:46: Any other weekend I’d be watching Texas Tech and Oklahoma State race each other to see who can score 100 points first.  Right now I’m watching Kirk Ferentz chew on the sideline. This is fine.

6:12: Well while I wait for Minnesota vs Michigan to start, I do get to watch the closing minutes of State vs Tech. Time for college football cocaine.

6:46: In a vacuum, I don’t think Minnesota would have a prayer of keeping up with Michigan.  But with all the emotion they’re packing, it’s not surprising to see them jump out to an early lead. But Michigan answering should take the wind out of their sails.

6:48: WOO FULLBACK TOUCHDOWN THIS IS THE BIG TEN I KNOW AND LOVE.

7:10: Shannon Brooks is going to have a really darn good career. It’s a shame he plays on an offense that lets teams put 12 guys in the box.

7:27: Mitch Leidner touchdown passes are like finding $20 in your pocket.

7:38: If Minnesota isn’t recklessly aggressive with the ball back and less than a minute to play in the half, I will turn off this game.

7:46: Well Mitch Leidner’s Minnesota team, thanks to a host of good bounces, is beating Michigan. I hope it continues.

8:10: Two-way players are so much fun. Everyone focused on Peppers and Chesson takes off for 20+ on the reverse.  Beautiful.

8:30: I feel bad for Mitch Leidner because if he woke up one day and became a good QB, no one would believe what they’re seeing.

8:51: Michigan is actually going to lose this game because everything is awesome.

9:21: Michigan is actually going to win this game because everything is awful.

9:36: MINNESOTA IS GOING TO WIN BECAUSE EVERYTHING IS AWESOME WOOOOOO LET’S PARTY EVERYONE.