Men’s Basketball Poll Release: Wildcats Could Get a Shot at Number One

Posted on November 2, 2015 by Michael Stern Leave a comment 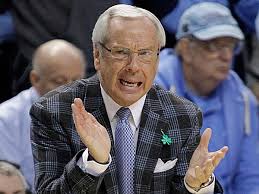 The First AP Poll of the season is out, and Northwestern is not ranked.

However, one of the Wildcats’ non-conference opponents sits in the top spot.

North Carolina is ranked number one in the nation by the AP Poll ahead of their November 23 neutral-site matchup with Northwestern.

The Wildcats hope to make Roy Williams confused and angry on November 23 in Kansas City. The Tar Heels could be ranked number one at game time.

Before the Heels and ‘Cats battle in Kansas City, North Carolina faces Temple, Fairfield, Wofford, and Northern Iowa. If Roy Williams’ squad takes care of business in those four contests, Northwestern should get a game against the top-ranked team in the land.

The last time NU faced the nation’s best was January 30, 2013, when the Wildcats fell 68-46 to Trey Burke and Michigan. The Wildcats see their fair share of top-five opponents in the Big Ten, as they’ve faced top-five Wisconsin three times in the last two seasons and a top-five Michigan State team once.

Going back to the start of the 2001-2002 season, the Wildcats have faced number one six times, including the Michigan game. NU has lost all six games. The ‘Cats lost two nail-biters to Jared Sullinger, Aaron Craft, and Ohio State in 2011 (one by a single point on a Sullinger free throw with three seconds to go), and were blown out three times by Luther Head, Deron Williams, and Illinois in 2005.