Posted on November 3, 2015 by Michael Stern Leave a comment 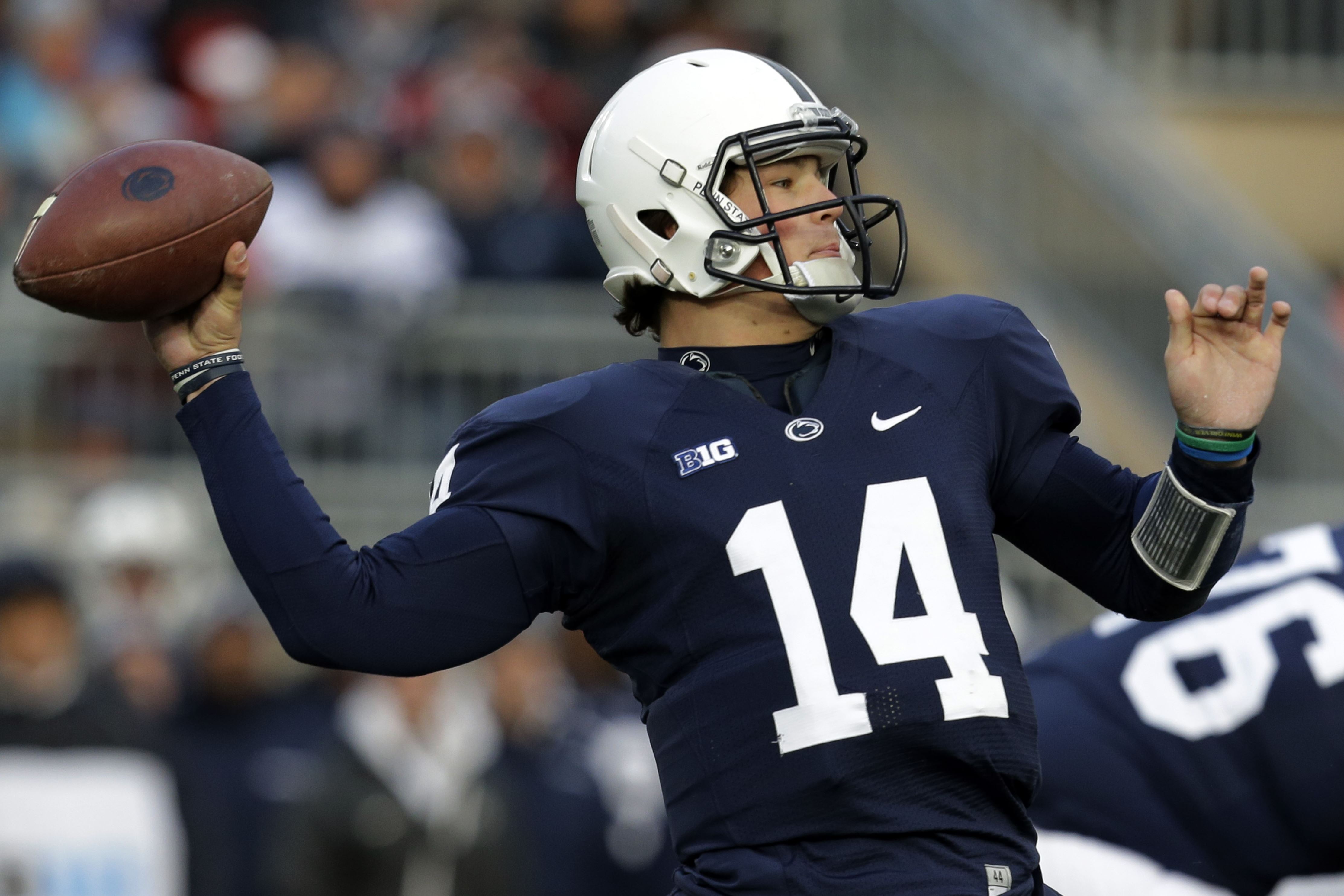 Christian Hackenberg might be the best Penn State quarterback ever, and he leads the Lions against Northwestern Saturday. Photo Credit: NFL Draft Diamonds

The Lions sit at 7-2, 4-1 in the Big Ten. Their season-opening loss to Temple looks better now that the Owls are ranked and gave Notre Dame a game, and Ohio State blew them out, but that’s understandable. Penn State has three tough tests to finish the season, as a home date with Michigan and a trip to East Lansing follow their game in Evanston. For the Lions to finish strong, their monstrous defensive line will have to play well (led by NCAA sacks leader Carl Nassib), and their offensive line must protect golden boy quarterback Christian Hackenberg.

Hackenberg is playing his third year as Penn State’s starter, and gurus project him to be a first round pick in the next NFL Draft. While his numbers this year are less than stellar (he’s got a 54.5% completion rate, Trevor Seimian posted a much-maligned 58.2% a season ago), he’s cut back on his interceptions (two this year after 15 last year) and might be one of Penn State’s best quarterbacks ever. Where exactly does Hackenberg rank among Lion signal-callers? Who could be better than him? Six degrees ranks the top Penn State quarterbacks not named Christian Hackenberg.

Shaffer played for four years under Joe Paterno, starting as a junior and a senior. In his junior season, Shaffer threw for 1,366 yards, eight touchdowns, and ten picks as the Lions completed and 11-0 regular season before falling to eventual champion Oklahoma in the Orange Bowl. As a senior, Shaffer led the Lions to glory, throwing for 1,510 yards, nine touchdowns, and only four picks. Penn State finished 12-0 and beat Miami in the Fiesta Bowl to claim the national title. Shaffer didn’t have an NFL career, but he had quite the Wall Street career, spending nearly a quarter-century at Merril Lynch and Goldman Sachs before leaving his job as co-head of credit sales at Goldman in August of 2014.

Lucas started for the Lions as a junior and senior, and used a “stellar” 1959 campaign to capture the Maxwell Award and finish second in Heisman voting. Lucas’ ’59 stats weren’t pretty (913 yards, five touchdowns, eight picks) but they were enough to lead the Lions to a 9-2 record and a Liberty Bowl win AND catch the eye of the Washington Redskins, who selected Lucas with the fourth pick of the 1960 NFL draft. Lucas never played for the Redskins, but he moved over to the AFL and became the first player ever to sign with the Buffalo Bills. He made three starts over two years before retiring and returning to Penn State, where he was assistant athletic director until 1998. 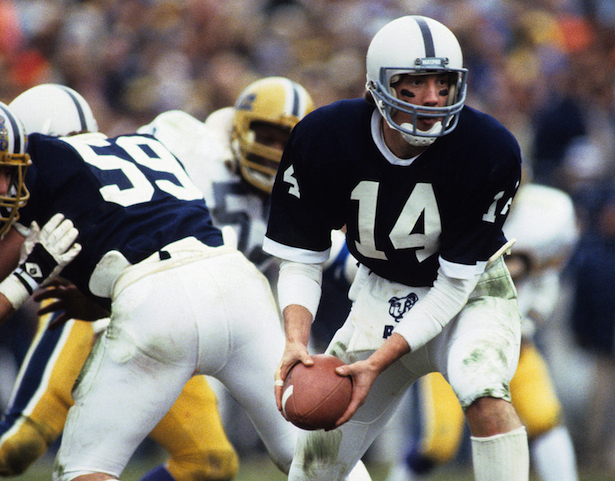 As a sophomore, Blackledge took the starting job from Jeff Hostetler and led the Lions to a 10-2 record and a Fiesta Bowl win over Ohio State. Junior year was more of the same, as Blackledge started again, threw more interceptions than touchdowns again, and led the Lions to 10 wins and the Fiesta Bowl again. As a senior, however, Blackledge and running back Curt Warner led the Lions to a title, winning 11 games, including the Sugar. Blackledge parlayed his senior success into a first-round NFL selection. The Kansas City Chiefs took Blackledge seventh overall in 1983, ahead of Hall of Famers Jim Kelly and Dan Marino. He started 29 NFL games over seven season with the Chiefs and Steelers. He currently serves as an ESPN college football commentator and high school basketball coach in Canton, Ohio. 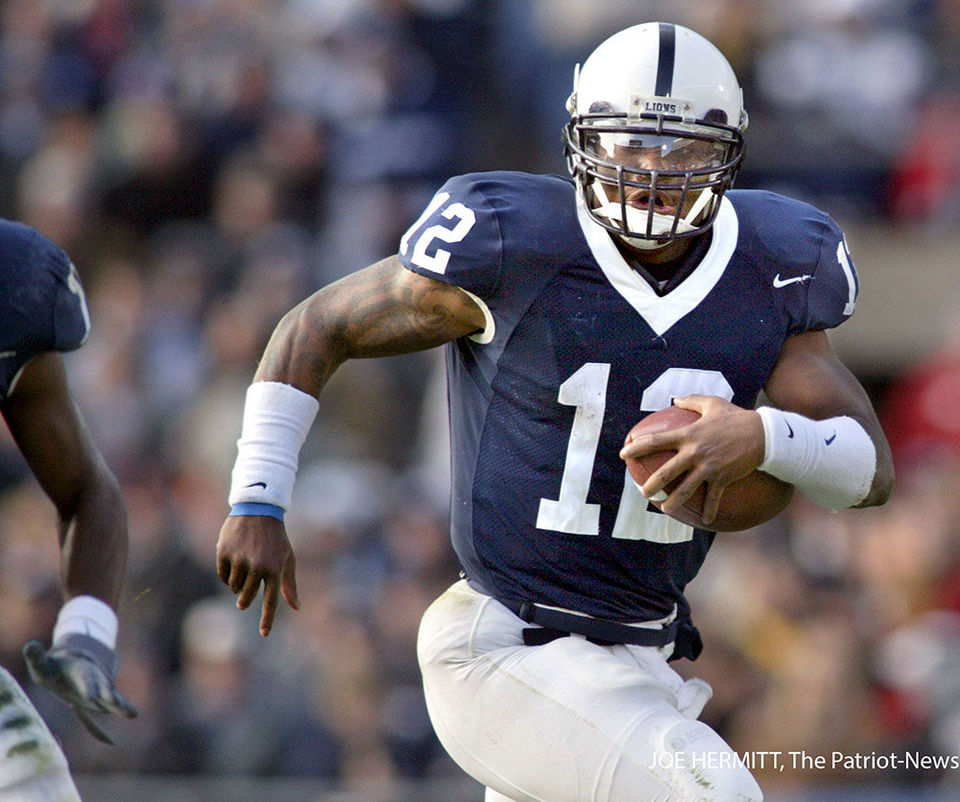 That’s right! Seahawks fullback Michael Robinson quarterbacked Penn State’s 2005 Big Ten and Orange Bowl champions. Robinson started at running back and receiver as an underclassman, and in his only year as a full-time starter at quarterback, Robinson was a dual threat. He threw for 2,350 yards and 17 touchdowns, ran for 806 yards and 11 touchdowns, and led the Lions to an 11-1 record. Robinson didn’t have a clear NFL position, so he fell to the 49ers at pick 100 of the 2006 draft. After four seasons in San Francisco, Robinson joined Pete Carroll in Seattle, where he played four seasons, blocked for Marshawn Lynch, made a Pro Bowl, and won a Super Bowl.

In addition to having an awesome name, Milt Plum played a solid quarterback for Penn State. He started for only one season (1956), and didn’t have awesome stats. Plum threw for 675 yards, six touchdowns, and seven interceptions, and the Lions finished with a middling 6-2-1 record. The Cleveland Browns took a chance on Plum in the second round of the 1957 NFL Draft, and he was a solid professional quarterback. Plum played with Jim Brown in Cleveland for five years and made the Pro Bowl twice before leaving for Detroit, where he stayed for six years, never made a Pro Bowl, and led the league in interceptions in 1965. Plum moonlighted as a backup for the Rams (1968) and Giants (1969) before calling it a career. Not bad, Milt. 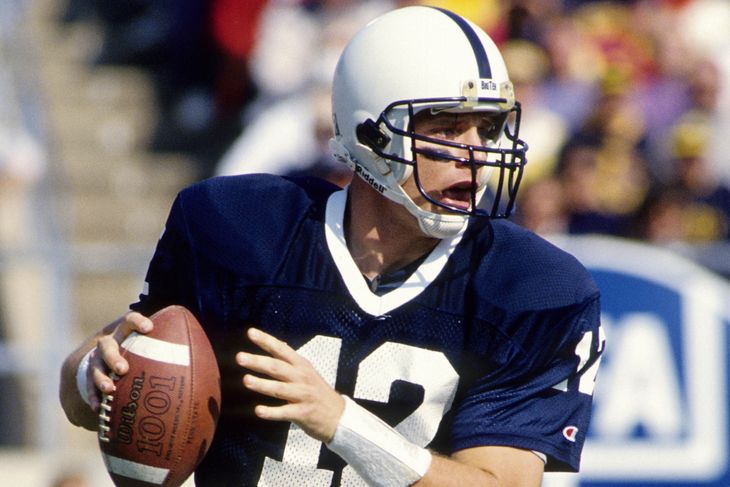 The best Penn State quarterback there ever was graced Happy Valley in the mid-90s. Collins saw playing time as a sophomore before taking the reins as a junior in 1993, when he led the Lions to a 10-2 record and a Citrus Bowl win. As a senior, Collins and Penn State went unbeaten, won the Big Ten and the Rose Bowl, and didn’t win the title. Collins did take advantage of a nasty team around him (Ki-Jana Carter and Bobby Engram, anyone), throwing for 2,679 yards, 21 touchdowns, and only seven interceptions. He finished fourth in the Heisman voting, and the Carolina Panthers made him the fifth pick of the 1995 NFL Draft. Collins had an ABSURDLY LONG career, playing 17 seasons for six teams. Among the highlights: two Pro Bowls, an NFC title game in his second season with the Panthers, a Super Bowl loss in his second season with the New York Giants, and a 13-win campaign in his second season with the Tennessee Titans. Among the lowlights: leading the league in interceptions with the 2004 Raiders and participating in the 2011 Peyton Manning-less Indianapolis Colts debacle. Don’t let images of 38-year-old Kerry Collins playing for the two-win Colts ruin what was a serviceable NFL stint. If Christian Hackenberg can stick in the league anywhere close to as long as Collins did, he’ll have had a successful career.