Posted on November 3, 2015 by WNUR Sports Leave a comment

Up next in our Men’s Basketball Season Preview, Henry DaMour looks at some key new faces for the Wildcats. Earlier today, Josh Wasserman broke down some key returning players. Stay tuned to wnursports.com for continuing coverage (both written stories and live broadcasts) of Wildcat Basketball. 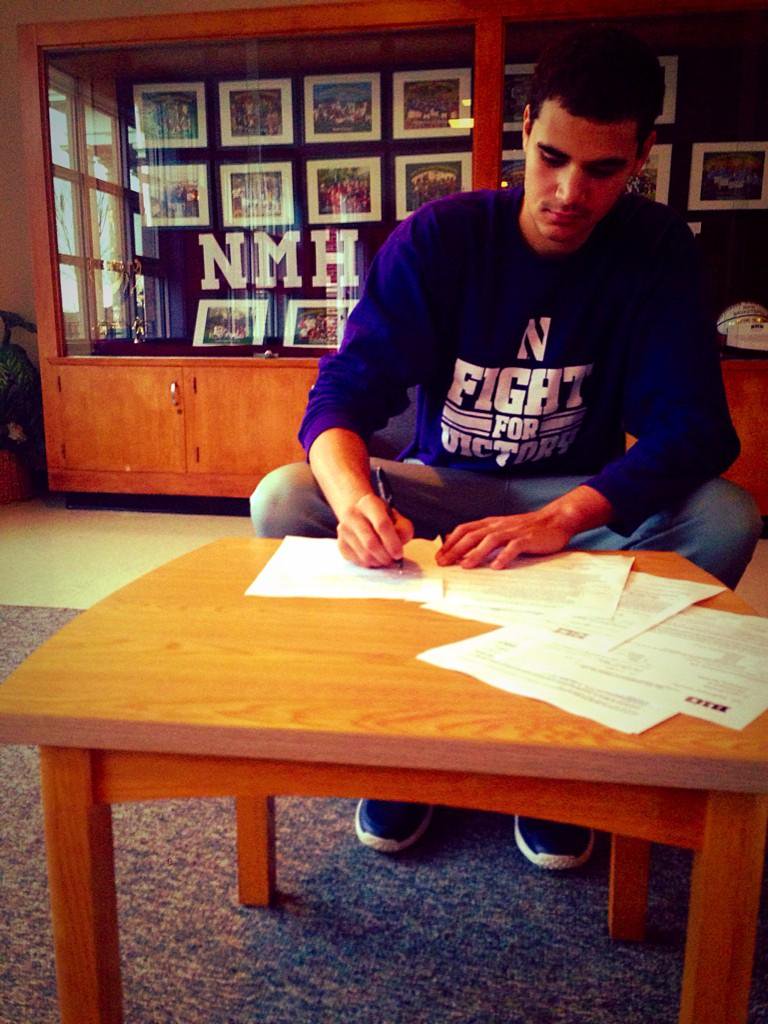 When Aaron Falzon put pen to paper, the Wildcats snagged their second four-star recruit in as many years.

With every new basketball season comes the departure of seniors and transfers, the never-too-distant feeling of apprehension, and the question of whether or not the new kids on the block can eventually carry on the team’s legacy. While that legacy as of late for Northwestern basketball hasn’t exactly amounted to much, the new talent on this team, especially the freshman class, has Northwestern poised to make some noise in the Big Ten this year. Northwestern’s 2015 freshman class consists of recruits PF Aaron Falzon, SG Jordan Ash, PF/C Derek Pardon, and preferred walk-on F Charlie Hall.

Falzon, Ash, and Pardon are all three-star recruits, ranked top 50 in their respective positions for the class of 2015 by ESPN. Hall himself has an impressive resume as a non-recruit, leading his Crossroads High School team to its best playoff finish since Baron Davis was team captain. Pardon, all things considered, is a great raw talent. He will see some playing time in the near future, especially in these first few exhibition games, but it could become limited because he shares the same position as Falzon. Shooting guard Jordan Ash brings strong athleticism and keen basketball instincts. He uses all of his 6’2”, 185-pound frame to work both ends of the court, can get to the rim with his strong handle, and has the ability to finish through contact.

The standout from this freshman class, though, is Falzon, Northwestern’s second 4-star recruit in the last two years (Vic Law is the other).  Falzon will play this year as a sixth man. His high school accolades include school records for points in a single game (45) and 3-pointers in a single season (114), and the No. 75 national ranking for the class of 2015 by ESPN. Hoopniks.com’s Kellon Hassenstab called Falzon “arguably the top power forward long-range pure shooter in the country.” With a 6-foot-8 frame, insane three-point shooting ability, and athleticism unheard of for his size, Falzon is tough to guard.  As an added bonus, he can pass and move the ball around as well as any Big Ten freshman.Collins will use him to give guys rest and knock down some shots from downtown, even as a freshman. If I have to put a weakness on this kid, it would be his relatively light frame. At 213 pounds, he isn’t exactly filling out all of his 6’8” build. While that won’t hurt him on offense, the physicality of other Big Ten forwards could be a rude defensive awakening.

Falzon’s college readiness may be questioned, but it’s worth mentioning that in his AAU days, he played and practiced alongside college and pro standouts Nik Stauskas (Michigan/Philadelphia 76ers) and Stanley Johnson (Arizona/Detroit Pistons). He has been around guys who have thrived in power conferences, and if Falzon can prove he’s ready to do the same, Northwestern basketball could be in for an exciting ride these next few years.