Posted on November 5, 2015 by Ryan Fish Leave a comment 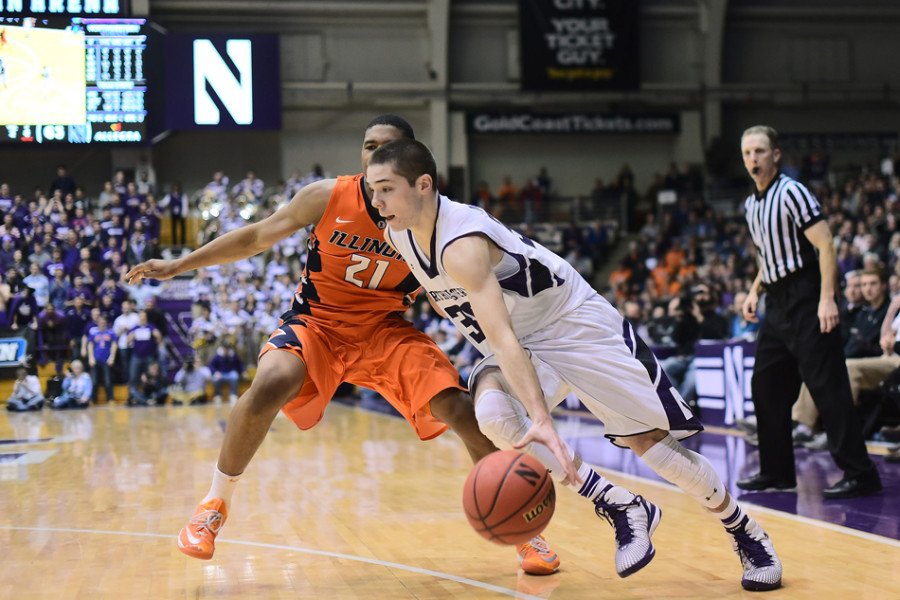 It wasn’t quite the 102-52 drubbing of McKendree that Northwestern enjoyed in last season’s season-opening exhibition, but the Wildcats got a comfortable ‘W’ nonetheless.

Northwestern shook off some rust and showed it was the better team at Welsh-Ryan Arena Thursday night, beating the Quincy Hawks 80-64. Leading wire-to-wire, freshman Aaron Falzon led the way for the Wildcats with 15 points on only six shots in 13 minutes. The game wasn’t as close as the 16-point difference may suggest.

“Tonight was an excellent exhibition game for us,” head coach Chris Collins said. “It was good to play Quincy, a veteran, scrappy team, to expose what where we need to improve.”

Falzon led the team in points, but Tre Demps also had an impressive game. The senior had 13 points, five rebounds and six assists while only committing one turnover.

“Thought we did some good things as a team,” Demps said. “Executed well offensively. We wanted to play harder and felt we left that up in the air.”

Joey van Zegeren’s Northwestern debut also went well, as the transfer from Virginia Tech put in eight points, 10 rebounds and a couple of powerful dunks . Although Collins said that van Zegeren “could’ve been stronger with the ball” at times, he also had high praise for the graduate student.

“Joey’s size is a difference maker for us,” Collins said. “He gives us a dimension as a team that we’ve never had before.”

Demps started the game along with Bryant McIntosh, Alex Olah, Nathan Taphorn and Sanjay Lumpkin. While Demps, McIntosh and Olah project to be starters heading into the season, Collins said that tonight’s starters were simply the more veteran players and that the team would see “a lot of different lineups” this season.

Olah was less active than van Zegeren for much of the night, but still had 12 points and four rebounds. Vic Law had 10 points off the bench while Scottie Lindsey nailed three three-pointers in 23 minutes. Every player on the roster got into the game at some point.

“Overall, it’s always great to get out there and play,” Collins said. “I thought a number of guys did a lot of positive things. Especially early, I liked our pace.”

Northwestern used its advantage in size and athleticism for much of the night, out-rebounding Quincy 48-33 while shooting 50 percent from the field and 48 percent from deep.

“He can shoot the leather off the ball,” Collins said.

When asked about his offensive game, Falzon–who shot four-of-five from deep and five-of-six overall–seemed to agree.

“I can drive the ball but it’s my shot that’s gonna set that up,” he said. “Shooting the ball is what I do best.”