Posted on November 10, 2015 by Michael Stern Leave a comment

Drew Brees took Purdue to the 2001 Rose Bowl, but was that the best team in Boilermaker history?

The Boilermakers are 2-7 this season, with one win coming against FCS Indiana State and the other against tough-luck Nebraska. Coach Darrell Hazell’s team played Michigan State tough, but were routed on homecoming by Illinois last week, 48-14. Purdue boasts a dual-threat quarterback (David Blough), two talented receivers (Danny Anthrop and DeAngelo Yancey), and a porous defense (tied for 120th in FBS football with 159 plays of 10 or more yards allowed…in the same number of games, Ohio State has had 155 plays go for double-digit yards).

It’s been a rough stretch for Purdue since longtime coach Joe Tiller’s retirement. Over the seven years since Tiller retired, the Boilermakers are 28-55 overall, 15-38 in Big Ten play, but the Boilermakers have been good before. Need proof? Here are the six best seasons in Purdue history.

Expectations were high for the Boilers heading into 2004. Kyle Orton returned at quarterback, and a nasty defense led by Rob Ninkovich, Ray Edwards, and Bernard Pollard prepared to wreak havoc on the Big Ten. Purdue started 5-0, routing Notre Dame and winning at Penn State, and rose to the number five national ranking. It was all downhill from there, though, as the Boilers lost four straight conference games by single digits (including a game 13-10 at Northwestern when Noah Herron scored the winning touchdown for the Wildcats with 38 seconds left). Purdue finished strong, beating Ohio State and Indiana to reach the Sun Bowl. Late-game woes returned for Purdue in El Paso, as Sam Keller threw the game-winning touchdown with 43 seconds left to lift Arizona State past the Boilers. The record is not impressive, but this 7-5 team was far more talented (and unlucky) than several of the school’s other football teams. 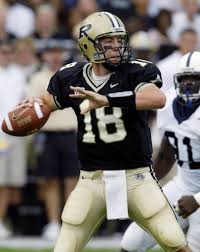 Kyle Orton had the Boilermakers highly regarded in 2003 and 2004, but Purdue fell short of expectations each year.

The 2003 squad set a high bar for 2004. Orton led the offense, while Shaun Phillips took charge of the D. Purdue started slow, losing in week one to Bowling Green before reeling off six wins in a row to rise to the number ten ranking ahead of a matchup with thirteenth-ranked Michigan. Braylon Edwards caught two touchdowns and Michigan blew out Purdue, but the Boilers rebounded with two straight wins, improving to 8-2 heading into a big-time matchup with fourth-ranked Ohio State. Purdue took the Buckeyes to overtime, but Mike Nugent kicked the game winning field goal in the extra session, dropping the Boilers to 8-3 and the Capital One Bowl, which was another crushing loss for the black and gold. Purdue trailed 27-17 with four minutes left, but completed the touchdown-onside kick-field goal sequence to force overtime…where Georgia scored a touchdown, held Purdue scoreless, and won the game.

I’ve never heard of anyone on Purdue’s 1979 roster, but that doesn’t mean the Boilers weren’t dominant. Purdue opened as the sixth-ranked team in the nation, but started 3-2 (losses to unranked UCLA and Minnesota, win over fifth-ranked Notre Dame). After that rough patch at the outset, it was smooth sailing for the Boilermakers, who rattled off six wins in a row (the most exciting of which was a 24-21 home win over tenth-ranked Michigan) to finish 9-2 overall and second to Ohio State in the Big Ten. Purdue reached the Bluebonnet Bowl (which was played in Houston until it was discontinued in 1987) and knocked off Tennessee to complete the only ten-win season in school history.

Back when not everyone reached a bowl, Purdue went 8-2 and just missed out on the postseason. Led by quarterback Mike Phipps (a future first-round pick of the Cleveland Browns who was sacked a league-high 44 times in 1973), the Boilers were the pre-season number one team in America. Purdue beat second-ranked Notre Dame in its second game and set up an epic battle with fourth-ranked Ohio State in week four. The Buckeyes dropped the Boilers from the top spot with a 13-0 shutout (Ohio State went on to win the national championship). Purdue went 5-1 over it’s last six games to finish a respectable 8-2, and while they didn’t make a bowl, the excitement caused by that 1-vs-4 matchup in Columbus ensures the 1968 Boilermakers a spot in the top six.

2. 2000 (8-4, lost Rose Bowl)
Here’s the Drew Brees year readers might be waiting for. Led by the future Super Bowl champion signal-caller, Purdue went 8-3 overall and 6-2 in the Big Ten. That 6-2 mark included Purdue in a three-way tie for first in the conference: the Boilers earned the Rose Bowl berth thanks to wins over the other 6-2 teams, Drew Henson-led Michigan and Damien Anderson-led Northwestern. While the regular-season could have been better (Purdue lost to Notre Dame 23-21 on a buzzer-beating field goal), the Boilers entered the Rose Bowl against Washington ranked 14th in the nation. Rick Neuheisel’s Huskies jumped out to a 14-0 lead, but Brees rallied Purdue to a 17-17 tie in the third quarter. From there, game MVP Marques Tuiasosopo took control and the Huskies scored 17 straight points en route to a 34-24 victory. Purdue may not have won this Rose Bowl, but it’s one of only two Purdue appearances in the granddaddy of ’em all, and thus one of the two greatest seasons in school history. 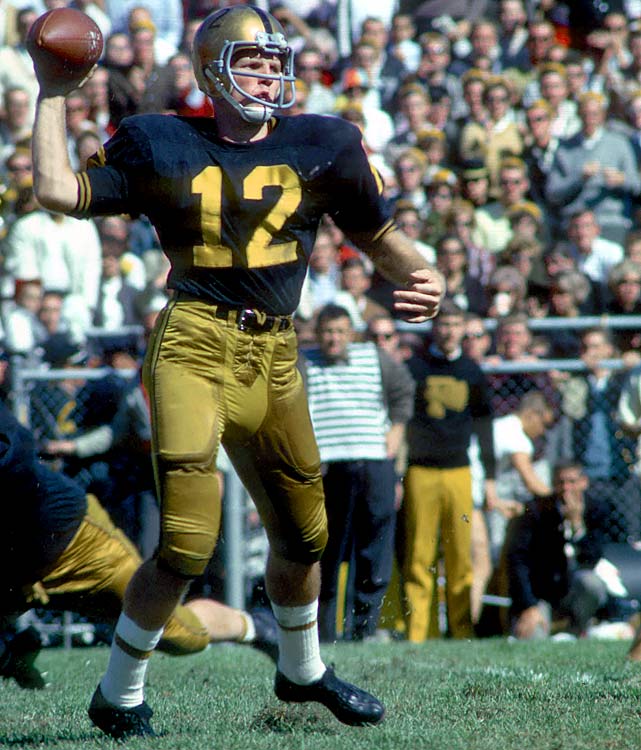 Purdue will celebrate the 50th anniversary of the greatest team in school history next year. The ’66 Boilers were led by two-time Super Bowl champ and NFL Hall of Famer Bob Griese, who finished second to Florida quarterback Steve Spurrier in the Heisman voting. Purdue finished the regular-season 8-2 and ranked 10th in the country, but lost their only two games against ranked teams. Purdue fell 26-14 to eventual national champion Notre Dame, and was routed 41-20 by eventual Big Ten champion Michigan State. The Spartans won the Big Ten, but weren’t allowed to go the Rose Bowl because the conference couldn’t send the same team two years in a row. In this case, the honor went to the conference runner-up, who this year was, you guessed it, Purdue. The Boilermakers made the most of their opportunity, beating USC 14-13. Purdue led 14-7 late in the fourth quarter, when USC scored a touchdown, went for two and the win, and failed the conversion attempt to give the Boilermakers their only Rose Bowl victory in school history.