Posted on November 16, 2015 by WNUR Sports Leave a comment 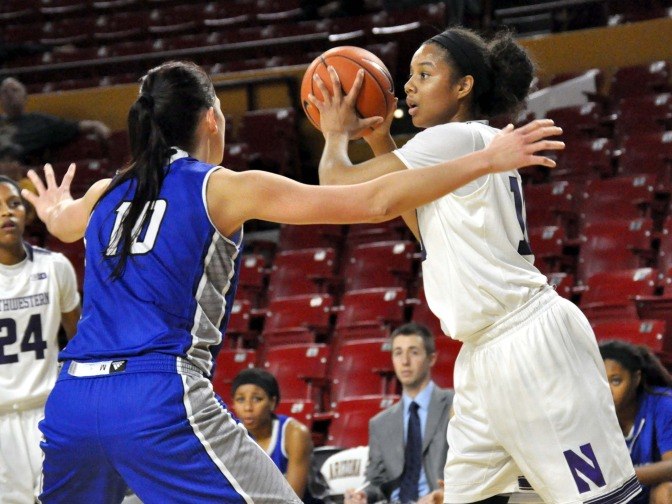 Nia Coffey led all scorers with 27 points as the Wildcats beat Howard on opening night.

The #24 Northwestern Wildcats women’s basketball team leaned on a big outing from a group of juniors in a dominant 89-49 win over the Howard Bison in their season opener.

As was often the case last season, forward Nia Coffey was the focal point of the Wildcat attack, putting up 27 points to lead all scorers.

“I always like to keep the same mentality, just be in attack mode and just do what’s best for my team,” Coffey said after the game. “When the time comes, score, pass, rebound, [I’ll do] whatever my team needs.”

Coffey stuffed the stat sheet for Northwestern, leading the Wildcats with seven rebounds and 4 steals. She was consistently aggressive on the offensive end, getting to the line nine times in the third quarter and 12 times overall.

Fellow juniors Ashley Deary and Christen Inman also played key roles as NU dominated the Bison. Inman finished second on the team with 18 points, while providing the Wildcats with a threat from downtown, going three of five from three-point range.

“I saw [Inman] being very aggressive,” said Deary. “From the [three-point line], getting to the basket, getting boards defensively and that’s what we need from her so she did a great job tonight.”

Deary directed the Wildcats almost seamlessly from the point guard position. She finished the night with 16 points and 7 assists, constantly attacking the basket and setting up opportunities for herself and others.

Throughout the game the Wildcats forced the Bison into bad shots and turnovers and time and time again converted those turnovers into points on the other end. Northwestern finished the game with a 34-12 advantage in the “points off turnovers” department and also held a huge advantage with 14 points off of fast breaks.

“I feel like [defensively] we did a pretty good job,” said Coach McKeown. “Transition is really when we can get going [and] that’s really our bread and butter from an offensive standpoint.”

While many of the upper classmen shined, senior captain Maggie Lyon was largely absent, going 1-8 from the field for three points.

“[She] had a tough night shooting the ball, but that’s the least of my worries.” McKeown said of Lyon. “She’s a great player, great competitor.”

Northwestern went into halftime with a 50-22 lead over the Bison after the trio of juniors came out on fire in the first two periods.

Coffey led all scorers with 17 points at the break and dominated the first quarter in particular. At the end of the first frame the scoreboard read: Howard 13, Coffey 11.

Deary and Inman lead the offensive charge in the second quarter, as the Wildcats outscored the Bison 29-8 during the period. Their combined total of 13 second-quarter points helped push a nine point first quarter advantage to a 28 point halftime lead.

Throughout the opening 20 minutes, the Bison seemed overmatched on the offensive end, shooting only 23% from the field compared to 60% for the Wildcats.

The Wildcats continue their season against Idaho State at Welsh-Ryan Arena on Thursday.