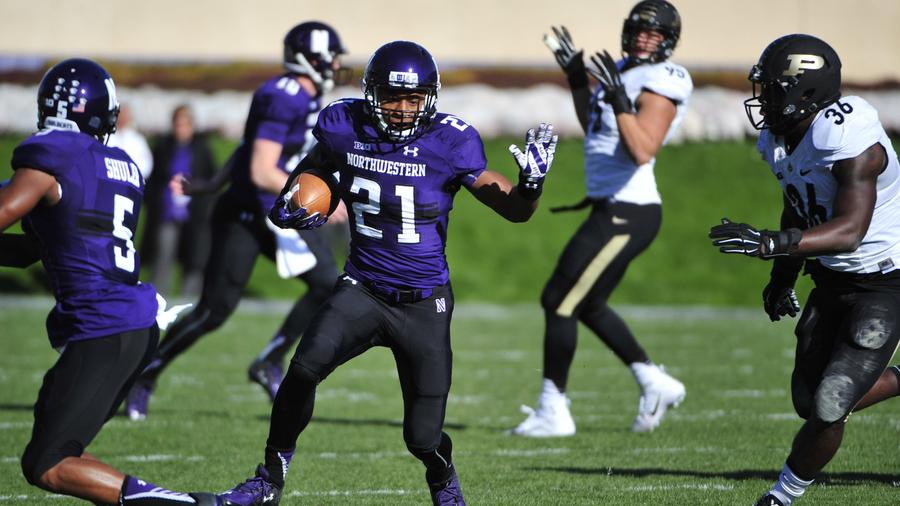 It wasn’t pretty, but the Wildcats came away with a win against the Purdue Boilermakers on Saturday to improve to 8-2 on the season. In a back and forth game, the Wildcats’ defense held strong in the second half, while the offense scored a late touchdown to give the ‘Cats another notch in the victory column. So let’s take a look at the NUmbers behind Northwestern’s eighth victory of the season.

Factoring out Purdue’s two scoring drives, the Wildcats allowed the Boilermakers just 221 yards of offense, averaging 3.29 yards per play. Excluding those two scoring drives, both on the first Purdue possession of each half, Northwestern’s defense played relatively well, bending but not breaking and keeping Purdue out of the red zone. It wasn’t Northwestern’s best defensive performance but any means, but it’s not like the unit played awful. There were areas for improvement, but the defense kept Northwestern in the game when they could have easily fallen apart amidst multiple Wildcat turnovers.

Another week, and another outstanding performance by Justin Jackson. The ball carrier had 24 carries for 116 yards and a touchdown, leading the way for Northwestern’s offense. Even with a banged up and inconsistent offensive line, Jackson continues to find holes and churn up yardage. And for the second straight season, Jackson surpassed the 1,000 yard mark. With Northwestern passing offense failing to do much on Saturday, Jackson, along with Warren Long, stepped up and were able to get much-needed yards while finding the end zone three times.

While a bit inconsistent on defense, Northwestern was largely able to stop the run on Saturday. The Boilermakers did most of their damage through the air, as Purdue only averaged 2.4 yards per carry. Lead running back Markell Jones was held to only 58 yards on 13 carries before leaving the game in the third quarter with an injury; Jones was coming off a couple of nice performances the past two weeks against Nebraska and Illinois. The rush defense has been solid for Northwestern in 2015, allowing less than 4 yards per carry. Even with the injury to star Wisconsin running back Corey Clement, Northwestern will need a similar effort defending the run in Madison next week in order to beat the Badgers.

The ‘Cats had three turnovers on Saturday, and all of them were of the preventable, ill-advised variety. Clayton Thorson had an avoidable interception while rolling out on a third down play with time to throw. Zach Oliver followed that up with an interception of his own when he went into the game, giving the ball back to Purdue and negating big plays by Mike McHugh and Solomon Vault earlier in the drive. Justin Jackson also had an uncharacteristic fumble that gave Purdue the ball in Wildcat territory. The defense held Purdue without any points off those turnovers, but those self-inflicted mistakes won’t be easy to overcome against teams more talented than the Boilermakers (almost everyone).

This number is significant for Clayton Thorson in a couple of ways. He struggled mightily for much of the game–going 9-of-19 passing for only 82 yards–and his longest completion of the day went for only 16 yards. That effort was bad enough for Pat Fitzgerald to temporarily bench Thorson for backup Zach Oliver, who didn’t fare much better. When Thorson went back into the game after what Fitzgerald called a “breather,” he made two big plays with his feet to keep Northwestern’s late touchdown drive alive. His two consecutive 16-yard scrambles converted a key 3rd-and-13 and moved the ‘Cats from outside field goal range to the Purdue 5-yard line; Jackson scored the deciding touchdown three plays later. Ultimately, Northwestern must find a more consistent passing attack to beat quality teams. That being said, Thorson’s speed, creativity and elusiveness make him dangerous, and he can occasionally bail out the offense with a scramble when the play looks to be going nowhere.