Posted on November 17, 2015 by Michael Stern Leave a comment 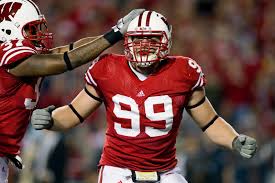 JJ Watt starred at Wisconsin in the late 2000s, and his two younger brothers are on the Badgers’ current roster.

The Badgers enter Saturday’s game at 8-2, same as the Wildcats. Wisconsin has battled through several injuries to reach eight wins, and the Badgers’ only two losses have come against Alabama and Iowa. Projected starting running back Corey Clement has played only two games, but could return for the Northwestern game. Reserves Dare Ogunbowale and Taiwan Deal have filled in well for Clement. Joel Stave is back at quarterback, and he relies heavily on Alex Erickson in the passing game. Linebacker Joe Schobert (15.5 tackles for loss) and quarterback-turned-defensive back Tanner McEvoy (4 interceptions) anchor the nation’s third-best total defense.

Wisconsin also has two players with a familiar last name: fullback Derek Watt has 13 receptions out of the backfield, while linebacker TJ Watt has played sparingly in the Badgers’ first 10 games. Derek and TJ’s older brother JJ played at Wisconsin in 2009 and 2010 before starting a dominant NFL career with the Houston Texans.

If either of the younger Watts join JJ in the NFL, the Watt clan will join an exclusive club of siblings to play football at the highest level. Who are the most interesting active sibling groups playing in the NFL? I’m glad you asked. I’ve ranked the top six sibling groups, based on a variety of factors including skill level, other NFL relatives, and interesting stories. I’ve also decided to leave off Peyton and Eli Manning because, well, that would be too easy.

Rob Gronkowski is the family’s bread-winner (three Pro Bowls and a Super Bowl victory with the Patriots), but his older brothers Dan and Chris also moonlighted in the NFL. Dan was selected by the Lions in 2009 out of Maryland, and played briefly for Detroit, Denver, Cleveland, and New England until 2011. Chris went to Arizona (same as Rob), and went undrafted, but spent one season each with the Cowboys, Colts, and Broncos. The most exciting news from the Gronkowskis is that a fourth brother could be on the way to the NFL. Glenn Gronkowski is a redshirt junior at Kansas State, where he’s had eight carries and three receptions this season. Having four brothers all play in the NFL is rare enough, but the fact that these four brothers are all tight ends or fullbacks guarantees the Gronks a spot in the top six. 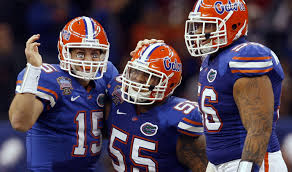 The Pouncey brothers celebrated often with Tim Tebow at Florida before becoming Pro Bowl offensive linemen in Pittsburgh and Miami.

The Pounceys are twins who have both become Pro Bowl offensive linemen. In college, Maurkice started 39 games over three seasons at Florida, declaring for the draft after being named a consensus All-American as a junior. Maurkice was a first round draft pick of the Steelers, and he made four Pro Bowls for Pittsburgh in his first five seasons. Mike also came to Florida as an offensive linemen, but he played defensive line as a freshman before moving back to the offensive line for his next three seasons. When Maurkice declared for the draft, Mike replaced him at center and was a first-team All-American. He was a first round pick of the Dolphins, and made two Pro Bowls in his first four seasons. In total, the brothers have played nine NFL seasons and reached six Pro Bowls. 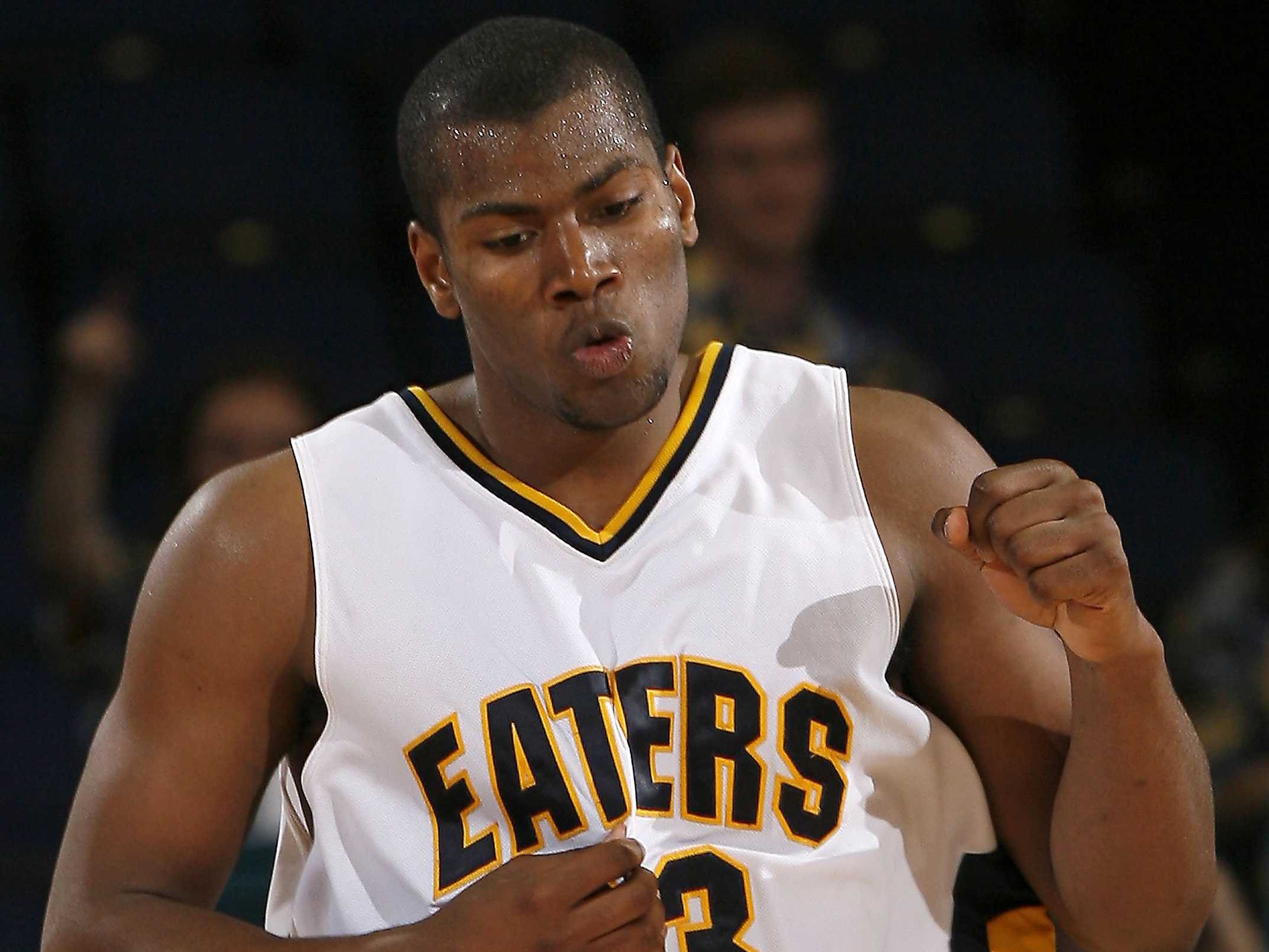 Darren Fells played basketball at UC Irvine. He is currently an NFL tight end, as is his brother Daniel, even though neither brother played FBS football.

The most interesting siblings in the NFL, Darren and Daniel are both NFL tight ends even though neither brother played FBS football. Daniel played tight end for FCS UC Davis, then bounced around practice squads for three years before finding a home in St. Louis. After three seasons with the Rams, Daniel joined the Broncos and caught two passes in the postseason. Daniel moved from Denver to New England, then from New England to the Giants, where he is currently on injured reserve after surviving a MRSA infection. Darren’s journey to the NFL is stranger than his brother’s: he played basketball at UC Irvine and then internationally for five years in Belgium, Finland, France, Mexico, and Argentina. In 2013, Darren returned to America to play football for the Seahawks, and after a year in Seattle he landed in Arizona. Darren still plays for the Cardinals, and he caught a touchdown in Arizona’s playoff loss to Carolina last year.

Kyle and Chris Long are NFL linemen, as was their father, Hall of Famer Howie Long. Howie played defensive line for the Raiders, reaching eight Pro Bowls and winning a Super Bowl. His older son Chris, also a defensive lineman, was the second overall pick out of Virginia in 2008. Chris has spent his entire career with the Rams, played in the first 96 games of his career, and has never made a Pro Bowl. Chris’s younger brother Kyle was selected by the Bears in the middle of the first round out of Oregon in the 2013 draft. Kyle reached the Pro Bowl in each of his first two NFL season. As Chris is a defensive lineman and Kyle is an offensive lineman, the Long siblings can compete against each other directly on the football field. This fact does not go unnoticed, especially because Howie is an analyst for the NFL on FOX.

The Matthews family breeds football players. Brothers Clay Matthews, Jr. and Bruce Matthews starred at USC and became first round draft picks. Clay, Jr. played 15 seasons at linebacker for the Browns and reached four Pro Bowls. Bruce played 18 years as an offensive lineman for the Titans, reached 14 Pro Bowls, and became a Hall of Famer. Both Clay, Jr. and Bruce have sons in the NFL today. Clay, Jr.’s sons, Clay III and Casey, play linebacker. Clay III went to USC, and has played in five Pro Bowls and won a Super Bowl with the Packers. Casey went to Oregon, and has played sparingly for the Eagles and Vikings. Bruce’s sons, Kevin and Jake, play offensive line. Both played at Texas A&M, and while Kevin’s NFL career never got off the ground, Jake was a first round draft pick of the Atlanta Falcons and is in his second season. 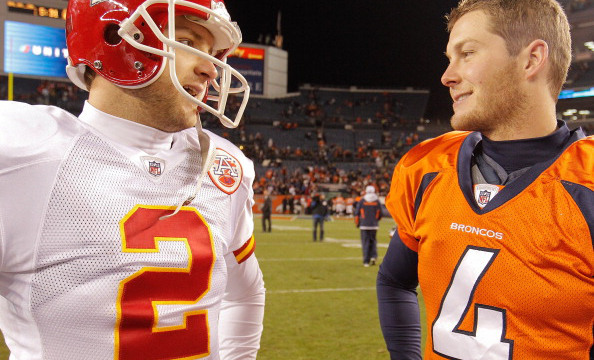 The Colquitt, brothers, Dustin and Britton, both punted for Tennessee and both punt for AFC West squads. (Photo by Justin Edmonds/Getty Images)

What’s the only think better than a multi-generational dynasty of linebackers and linemen? A multi-generational dynasty of punters, of course! Jimmy Colquitt punted at Tennessee in the mid-80s, then punted 12 times for the Seahawks in 1985. His brother Craig punted for the Vols in the late 70s, then punted for two Super Bowl champion Steelers teams in 1978 and 1979. Craig’s two sons, Britton and Dustin, are current NFL punters who played their college ball at, you guessed it, Tennessee. Dustin graduated in 2005, and has punted for the Chiefs ever since, reaching the Pro Bowl in 2012. Britton left Knoxville in 2009 and eventually latched on with the Broncos, where he remains the punter today. Britton has never made a Pro Bowl, but he has punted in the Super Bowl! The Colquitt brothers matched up last Sunday, as Dustin’s Chiefs topped Britton’s Broncos. Dustin also got the better of Britton, as four of Dustin’s five punts landed inside the 20, while none of Britton’s six did.