Posted on November 21, 2015 by WNUR Sports Leave a comment 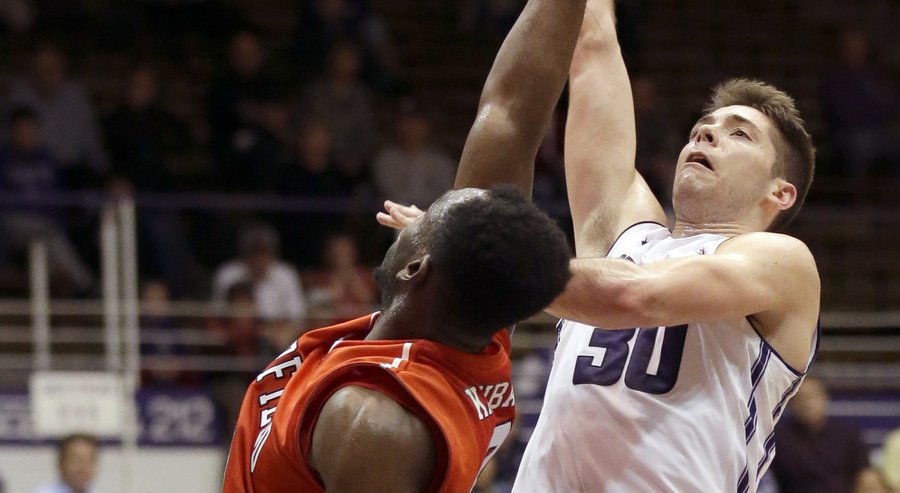 “I knew this was going to be a really tough game,” Chris Collins said following Northwestern’s 83-80 overtime win over the Columbia Lions.

Tough is an understatement. Immediately, the Lions came out with far more energy than the ‘Cats and earned every bit of a 17-5 lead. The ‘Cats did a nice job of crawling back, and managed to tie the game up at 26. But as quickly as that momentum came, it went, as Columbia finished the half on a 9-2 run.

If it seemed to you like Columbia was the better team for most of the night, you are not wrong. For 93.1% of regulation, the ‘Cats were trailing. Fortunately for Northwestern, the winner is not determined till the final buzzer.

What allowed the ‘Cats to get the ‘W’ was the play of their guards, Tre Demps and Bryant McIntosh, who, as Coach Collins said, “…played like stars tonight.” Another understatement by the coach, because these two young men played like super-stars.They kept NU in the game when they were struggling (Demps and McIntosh scored NU’s first 17 points of the game) and made the big plays down the stretch.

Northwestern needed their senior guard to end his poor start to the season (30.4% shooting in first two games) in this one, and he certainly came through. 22 points on 47.4% shooting, while dishing out 6 assists and only turning the ball over twice. When asked about his breakout game, Demps gave the credit to those around him. “I’ve always struggled at the beginning of seasons. Credit to Coach and my teammates, just telling me to forget about that.”

Bryant McIntosh, who just happened to be celebrating his 21st birthday, put on quite a show. McIntosh shattered his previous career high of 22 points by scoring 32. When asked about McIntosh’s performance, Demps said, “He’s playing on a whole other level.” Despite only being 3 games into his sophomore year, McIntosh has shown a propensity to step his game up in the biggest moments. Tonight was no different, as he scored 21 points in the 2nd half and OT, including a jump shot with 40 seconds remaining in regulation to tie the score. Asked about his birthday/celebration plans, McIntosh said, “Just dinner with my girlfriend and bed. I’m pretty tired.”

With Demps and McIntosh putting on such a great show, it is easy to forget about the guy who Coach Collins credited with changing the game: Gavin Skelly. While his stats may not jump off the box score (5 points and 5 rebounds in 15mintues), Skelly brought energy to a ‘Cats team that was sorely missing it. Skelly, who did not play at all in the 1st half, was not happy with what he was seeing. “We weren’t playing hard,” Skelly said after the game. Not only did Skelly energize his teammates, but he also gave life to a previously uninspired crowd. “Down the stretch I thought the students were fantastic,” Coach Collins said.

With the win, Northwestern improves to 3-0 for the 5th time in the last 6 years. The schedule will only get tougher for the ‘Cats, who will soon pack up and head to Kansas City, Missouri to take on the UNC Tar Heels on Monday night.