Giving Effusive Thanks: Northwestern vs. Wisconsin

Posted on November 26, 2015 by Erik Bremer Leave a comment 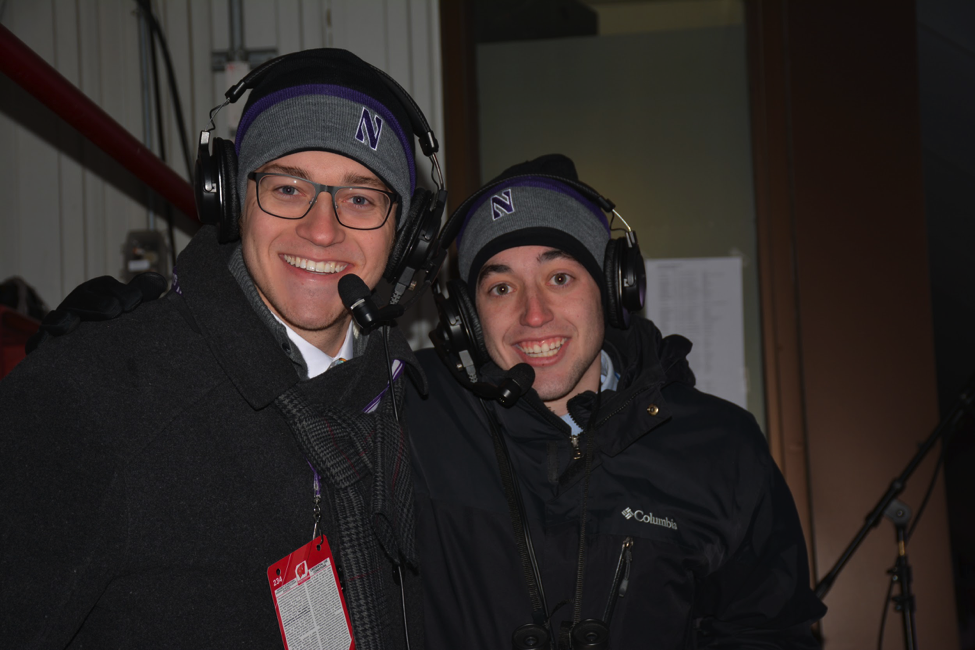 In case you haven’t heard, Northwestern won a pretty big football game Saturday.  In a game that featured three Wisconsin touchdowns called back, including two in the final minute, the Wildcats held off the Badgers 13-7 to win their first game at Camp Randall since 2000.  Northwestern had 60 passing yards.  Wisconsin had -26 rushing yards.  It was really weird.

I was at the game, and a lot of things happened to me over the course of the day.  I’ll start from the beginning, and hope you’re with me until the end.

I was on color commentary duties for WNUR Sports along with play-by-play man Nick Scoliard and our sideline reporter Max Gelman.  Our station travels with the team for road football games, which in this case meant that we arrived at Ryan Field late Friday morning and boarded a bus to Madison.  It’s a really great setup, and something that not many students get to do.  It’s also something that Northwestern doesn’t have to do, but to their merit they recognize the educational value these trips have for aspiring broadcasters.

On a personal note, this was likely my final in-person football game during my time at Northwestern.  Saturday also marked the end of a grueling 11 days in which I called six games in four different sports.  Prep for 10 teams in addition to a heavier-than-usual load of classes has made for quite an end to my fall quarter.  Sleep has been at a premium.

As a consequence, I was less than thrilled when our hotel room received a 7:30 a.m. wake-up call on Saturday morning.  Apparently the entire Northwestern block of rooms receives the same friendly reminder whether you’re a player or a lowly broadcaster.  Coach Pat Fitzgerald has made headlines in recent years for his unorthodox attention to his players’ sleep patterns.  I wonder if he knew I was in REM when my phone rang.  Oh well … a learning experience!

Thanks, team hotel that will remain nameless for privacy and/or marketing reasons.

After a nice hotel breakfast (pro tip: regardless of where you stay, the eggs are always the worst part of the spread), we prepared for the bus to the stadium.  But about 20 minutes before leaving, we received an email from the Badgers communications team that we would be broadcasting the game outside.

For reasons relating to decorum, we typically dress in a suit and tie for our radio broadcasts.  In case you’ve never worn a suit, it’s not exactly the warmest garment in one’s wardrobe.  Now, this wouldn’t be a huge issue if not for the fact that Madison received a foot of snow amidst swirling winds and temperatures in the mid-20s between Friday and Saturday.  According to my conversations with stadium workers, it was the worst combination of temperature and precipitation for a Wisconsin football game in my lifetime.

I’m from Minnesota and Nick is from Rhode Island.  We own several jackets, parkas, scarves, hats, gloves, boots, etc.  Unfortunately for us, it was all back in Evanston.  Even the heaviest packers would probably avoid bringing bulky winter gear if they expected to spend their entire day in a glassed-in booth.  This left me and Nick in a very frostbite-y situation.

Before my pregame interview with Coach Fitzgerald (another privilege we at WNUR are grateful for), I flagged down Northwestern’s Assistant Athletic Director for Communications Paul Kennedy and asked him if there was a way to buy gear from the football equipment team for our outdoor broadcast.  I was gonna have to get something anyway, and I’d rather have the Northwestern “N” than an ugly Bucky hat I’d be contractually obligated to burn after the game.  He said he would see what he could do.

After I interviewed Fitz in the end zone (which you can listen to by clicking here) I walked off the field with WGN Radio’s Dave Eanet, a WNUR alum and the voice of Northwestern Football for the past 25 years.  We walked and talked toward the press elevators and waited in line to get in one of the two cars.  As we reached the front of the line, both elevators stopped responding.  Understandably hesitant to wait for elevators that were stuck, we opted to walk up to the press box through the concourse.

(I have no idea how the elevator situation was resolved.  For all I know, those poor folks are still stuck in there.)

Walking up eight floors of ramps takes a lot of time, so I used the opportunity to pick Mr. Eanet’s brain about his experiences calling games in cold weather (he’s a windows-open kind of guy) and his thoughts on the upcoming game (he thought Northwestern stood a pretty good chance despite what the prognosticators were saying).  I also got to ask him about my favorite Northwestern thing on the internet, a 1995 Rose Bowl highlight film called “Taking the Purple to Pasadena” (they were really proud of it at the time).

After we got to the broadcast level, I bid Dave adieu and began looking for WNUR’s designated area.  After a few minutes of searching, I found a table nestled at the bottom of the press box stairwell beside some bleachers. 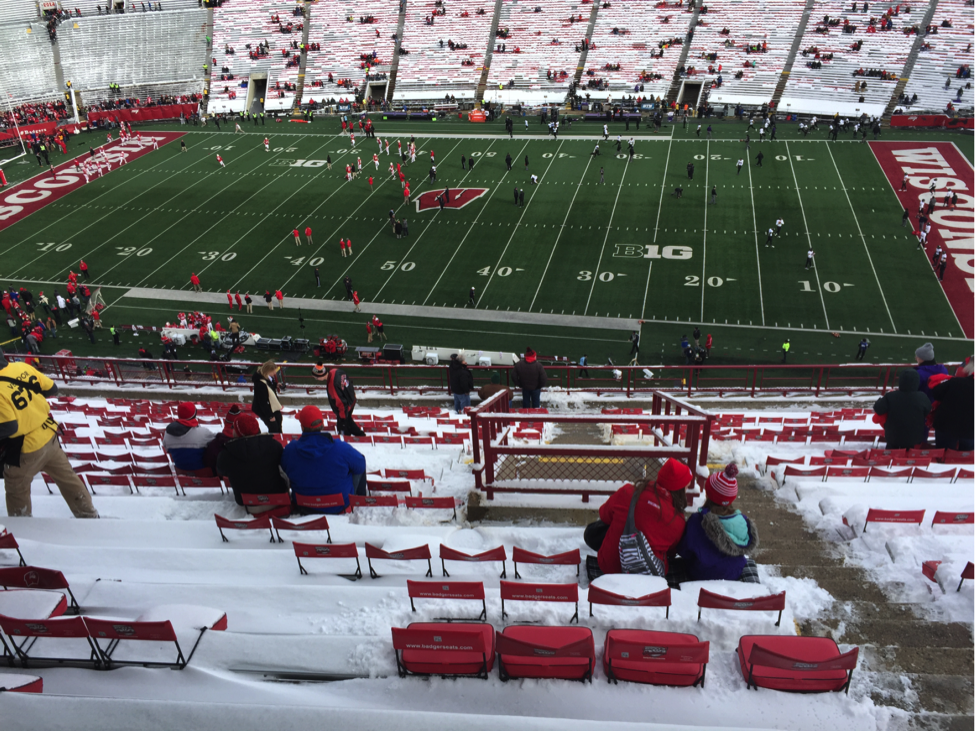 All things considered, it wasn’t that bad.  We were covered overhead by the underbelly of the print media press box, and most of the wind was batted down by the time it got to us.  The temperature, though, remained an issue, and within a half hour my fully-charged phone decided to turn off and not turn back on.

This has happened to me several times before, but this was the first time that it didn’t happen on the middle of a frozen lake while fishing for walleye.  Something tells me the bright minds in Cupertino don’t have these elements on their minds when they design their cutting-edge technology.

Right after our broadcast team got our equipment set up, Northwestern’s Kyle Kelley came bearing gifts.  Nice Northwestern stocking caps and Under Armour gloves for the whole crew.  Paul, Kyle, and the equipment staff may have saved my hands.

Thanks, Kyle and the equipment staff.

As for the game itself, I’m not sure there’s much to be said that hasn’t been said elsewhere.  I was at Northwestern’s overtime win at Notre Dame last year, and it was like that plus snowballs and a whole lot of angry Wisconsinites.

We would know, too, because our broadcast was quite literally among the fans.  Without a replay monitor or a phone to check Twitter, our opinions of some incredibly controversial calls were colored by fan reaction.  And while the “Jump Around” is one of the coolest traditions in college football (sorry, Ben Goren), it becomes considerably less fun when you’re directly beneath a press box that’s audibly groaning from the united convulsion of 80,000 people.

Thanks, House of Pain.

After Wisconsin’s go-ahead score was overturned (no, not that time. The one in the fourth quarter.  No, not the completion to the one-yard line.  The one in the end zone that really, really looked like a catch), Northwestern stormed the field and Badger fans sulked away angry and shivering.  The WNUR team endured a few barbs from departing fans, but we quickly made our way back to the buses. 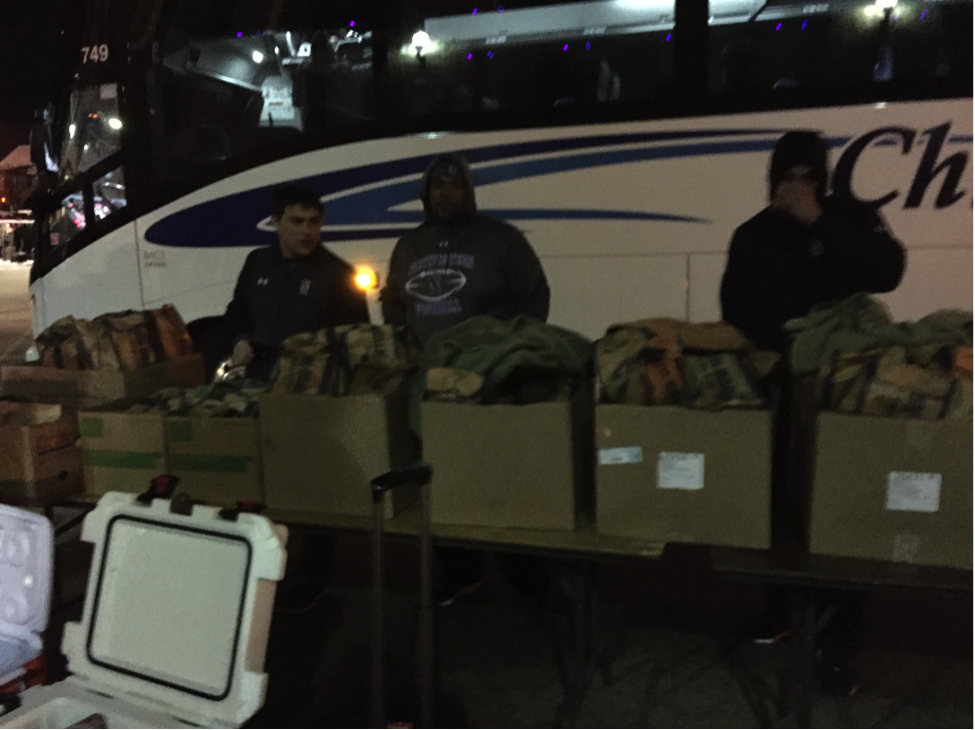 Thus began the three-hour drive back to Evanston.  The en-route entertainment was Southpaw, a boxing movie from earlier this year that I missed in theaters.  The irony of an underdog overcoming the odds to beat the favorite via an official’s decision was not lost on me. 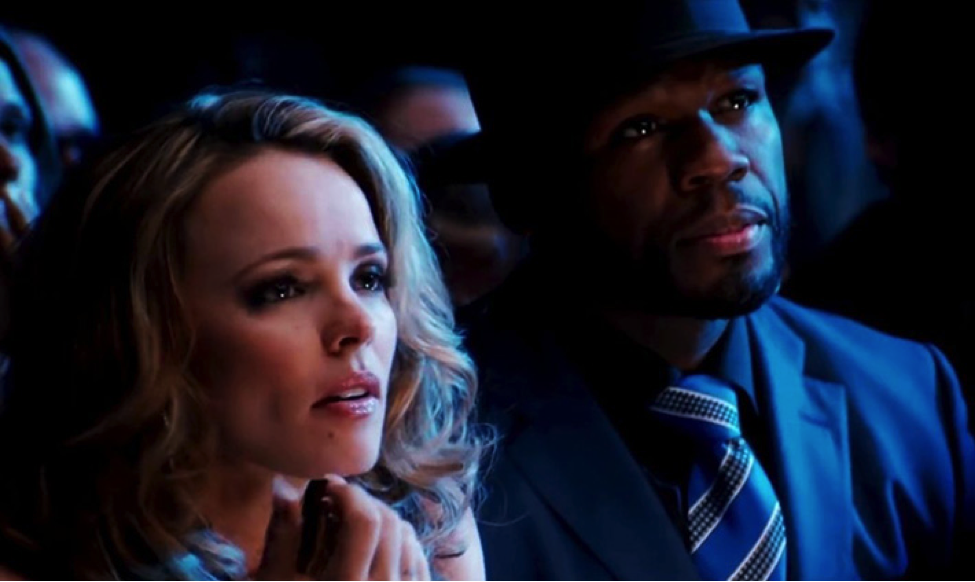 We got back to Ryan Field a little before 10 p.m., where approximately 11 inches of snow had fallen since I parked in the student lot on Friday.  I don’t necessarily enjoy snow, but I typically tolerate it for the first month or so and then start wishing for spring.  This year, the honeymoon period lasted less than a day.

As I gingerly walked in my loafers to my car, the Willie the Wildcat “mascot coordinator” (wink, wink) asks me for a ride.  I oblige, because you never know when you might cross paths with the next Craig Sager.

So it’s me, Nick, Max, and “Willie” working to push snow and ice off my car.  I have my handy Justin Morneau ice scraper (another story for another time), but it’s slow going.  After going at the driver’s side of the windshield for a few minutes, I look up and see someone else helping me on the passenger’s side.

Pat Fitzgerald is scraping ice off my car.

I don’t really know what to say, so I don’t say anything.  It’s the Midwestern way, after all.  I let him scrape away for a few more seconds before I thank him and tell him that I can handle the rest.  As he walks away, I congratulate him on the win and he delivers a quip about accepting what he’s given.  If it were delivered in front of a microphone it would sound like an empty platitude, but in an empty parking lot it sounds a lot more genuine.

With my windshield on defrost and 4-wheel drive enabled, I white-knuckle my way down Sherman Avenue and drop everyone off.  I then go back to my apartment and sleep for, like, 12 hours, because I probably came down with pneumonia or something.

But I walk away from my final WNUR football broadcast with quite the story and more than a few reminders why I’m thankful this year.  Happy Thanksgiving, and Go ‘Cats.